Hailed by some as the greatest living American songwriter, Motown star Smokey Robinson has been composing and singing rhythm and blues hits for more than three decades.

Growing up a "Miracle"

William "Smokey" Robinson Jr. was born on February 19, 1940, in Detroit, Michigan, in the rough Brewster ghetto, a poor and generally dangerous neighborhood. Young Smokey grew up listening to his mother's records, including the works of B. B. King (1925–), Muddy Waters (1915–1983), John Lee Hooker (1917–2001), Sarah Vaughan (1924–1990), and Billy Eckstine (1914–1993). These black artists, he commented in Rolling Stone, were "the first inspirational thing I had." When Robinson was ten, his mother died, and his sister Geraldine took him in, raising him along with her ten children. The family was poor but close-knit, and Robinson spent his youth writing songs and singing in local bands. 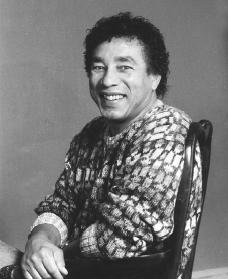 Smokey Robinson.
Reproduced by permission of
AP/Wide World Photos
.
school, and even then he tried barber school and courses in dentistry before giving his full attention to music. In 1954 he formed a rhythm and blues (a form of music combining jazz, blues, and other musical styles) group called the Matadors; the name was changed to the Miracles three years later when a female singer, Claudette Rogers, joined the group. Rogers married Robinson in 1959. At first the members of the Miracles—who were each paid five dollars per week by their agent, Berry Gordy (1929–)—found the music business difficult.

Robinson was lucky to have encountered Berry Gordy during an audition for another agent; Gordy, then a fledgling (just starting out) music producer on a limited budget, was equally fortunate to have found Robinson. Gordy began to produce the Miracles' singles in 1958, collaborating with Robinson on lyrics and tunes. Their first release, "Got a Job"—an answer to the Silhouettes' number one hit "Get a Job"—hit number 93 on the nationwide Billboard Top 100 chart. The debut was encouraging, but nothing prepared Gordy and Robinson for the limelight they would gain in 1960. Late that year they released an upbeat single, "Shop Around," that became a chart-topping million-seller. The Miracles became a national phenomenon, and Gordy was able to launch Motown Records, a landmark production company that introduced such talents as Diana Ross (1944–) and the Supremes, Stevie Wonder (1950–), Marvin Gaye (1939–1984), and the Temptations.

Robinson and the Miracles were Gordy's first star-quality group, and they continued their association with Motown as the company grew. Indeed, Robinson wrote hit songs not only for his group but for other Motown headliners as well.

Throughout the 1960s, especially in the latter half of the decade, the Motown sound competed with the music of the British invasion (the sudden appearance of extremely popular British bands, led by the Beatles and Rolling Stones) for popularity among America's youth. Robinson and the Miracles were favorites among the Motown personnel, earning more than six gold records (five hundred thousand or more records sold) containing such hits as "The Tracks of My Tears," "You've Really Got a Hold on Me," "I Second That Emotion," and "Ooo Baby Baby." Still, Robinson was on the verge of leaving the group in 1968 when his son Berry was born. He reconsidered almost immediately, however, when the Miracles single, "Tears of a Clown," became a number one hit, first in England and then in the United States. Robinson left the Miracles in 1972; the band went on without him until the late 1970s.

For a time after leaving the Miracles, Robinson concentrated on his business duties as vice president of Motown Records. He soon returned to recording, however, this time as a solo artist. His solo albums are, on the whole, more thoughtful and mellow than his work with the Miracles.

Inducted into the Rock and Roll Hall of Fame

Robinson's records of the late 1980s, when he was well into his third decade in the music business, continued to gain popularity and the approval of critics. A People magazine reviewer found that on his 1986 album Smoke Signals, for example, the singer "remains a uniquely resilient performer." His 1987 album entitled One Heartbeat was termed "another winning package of sharp, sophisticated soul" by a reviewer from Rolling Stone. Robinson hits like "Cruisin'," "Just to See Her"—a Grammy Award winner—and "Being With You" became both rhythm and blues and pop hits. Coupled with his success with the Miracles and as a major Motown song writer, Robinson's solo achievements in the music industry led to his 1986 induction into the Rock and Roll Hall of Fame, and in 1989 he was named a Grammy Living Legend.

Coping with such enormous fame has not always been easy for Robinson. He wrote of his personal struggles in his 1989 collaboration with David Ritz, Smokey: Inside My Life. Musician writer Jon Young remarked that the autobiography (a story that recounts one's own life) "documents everything from [Robinson's] family history and the early days of the Miracles to his extramarital affairs and, most striking, a graphic account of two years in the [depths] of cocaine addiction in the mid-'80s." When asked why he chose to provide such candid details about his drug addiction, Robinson responded to Young, "I wrote it because it was God's will.… I was saved from drugs in 1986 when my pastor prayed for me. I never went to rehab or to a doctor. It was a miracle healing from God, so that I could carry the message about the perils of drugs. At the time I was saved, I was already dead. You are now speaking to Lazarus."

With the onset of the 1990s, Robinson's contract with Motown Records expired and after a long and productive career with the record company, he moved to SBK Records. With SBK, Robinson released a well-received album he coproduced and recorded in less than six weeks, 1991's Double Good Everything.

Also in 1991 Robinson ventured into previously unchartered areas of the music world, considering an album of country-western tunes and penning the score for a Broadway musical titled Hoops, which presented the history of the Harlem Globetrotters basketball team.

Musical productivity and recognition for his accomplishments have not slowed for Smokey Robinson. In 1999 he released the well-received Intimate album. Two years later Smokey Robinson and the Miracles were inducted into the Vocal Group Hall of Fame & Museum, which is dedicated to "honor the greatest vocal groups in the world."

I honestly feel that Smokey Robinson is one of most incredible Artist/Producers living His songs have been an intregal part in my life from my days as a young girl at her first 8th grade prom to the Grandmother of 4 I have followed him through the years by his melodies and can almost call him family. There will never be another "Oooh Baby Baby". Love you from afar. A fan for life.
2
Tina Williams

I love all of Smokey Robinson's songs from the 1950's, 1960's 1970's and the 1980's and etc. I think that he is a beautiful person and very down to earth. I used to watch him alot on televison when I was a little girl. My dad and mom used to play all of his records along with aretha's records too. Here I am at the age of 41 listening to his sweet soul miusic. I was born in 1969. Some people would ask me, "why do you listen to smokey robinson?" "You don't know him because you were too young or you weren't born yet." I figure by my parents played and listened to his and other Motown artist has really influenced me to listen and understand music more. These music today it doesn't make any sense to me than the older music. I like the oldies even motown music. I wish that Smokey Robinson would come to Muskegon Michigan. I would like to see him in person with his beautiful silky voice. I love you very much Mr.Smokey Robinson and God bless you. You have a gifted talent keep on singing because there is only one Smokey Robinson. Your music has really as given the inspiration to get through the day.
3
Doris Bryant

I will always love Smokey Robinson and all the singers associated with Motown. They were always neat, clean, classy and sophisicated. Unlike the stars today, half dressed, pants sagging. I am 46 years old and love all of motown music. I love old school. I don't even buy music anymore. I don't know what today's stars are singing. They don't even know what they're singing. Hail to the Kings and Queens of Motown. I love all of you.
4
Johnnie Johnson Jr.

I have always been a tremendous fan of William Smokey Robinson. I love everything he has
ever written. My all time favorites currently are "Here I Go Again," and "I Love Your Face."
One can never, ever actually have a favorite relative to Mr. Robinson. I love Baby Come Close,
Oh, Oh Baby Baby, The Track Of My Tears and The Fork In The Road. The man is a master lyricist.
His lyrics are full of passion and compassion. I had an opportunity to see him at the Wolf Trap in Virginia about three years ago one August evening. It was a phenomenal experience. One additional thing I share with him is that I was born on February 18th, eight years after and 1 day before his birthdate. I hoped that he is an Aquarian like myself. I screamed from my sixth row seat for him to sing "Here I Go Again" to no avail. When he invited this young person to the stage I prayed that he would pick me. I would have loved to sing "Here I Go Again" with this incredible person. I love the song "Holley" also. It tells a remarkable story. Everyone should hear this song. God bless Mr. William "Smokey" Robinson.
5
Lucille Franco

I as many others love Smokey Robinson. I came to know of Smokey when I was at an amusement park in Asbury N.J. I was playing the wheel game and won on #31 my birthday,so I picked his album not knowing who he was and after listening for the first time I became a fan. I am 58 today and more than ever love his music and all of Motown. There will never be music like Motown. He is an incredible and talented artist. I had been able to go to a few of his shows and even lucky enough to get a picture with him. That in itself was a dream of mine. Continue to sing and thank you for being a part of my life through your music. God bless you and your family and Happy Birthday!
Smokey Robinson...
6
Thelma Johnson

I fell in love with Smokey Robinson when I was a little girl I had a mad crush on him. My sisters were much older than me and played his music, Mavin Gate, the Supremes hey were true Artist very classy and full of love and compassion nothing like the Artist today I too don't understand half of what they R saying there is too much violence and sexual deplotation in this mordern day music I am still in Love with Sthokey
7
gwendolyn ford

Smokey Robinson has a very unique voice. there was no other singer in the sixties that sound like smokey like I said he has a very unique and beautiful voice. as a matter of fact all the singers who were signed with motown records could really sing there will never be another motown every group are solo singer with motown could sing. and like i said i grew up in the sixties and our teen age days were complete because of the motown sound. when we found out one of motowms groups are solo singers had a new record out we would race down to joe's music shop to buy it i thank god for smokey robinson and the whole motown family and i especially thank him for Mr. Berry Gordy.