The German film director Leni Riefenstahl achieved fame and notoriety for her film Triumph of the Will, which critics believed to be propaganda, or material created to spread beliefs, of Adolf Hitler's (1889–1945) army, the Third Reich.

Early career as a dancer and actress

Helene Berta Amalie Riefenstahl was born in Berlin, Germany, on August 22, 1902. Her father, Alfred Riefenstahl, who owned a plumbing firm, and her only brother, Heinz, died in World War II (1939–45; a war fought between the Axis powers: Germany, Italy, and Japan—and the Allies: England, France, the Soviet Union, and the United States). As a child she enjoyed reading, painting, and dancing. Early on she decided to become a dancer and received thorough training, both in traditional Russian ballet and in modern dance with Mary Wigman (1886–1973). By 1920 Riefenstahl was a successful dancer touring cities such as Munich, Dresden, and Frankfurt, Germany; Prague, Czechoslovakia; and Zurich, Switzerland.

By 1924 Riefenstahl's dance career was over after she suffered a serious knee injury. It was during her recovery period that her life would change forever when she saw one of the popular mountain films of Arnold Fanck. With characteristic determination and energy she set out to meet Fanck and talk him into offering her an acting role in his Der heilige Berg ( The Holy Mountain, 1926). The film was well-received, and Riefenstahl made up her mind to stay with the relatively new medium of motion pictures. Over the next seven years she made five more films with Fanck. In Fanck's films Riefenstahl was often the only woman in a crew of rugged men who were devoted to adding the beauty and dangers of the still untouched high mountains onto their action-filled adventure films. Not only did she learn to climb and ski well, she also absorbed all she could about camera work, directing, and editing.

Eventually Riefenstahl dreamed up a different kind of mountain film, more romantic and mystical, in which a woman, played by herself, would be the central character and which she herself would direct. Das blaue Licht ( The Blue Light, 1932) was based on a mountain legend and was shot in remote parts of the Tessin and the Dolomite mountains in northern Italy. It demanded—and received—a great deal of dedication from those involved, many of whom were former associates of Fanck's who continued to work with Riefenstahl on other films. The Blue Light won praise overseas, where it received the silver medal at the 1932 Biennale in Venice, Italy, and at home, where it also attracted the attention of Adolf Hitler.

Films for the Third Reich

When Adolf Hitler came to power in 1933 he asked Riefenstahl to film that year's Nazi Party (Hitler's political party) rally in Nuremberg, Germany. Sieg des Glaubens ( Victory of Faith, 1933) has been lost; presumably it was destroyed because it showed party members who were soon afterwards killed by Hitler. Hitler then invited Riefenstahl to do the 1934 rally as well, a task she claimed to have accepted only after a second "invitation" and the promise of total artistic freedom.

Triumph des Willens ( Triumph of the Will, 1935) is considered by many to be the propaganda film of all times. (Later, Riefenstahl maintained she intended the movie to be a documentary.) Carefully edited from over sixty hours of film by herself, with concern for rhythm and variety rather than chronological (order of time) accuracy, it emphasized 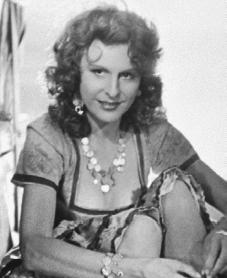 Leni Riefenstahl.
Reproduced by permission of the
Kobal Collection
.
the fellowship of the Nazi Party, the unity of the German people, and the greatness of their leader who, through composition, cutting, and special camera angles, was given mythical dimensions.

Triumph of the Will made a powerful appeal to the irrational, emotional side of the viewer, particularly in Germany at the time. Not surprisingly, the film was awarded the German Film Prize for 1935. But it was also given the International Grand Prix at the 1937 Paris World Exhibition, albeit over the protest of French workers.

Riefenstahl's next film, the short Tag der Freiheit: Unsere Wehrmacht ( Day of Freedom: Our Armed Forces, 1935) was in a way a sequel, shot to please the German Armed Forces, who were not at all pleased about having received little attention in Triumph of the Will.

Another major assignment from Hitler followed: to shoot the 1936 Olympic Games held in Germany. Olympia, Part 1: Fest der Völker ( Festival of Nations ) and Part 2: Fest der Schönheit ( Festival of Beauty ) premiered in 1938, again to great German and also international praise. Careful preparation, technical inventiveness, and eighteen months of editing helped Riefenstahl elevate sports photography—until then a matter for newsreels only—to a level of art rarely achieved. From the naked dancers in the opening sequence and the emphasis upon the African American athlete Jesse Owens (1913–1980) to the striking diving and steeplechase scenes, the film celebrated the beauty of the human form in motion through feats of strength and endurance.

Immediately after completing The Blue Light Riefenstahl had made plans to film Tiefland ( Lowlands ), a project interrupted by illness, Hitler's assignments, and World War II (1939–45). The film was finally finished in 1954. Many of Riefenstahl's other projects, most notably her plan to do a film on Penthisilea, the Amazon queen, were never completed at all. This was due partly to the fact that she was a woman in a man's profession but mostly to the war and the choices she made under the Nazis. Ultimately, all her work, in spite of the great talent and dedication it so clearly demonstrates, is tainted by the readiness and skill with which she put her art at the service of the Third Reich, whether it was from loyalty, political blindness, ambition, or, most likely, a combination of all three.

When Riefenstahl's film career came to a halt, her focus switched to still photography. She visited Africa many times in hopes of making a film, but eventually these trips resulted in two books of photography ( The Last of the Nubu, in 1974, and The People of Kau, in 1976). Once again her work was praised for its beauty and criticized for its political leanings. When she was seventy, Reinstahl learned to scuba dive and concentrated her photography on underwater coral life, resulting in a new book Coral Garden (1976).

In 1993, when Riefenstahl was ninety-one years old, German director Ray Mueller made a film biography, The Wonderful, Horrible Life of Leni Riefenstahl. It was released along with the English translation of her autobiography, Leni Riefenstahl: A Biography. In both the film and the book, Riefenstahl proclaimed her innocence and mistreatment, never having realized the effect her films had on promoting the Nazi cause.