Harun al-Rashid became the fifth caliph (religious and political leader of an Islamic state) of the Abbasid dynasty (ruling family) in September 786 at the age of twenty. During his reign the power and prosperity of the dynasty was at its height, though it has also been argued that its decline began at that time.

Harun al-Rashid was born at Reyy near Tehran, Iran, in 766. He was the third son of the third Abbasid caliph, Mohammed al-Mahdi and his wife Khayzuran, a former slave from Yemen. Harun was raised as a prince in the court at Baghdad, Iran. At the age of sixteen he was named second heir after his older brother, Musa al-Hadi.

Rashid's instructor and aide during his early youth was Yahya ibn Khalid the Barmakid (a powerful Persian family). Yahya continued to advise Rashid when he was named the leader of military expeditions against the Byzantines at age fourteen. The Byzantines were inhabitants of Byzantium, the seat of the Christian Empire. Rashid was rewarded for the success of these campaigns by being named governor of Ifriqiyah (Tunisia), Egypt, Syria, Armenia, and Azerbaijan Province in Iran. The honorific, or title, of al-Rashid (the Upright) was added to his name. 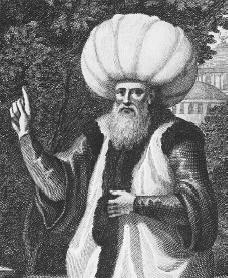 Rashid's father died in 785 and his brother al-Hadi assumed the throne. Al-Hadi, however, died mysteriously in September 786. His death was said to have been the result of a court conspiracy or plot. Rashid was proclaimed caliph. He at once appointed Yahya as his vizier, or primary minister.

Rashid, for the first seventeen years of his reign, relied to a great extent on his vizier and two of the vizier's sons, al-Fadl and Jafar. Yahya appears to have been an exceptionally good administrator. He is known for showing great wisdom in selecting and training his staff. His two sons had similar qualities. However, they fell from favor suddenly on the night of January 28, 803, when they were imprisoned and had their lands taken from them. The basic reason for this action was that the Barmakid family had become too powerful.

By this time Rashid was finding it difficult to hold his vast empire together. There was an almost constant series of local uprisings. An independent territory was established in Morocco by the Idrisid dynasty in 789. The following year, a semi-independent territory was established in Tunisia by the Aghlabid dynasty. These events marked a significant loss of power by Rashid's central government.

The danger of breaking up the government was further increased by Rashid's unwise arrangement for succession. One son, al-Amin, was to become caliph and another son, al-Mamun, was to have control of certain provinces and of a section of the army.

The seat of the Christian Empire was Byzantium (Constantinople). Rashid took a personal interest in the campaigns against the Byzantines. He led expeditions against them in 797, 803, and 806. In 797 the Byzantine empress Irene made peace and agreed to pay a large sum of money. Her successor, the emperor Nicephorus, later denounced this treaty. In 806 he was forced to make an even more humiliating treaty, which required paying annual tribute to Baghdad.

Though it is not mentioned in Arabic sources, there seem to have been diplomatic contacts between Rashid and Charlemagne (c. 742–814), the most famous European ruler of the Middle Ages. Rashid recognized Charlemagne as protector of Christian pilgrims to Jerusalem.

Rashid died at Tus in eastern Persia in 809, during an expedition to restore order there.

The view of history

The poet Alfred, Lord Tennyson, thinking of some of the stories of the Arabian Nights, spoke of "the good Haroun Alraschid." However, the scholar R. A. Nicholson thought he was an "irascible [irritable; readily angered] tyrant, whose fitful amiability [good-naturedness] and real taste for music and letters hardly entitle him to be described either as a great monarch or a good man."

Despite all its violence and cruelty and its readiness to have human beings executed and tortured, the court of Harun al-Rashid undoubtedly had something which later ages admire. It was far from being without a conscience, and in the quality of its living there were elements of grandeur and a nobility of style; and the tone of this life was set by Rashid and the Barmakids.

Clot, André. Harun al-Rashid and the World of the Thousand and One Nights. Edited by John Howe. New York: New Amsterdam, 1989.

I want to comment that added to this article should have descriptions of Harun al-Rashid and the accomplishments and advancements he made. Also telling about his early years/life is important to add to this article. Students may need it for projects on post classical rulers.