Sri Ramakrishna was an Indian mystic (one whose religious beliefs are based on spirituality and practices outside of traditional religion), reformer, and saint who, in his own lifetime, came to be hailed by people of all classes as a spiritual embodiment (taking on the physical form) of God.

Born in a rural Bengal village in India, Sri Ramakrishna was the fourth of five children. His parents were simple but traditional Brahmins (Hindu religion) deeply committed to the maintenance of traditional religious piety, or religious devotion. Legend has it that when Ramakrishna's father, Khudiram, made a pilgrimage (religious journey) to the holy place of Gaya, he had a vision of the Hindu god Vishnu, who told Khudiram he would be reincarnated (take the form) of his next son. Likewise, Ramakrishna's mother, Chandra Devi, had visions that her next born would be a divine (god-like) child. Shortly afterwards, Chandra Devi gave birth to Sri Ramakrishna.

As a child, Ramakrishna did not like routine schoolwork and never learned to read or write. Instead, he began to demonstrate spiritual qualities well beyond his years, which included experiencing intensely joyful experiences, long periods of thought, and spiritual absorption in the sacred (holy) and traditional Indian plays, especially with the roles of the gods Shiva and Krishna. During his formal initiation ceremony into the Brahmin caste (an Indian social class), he shocked his high-caste relatives by openly accepting a ritual meal cooked by a woman of low caste.

Though Ramakrishna resisted traditional priestly studies, at the age of sixteen he went to Calcutta, India, to assist his brother, who was serving as a priest for a number of local families. He was disturbed by the gross business practices and inhumanity of the city environment. However, when his brother was asked to become a priest at a large temple complex at Dakshineswar near the Ganges River outside Calcutta, Ramakrishna found a new and ultimately permanent environment for his spiritual growth and teaching.

That temple complex—one of the most impressive in the area—had been built by a wealthy widow of low caste whose spiritual ideal (standard) was the mother goddess Kali. This great deity (god) traditionally combines the terror of death and destruction with universal motherly security and is often represented in a statue of ferocious appearance. She represents an immense variety of religious and human emotions, from the most primitive to the highest forms, and therefore has a symbolic universality not easily contained within traditional religious forms.

Ramakrishna was selected to serve as priest in the Kali temple, and it was here that he had a series of important religious experiences in which he felt that Kali was calling him to a universal spiritual mission for India and all mankind. His untraditional and often bizarre behavior during this period of spiritual transformation was interpreted by many as a sign of madness. However, it clearly represented his struggles to free himself from routine religious patterns and to achieve a new and deeper spirituality. He imitated the actions of the god-monkey Hanuman (a sign of humility and service); he fed animals from the same food prepared for Kali (a disrespect to the traditionalists); he cleaned an outcaste's hovel (the shack 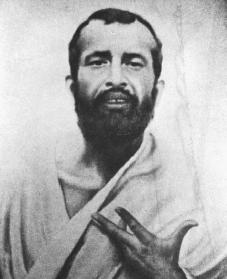 Sri Ramakrishna.
of a person expelled from his or her caste) with his hair, a terrible insult for a Brahmin; he sang and danced wildly when the spirit moved; and he rejected his Brahminical status, believing that caste superiority lowered the character of his spirituality. All of these acts symbolized his inward spiritual transformation.

When Ramakrishna was twenty-eight his emotional confusion eased, and he began to study a wide variety of traditional religious teachings. His teachers were impressed with his ability to learn, his amazing memory, and his remarkable talent for spiritual skill. He was openly hailed as a supreme sage, one who is regarded for his wisdom and experience. At the age of thirty-three he began to study Muslim tradition, and after a short period of instruction he had a vision of a "radiant figure"—interpreted as the founder of Islam Mohammed (c. 570–632) himself, which solidified his universal religious calling.

In 1868 Ramakrishna undertook an extensive pilgrimage; but despite the honors given to him he was saddened by the poverty (extremely poor conditions) of the masses and began living with outcaste groups to bring awareness to their situation, insisting that his rich patrons (supporters) make formal efforts to improve their condition. He was always a man of the people: simple, full of warmth, and without snobbishness or religious dogma (system of beliefs).

By now Ramakrishna had a wide following from all classes and groups. He was not merely a great teacher; he was regarded as a physical form of the sacred source of Indian religious tradition and of the universal ideals toward which all men strive. His spiritual energies and attractive personality were combined with a sharp sense of humor—often aimed at himself or his disciples (followers) when the hazards of pride and self-satisfaction seemed impossible to avoid.

During the last decade of his life, one of the most important events was the conversion of his disciple Vivekananda (1863–1902), who was destined to organize and promote Ramakrishna's teachings throughout India, Europe, and the United States. In 1886, when Ramakrishna was near death, he formally designated Vivekananda his spiritual heir, or one who takes over his teachings.

Ramakrishna's teachings do not appear in any clear form. He wrote nothing. His disciples recorded his words only in the context of the spiritual force of his personality, and therefore in collected form these sayings have the character of a gospel—a message of salvation centered in the spiritual teachings of his own life. He rejected all efforts to worship him personally; rather, he suggested that his presentation of man's spiritual potential serve as a guide and inspiration to others. Above all, Ramakrishna had a "grass-roots" appeal equaled by few others in any religious tradition, marked by his love of all men and his enthusiasm for all forms of spirituality.