For many years a leading authority on socially correct behavior, Emily Post provided solutions to social problems. With a name that became linked with proper manners in the minds of many, she was a successful author, newspaper columnist, and radio broadcaster.

Born into a wealthy family in Baltimore, Maryland, Emily Price's birth date is variously reported as October 3, 27, or 30, 1873. She was the only child of Bruce Price, an architect, and Josephine Lee Price. Growing up in an era of servants and chaperones (older people who accompany younger people 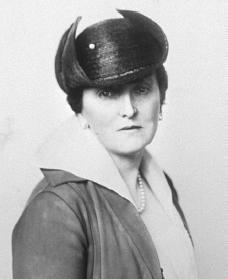 Emily Post.
Courtesy of the
Library of Congress
.
to social gatherings to make sure they behave), Emily was educated at home and attended a finishing school (a school that prepares girls for social life) in New York, New York, where her family had moved. She also traveled to Canada, France, and Italy with her father, often going with him to check on the progress of the buildings he had designed. She married Edwin Main Post, a banker, in 1892, and they had two sons.

Emily Post and her husband drifted apart, and his cheating caused the marriage to end in a divorce in 1905. She asked for no money from him since he had lost almost everything in a stock market crash. To add to her small income and support herself and her sons, Post began writing short stories that were published in the popular fiction magazines Ainslie's and Everybody's. She also produced wrote several novels. The first, The Flight of a Moth (1904), was about a young American widow attracted to a crooked Russian nobleman.

As a successful writer and a woman of social position, Post was encouraged by an editor at the Funk and Wagnalls publishing company to write a book on etiquette (proper social behavior). Etiquette—The Blue Book of Social Usage, first published in 1922, quickly became a best-seller, bringing her fame and fortune.

Post's guiding belief was that good manners began with consideration for the feelings of others and included good form in speech, knowledge of proper social graces, and charm. She believed that the best way to do almost anything was the way that pleased the greatest number of people and offended the fewest. Before her book had been out a month, readers bombarded her with questions the book had not addressed, and these formed the basis of later versions of the book.

Etiquette was originally written for the newly rich who wanted to live, entertain, and speak like the wealthy. The focus of later versions of the book, however, was the character of "Mrs. Three-In-One," a wonder woman who acted as cook, waitress, and charming hostess at small dinner parties. Post also started a column of questions and answers that appeared in 150 newspapers and received as many as twenty-six thousand letters a year at her New York office and more at newspapers in other cities. During the 1930s she appeared three times a week on her own radio program, which continued for eight years.

Although Post's advice on social behavior changed over the years, even in later versions of the book she refused to give up the idea of the chaperone. She also maintained an earlier belief that it was improper for a woman to visit a man alone in his apartment or to go on overnight automobile trips. Her "Blue Book," which was the American standard of etiquette for years, was reported to be second only to the Bible as the book most often stolen from libraries.

Emily Post maintained her social position, traveled in Europe, and always spent the summer months away from New York City at a home in Tuxedo Park, New York (designed and built by her father), and later in life at Edgartown, Martha's Vineyard, Massachusetts. She wrote other books besides her writings on etiquette, including: The Emily Post Cook Book (1951); The Personality of a House (1930), partly based on her experiences rebuilding and remodeling her summer home at Martha's Vineyard; and Children Are People (1940), much of which came from hours time she spent with her grandson. In 1946 she formed the Emily Post Institute, headed by her son Edwin, to study problems the issues of gracious living.

Emily Post remained active throughout her life, awakening early, but remaining in bed to devote time to letters and her daily column. She always made her first appearance of the day at lunch, which was served promptly at one o'clock. The expert on American etiquette, whose name became a household word, died in her New York apartment on September 25, 1960, at the age of eighty-six.