Luciano Pavarotti is possibly the most operatic tenor (the highest male singing voice) since Enrico Caruso (1873–1921). He is noted for combining accuracy of pitch and quality of sound production with a natural musicality.

Luciano Pavarotti was born on the outskirts of Modena in north-central Italy on October 12, 1935. He speaks fondly of his childhood, but the family had little money. Pavarotti, his parents, and his sister were crowded into a two-room apartment. His father was a baker, and his mother worked in a cigar factory. In 1943, because of World War II (1939–45; when France, Great Britain, the United States, and the Soviet Union fought against Germany, Japan, and Italy) the family had to leave the city. For the following year they rented a single room from a farmer in the neighboring countryside.

Pavarotti's earliest musical influences were his father's recordings featuring the popular tenors of the day. At around the age of nine he began singing with his father in a small local church choir. He took a few voice lessons at the time, but he has said they were not significant. After a normal childhood with an interest in sports, especially soccer, he graduated from the Schola Magistrale and faced the dilemma of choosing a career.

Pavarotti was interested in pursuing a career as a professional soccer player, but his mother convinced him to train as a teacher. He taught in an elementary school for two years, but his interest in music finally won out. Recognizing the risk involved, his father reluctantly gave his consent. He agreed that Pavarotti would be given free room and board until age thirty. After that time, if he had not succeeded as a singer, he would earn a living by any means that he could.

The beginning of his career

Pavarotti began serious study in 1954 at the age of nineteen with Arrigo Pola, a respected teacher and professional tenor in Modena. Pola knew of the family's money problems and offered to teach Pavarotti for free. At about this time Pavarotti met Adua Veroni, whom he married in 1961.

When Pola moved to Japan two and a half years later, Pavarotti became a student of Ettore Campogalliani, who was also teaching the now well-known soprano (the highest female singing voice), Pavarotti's childhood friend Mirella Freni (1935–). During his years of study Pavarotti held part-time jobs in 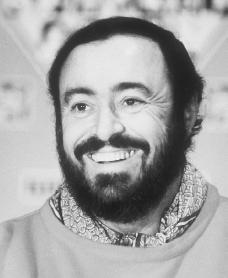 Luciano Pavarotti.
Reproduced by permission of
AP/Wide World Photos
.
order to help sustain himself—first as an elementary school teacher and then, when he failed at that, as an insurance salesman.

The first six years of study resulted in nothing more significant than a few recitals, all in small towns, and all without pay. When a nodule (a small lump) developed on Pavarotti's vocal chords causing a "disastrous" concert in Ferrara, Italy, he decided to give up singing. After this episode, Pavarotti's voice almost immediately improved. He feels this was due to a psychological release connected with this decision. Whatever the reason, the nodule not only disappeared but, as he related in his autobiography, "Everything I had learned came together with my natural voice to make the sound I had been struggling so hard to achieve."

Pavarotti won the Achille Peri Competition in 1961, for which the first prize was the role of Rodolfo in a production of Puccini's La Bohème to be given in Reggio Emilia on April 28 of that year. Although his debut was a success, a certain amount of maneuvering was necessary to secure his next few contracts. A well-known agent, Alesandro Ziliani, had been in the audience and, after hearing Pavarotti, offered to represent him. When La Bohème was to be produced in Lucca, Italy, Ziliani told the management that they could only have the services of a well-known singer they wanted if they took Pavarotti in a package deal.

Pavarotti's concert at Covent Garden, London, England, in the fall of 1963 also resulted from an indirect invitation. Giuseppe di Stefano had been scheduled for a series of performances, but the management was aware that he frequently canceled on short notice. They needed someone whose quality matched the rest of the production, yet who would learn the role without any assurance that he would get to sing it. Pavarotti agreed. When di Stefano canceled after one and a half performances, Pavarotti stepped in for the remainder of the series with great success.

Pavarotti's debut in 1965 at La Scala, in Milan, Italy, again as Rodolfo, came at the suggestion of Herbert von Karajan, who had been conducting La Bohème there for two years and had, as Pavarotti said, "run out of tenors." Pavarotti was somewhat resentful that the invitation did not come directly from the La Scala management. Also in 1965 Pavarotti made his American debut in Miami, Florida, as Edgardo in Donizetti's Lucia di Lammermoor. Illness troubled him during his New York City debut at the Metropolitan Opera in November 1968 and compelled him to cancel after the second act of the second performance.

Nineteenth-century Italian opera comprises most of Pavarotti's repertoire (group of songs that one can sing), particularly Puccini, Verdi, and Donizetti, whose music he found the most comfortable to sing. He sings few recitals, because he regards them as more strenuous than opera.

Very few opera singers are convincing actors and Pavarotti is not among them. However, by the mid-1980s he spent nearly as much time on practicing his acting as on his singing. In 1972 he starred in a commercial film, Yes, Giorgio. His solo album of Neapolitan songs, "O Sole Mio," outsold any other record by a classical singer.

Throughout the 1980s Pavarotti strengthened his status as one of the opera world's leading figures. Televised performances of Pavarotti in many of his greatest and favorite roles helped him broaden his appeal. He was able to reach millions of viewers each time one of his opera performances or solo concerts was seen. He also began to show increasing flexibility as a recording artist. He recorded classical operas and Italian folk songs. He also recorded contemporary popular songs with composer and conductor Henry Mancini (1924–1994). He became the world's third-highest top-selling musician, right behind Madonna (1958–) and Elton John (1947–).

By the time Pavarotti proposed and staged the first "Three Tenors" concert in Rome, he was unabashedly (boldly, without disguise) thrilled with his immense popularity. "I want to be famous everywhere," he told Newsweek.

Pavarotti received his share of criticism and rejection as well. He was barred from contracts with the Lyric Opera of Chicago in 1989 because he canceled many performances due to bad health. He was sued by the British Broadcasting Company (BBC) in 1992 for selling the network a lip-synched (pre-tending to sing to a pre-recorded track) concert. He was booed at La Scala during a performance of Don Carlo. He finally canceled tours and took several months off to rest.

Pavarotti returned to the stage in 1993 with a concert before five hundred thousand people in Central Park, in New York City. Critics accused him of blatant commercialism (overly concerned with making money), but the crowds loved the performances. In 1997 the three tenors—Placido Domingo (1941–), Jose Carreras (1947–) and Pavarotti—toured to mixed reviews, but delighted audiences who seemed unwilling to let Pavarotti even think of retiring.

In 2000 prosecutors in Bologna, Italy, tried Pavarotti on tax fraud charges. They claimed that although Pavarotti lived in Monte Carlo he still had many property holdings in Italy. Pavarotti was accused of owing almost $5 million and could have spent as much as a year and a half in prison. In the end, he was acquitted (had charges dismissed).

In 2002 Pavarotti continued to drop hints that he would be retiring soon, but had not given any specific date. Through his talent and his desire to reach out to audiences everywhere, Pavarotti has been an important figure in bringing the world of opera to a great variety of people.