Jessye Norman was born on September 15, 1945, in Augusta, Georgia. Her father, Silas, was an insurance broker and her mother, Janie, was a schoolteacher. There were four other children in the family. Music was very important in the family, and all the children took piano lessons at a young age. Her parents encouraged Jessye musically, and she began singing in church choirs at the age of four.

Norman's first step toward a singing career, taken at the suggestion of her high school chorus teacher, was to enter the Marion Anderson vocal competition in Philadelphia, Pennsylvania, at age sixteen. She did not win the competition, but her singing did gain her a full scholarship to Howard University in Washington, D.C. Norman fell in love with opera the first time she heard a Metropolitan Opera radio broadcast. "I was nine and didn't know what was going on, but I just loved it," she told Charles Michner of Vanity Fair magazine.

Norman, to finance her graduate studies, entered the 1968 International Music Competition of the German Broadcasting Corporation in Munich, Germany, and took first prize. This famous award gave her immediate wide recognition and engagements throughout Germany leading to a December 1969 debut with the Deutsche Oper in Berlin, Germany. Norman had always been selective about her repertoire (a list of operas prepared for performance). She followed her own instincts and interests more than the advice of her teachers or requests of her management. This tendency put her at odds with the Deutsche Oper and forced her to seek out musical works on her own that she felt were more suitable to her vocal skills.

Norman's search took her to Italy, where she sang in Florence in the spring of 1970. In April of 1972 she made her debut at Milan's famous opera house, La Scala, in the title role of Verdi's Aida. Her first well-publicized American performance took place that summer in a concert performance of the same role at the Hollywood Bowl. Later in 1972 Norman further established herself in the United States with an all-Wagner concert at the Tanglewood Festival in Lennox, Massachusetts, and a recital tour of the country. That September she made her London, England, debut at the Royal Opera House, Covent Garden.

During the years from 1973 to 1975 Norman performed throughout the Western world—in Spain, Holland, Germany, Scotland, Italy, England, France, and Argentina, as well as the United States—and often performed works outside the standard repertoire.

In 1975 Norman moved to London and had no staged opera appearances for the next five years. While her reason for the withdrawal was that she needed to fully develop her voice, others felt that this was a period of concern for her weight and thus her stage image. She told John Gruen of the New York Times, "As for my voice, it cannot be categorized. I like so many different kinds of music that I've never allowed myself the limitations of one particular range."

In October of 1980 Norman returned to the operatic stage in the title role of Richard Strauss's (1864–1949) Ariadne auf Naxos at the Hamburger Staatsoper in Hamburg, Germany. In 1982 she appeared in her American stage debut with the Philadelphia Opera as Dido in Henry Purcell's (1659–1695) Dido and Aeneas and as Jocasta in Igor Stravinsky's (1882–1971) Oedipus Rex. Her debut at New York's Metropolitan Opera took place in September of 1983. She sang at the January 21, 1985, inauguration of President Ronald Reagan (1911–), an invitation that she debated as an African American, as a Democrat, and as a nuclear disarmament activist. But she did accept and sang the folk song "Simple Gifts."

Although Norman was concerned about her stage image, she often managed to convert 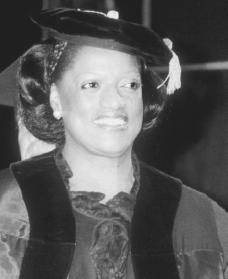 Jessye Norman.
Reproduced by permission of
AP/Wide World Photos
.
her large size to a positive advantage by choosing roles that called for stately and dignified bearing.

Among the numerous honors bestowed upon Norman were: Musical America 's musician of the year, 1982; honorary doctorates from Howard University (1982), Boston Conservatory of Music (1984), University of the South (1984), and Harvard University (1998). She was given the honor of being named Commandeur de l'Ordre des Arts et des Lettres from the French government, 1984. She also received awards for many of her recordings.

Norman's work in the 1990s included singing at the opening of the Metropolitan Opera's production of Ariadne auf Naxos in 1993, taking part at a gala for the New York Philharmonic in 1995, and appearing at concerts throughout the world.

In March 1997, Jessye Norman was honored by New York City's Associated Black Charities at the eleventh annual Black History Makers Awards Dinner for her contributions to the arts and to African American culture. Norman made her first appearance in Russia in 2001. She sang at the "Tribute in Light" memorial ceremony in New York City to honor those people who died in the destruction of the World Trade Center on September 11, 2001.

International Encyclopedia of Music and Musicians. 1975.