The Old Testament prophet Moses was chosen to lead Israel out of Egyptian slavery. He created Israel's nationhood and delivered the Ten Commandments.

Moses was the son of Amram and Yochebed of the tribe of Levi. Miriam and Aaron were his brother and sister. He was born in Egypt during the period in which the Israelites (Hebrews) had become a threat to the Egyptians simply because of their large population. The Pharaoh had ordered that all newborn male Hebrew children be cast into the Nile to drown. Amram and Yochebed took their newborn son and placed him in a waterproof basket and hid him in the tall grasses of the Nile. Meanwhile, his sister Miriam hid and watched over the baby from a distance. A group of women and servants were bathing nearby. The Pharaoh's daughter, hearing the baby cry, found and rescued him. She named him "Moses," meaning "drawn from the water." Her desire for a son fulfilled, she made certain that he had the best of everything, including education.

Moses was brought up in the splendor of the Egyptian court as the Pharaoh's daughter's adopted son. Grown to manhood, he was aware of his Hebraic roots and shared a deep compassion for his confined kinsmen. He became furious while witnessing an Egyptian master brutally beating a Hebrew slave, and he impulsively killed the Egyptian. Fearing the Pharaoh's punishment, he fled into the desert of Midian, becoming a shepherd for Jethro, a Midianite priest whose daughter Zipporah he later married. While tending the flocks on Horeb Mountain in the wilderness, he saw a bush burning yet not turning to ash. He heard a voice from within the bush telling him that he had been chosen to serve as one to lead the children of Israel out of Egypt. He was also told to declare the unity of God to his people. At that time most Israelites were worshipping many gods. Moses was to tell them that there was only one God.

The tremendous responsibility of Moses's task, his shyness, and his own feeling of unworthiness brought forth a hesitancy and lack of confidence. The Divine answer was "Who made your tongue?" He was then assured that Aaron, his more talkative brother, would serve as his spokesman both to the children of Israel and to the Pharaoh. The promised destination for the Israelites' journey was a "land rich with milk and honey." 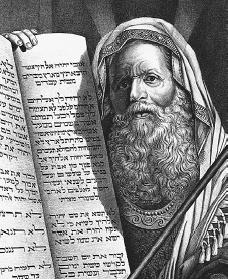 Moses.
Reproduced by permission of the
Corbis Corporation
.

Moses returned to Egypt and persuaded the Hebrews to organize for a quick trip from their Egyptian slave drivers. With Aaron, Moses informed the Pharaoh that the God of the Hebrews demanded that Pharaoh free God's people. The Pharaoh refused to obey, bringing upon himself and his people nine terrible plagues (diseases that spread rapidly and can cause death) that Moses produced upon Egypt by using the miraculous staff he had received from God as a sign of his authority. The Egyptians suffered under the plagues of water turned into blood, frogs, gnats, flies, disease to their cattle, boils, hail, locusts, and darkness. Each plague was severe to the Egyptians but left the Israelites untouched. The tenth plague is now the Hebrew story of Passover. God sent the Angel of Death to kill the firstborn sons of the Egyptians—a proof of His immense strength and power. The Israelites protected their households by putting lamb's blood on their doorway, so that the Angel of Death would know to pass over their homes. This last plague broke the Pharaoh's resistance and moved him to grant the Hebrews permission to leave immediately. Moses thus found himself the leader of an undisciplined collection of slaves, Hebrew as well as non-Hebrew, escaping from Egyptian territory toward freedom.

Moses' immediate goal was Mt. Horeb, called Mt. Sinai, where God had first revealed Himself to Moses. The Hebrews came to the sacred mountain encouraged by the power they sensed in Moses. Summoned by God, Moses ascended the mountain and received the tablets of stone while the children of Israel heard the thundering forth of the Ten Commandments. Inspired, the people agreed to the conditions of the Covenant (agreement made between people and God).

Through forty years in the wilderness of Sinai, overcoming many obstacles, Moses led the horde of former slaves, shaping them into a nation. Many miracles happened along the way. When the Israelites stopped in front of the Red Sea with the Egyptian soldiers at their heels, it was Moses' raised staff that parted the Red Sea so that they could cross. Once they had safely crossed, the sea crashed down, drowning many of their pursuers. When food supplies ran out, God sent down what was called "manna" (spiritual food) everyday for the nourishment of the Israelites. Moses had to hear the Israelites complain about the food, the climate, and the slowness of their progress. Moses even had to hear the Israelites claim that Egypt had been better than this wilderness trip. When the people were in need of water, God told Moses to speak to a rock and water would spring from it. Moses' character was apparently worn down because, instead of following directions, he struck the rock with his staff. That was to have lasting impact on Moses's final days.

With the help of his brother Aaron, Moses was able to hold together his ragtag band of exslaves for forty years. Only a man with tremendous will, patience, compassion, humility, and great faith could have forged the bickering and scheming groups who constantly challenged his wisdom and authority into a nation. Throughout the forty years Moses was in constant communication with his Lord, the God of Israel. This God added to the Ten Commandments through Moses by giving a code of law regulating the social and religious lives of the people. This collection of instructions, read to and confirmed by the people, was called the Book of the Covenant. These were protected in a specially designed box called the Ark of the Covenant. All of the specific details were spoken through Moses by the God of the Israelites.

Under Moses's leadership, most of the land east of the Jordan was conquered and given to the tribes of Reuben and Gad and to half of the tribe of Menashe. Moses, however, was not permitted to lead the children of Israel into Canaan, the Promised Land, because he had been disobedient to God during the period of wandering in the desert. His regular meetings with God had fulfilled him in ways that even his fellow Israelites could detect. His face was always radiant when he exited any interview with his Almighty. Moses, 120 years old, died in the land of Moab and was buried opposite Bet Peor.

Awesome article! I am doing Moses for a book report...and this site helped a lot!
2
Jordan

God instructed Moses and Aaron to gather the people together and speak to a certain rock. When they did this, God would cause water to come out of the rock. Instead of doing what God said for Moses to do, he lifted up his hand, and with his rod he smote the rock twice: and the water came out abundantly, and the congregation drank, and their beasts [also]. Numbers 20:1-8. The Lord was angry with Moses, so did he lose his soul also or was he forgiven of his sin? Deut.1:37; 4:21
4
Jone

I haven't found any scriptures that said Moses repented of his sin but he continued to server God. He was a prophet and a servant of God, he led the children of Israel in the wilderness. In the book of Hebrews the writer said that Moses and all his house was faithful.(Heb.3:2); (Rev. 15:3). Then Moses was faithful!

Moses said in Deut. 1:36-38 that Jehovah was angry with him for Israels sake and he didn't get to go into the promise land. Caleb the son of Jephunneh and Joshua the son of Nun got to enter into the promise land and Joshua would cause Israel to inherit the Land. We can read that John prepared a people for Jesus and a Remnant was saved. God gave his people every opportunity to obey him, but they rebelled against His commandments. In Deut.9:16-24; 25-29, Mose said that he prayed for Israel and for Aaron because God was Angry with them and would have destroy them.
5
Anne

thank you that information. i have learned allot from it.
anne
6
Pastor Amakor

Awesome article. Contributions and comments demanding further studies. Thanks to you all.
7
Isaac

Why didn't Moses make it to promised Land?
Is God purposely allowed it such way or Moses failed to asked for forgiveness of his disobedience act he committed unto God?
Thanks.