Lead singer for the rock group the Doors, Jim Morrison was the poster-boy for the mind-bending, outlandish lifestyle of the 1960s in his brief but brilliant career.

James Douglas Morrison was born in Melbourne, Florida, on December 8, 1943. His father, a career Navy officer, was transferred from base to base during his son's childhood, but, by his Jim's early teens, the family had settled in Alexandria, Virginia. After finishing high school in Alexandria, Morrison took several classes at St. Petersburg Junior College and Florida State University before pulling up roots in 1964 and heading for the West Coast. By 1966 the twenty-two-year-old Morrison was enrolled in film classes at the University of California at Los Angeles (UCLA), but a friendship with fellow student Ray Manzarek would sideline any plans he had of becoming a filmmaker.

While the two young men had known each other only casually as fellow students, they ran into each other one day by accident, on a Venice, California, beach. Manzarek, an organist, along with Morrison, guitarist Robbie Krieger, and drummer John Densmore, decided to form their own rock band to put their songs to music. The young men decided to call their group the Doors, a name inspired by a quote from nineteenth-century English poet William Blake (1757–1827): "If the doors of perception were cleansed every thing would appear as it is, infinite." As Morrison was fond of saying, "there are things known and things unknown and in between are the Doors."

A long-term gig at the Whiskey-a-Go-Go on Hollywood's Sunset Strip allowed the Doors to develop their stage presence, and it eventually drew the attention of talent scouts searching for new recording acts. Not the least of the group's attractions was Morrison, who sang in a husky baritone, wore skintight pants, and went even further than Elvis Presley had in incorporating sexually suggestive movements into his onstage performances. With lyrics like "Come on baby, light my fire," Morrison drove young women wild.

The rise (and fall) of the Lizard King

After the release of their first album, The Doors, the group went back into the studio and cut Strange Days, both of which came out in 1967. Other albums would include Waiting for the Sun (1968), The Soft Parade (1969), Morrison Hotel (1970), Absolutely Live (1970), and L.A. Woman (1971). Morrison, interested in Native American lore and the images of the American deserts, dubbed himself the "Lizard King" and wrote several songs, including "Celebration of the Lizard," in reference to his reptilian alter ego (another aspect of one's personality).

Caught up in a wave of popularity, the young band found itself carried into a new world, where drugs, alcohol, and sex played a major role. Morrison, whose status as a celebrity had begun almost overnight, found it difficult to handle the change: his growing dependence on alcohol would dim his talent in the years that followed, and the superstar status made him believe he was immune to normal authority.

On March 1, 1969, Morrison and the Doors were booked for a concert at Dinner Key Auditorium, in Coconut Grove, in Morrison's home state of Florida. During his performance before thirteen thousand screaming fans, Morrison exposed himself briefly to the audience. Nothing was done until pressure from disgusted Miami-area residents forced local police to issue a warrant for Morrison's arrest. The singer, who had been vacationing out of the country, turned himself in to the Federal Bureau of Investigation (FBI) and returned to Miami, where he went on trial on August 12, 1970. Found guilty of a misdemeanor (a minor crime) for profanity (vulgar language or behavior) and drunkenness, he 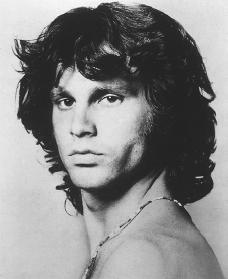 Jim Morrison.
Reproduced by permission of
Archive Photos, Inc.
was sentenced to six months hard labor, although the sentence was stayed (postponed) while his attorney appealed the conviction. Morrison would not live to see the outcome of that appeal.

After the trial in Miami, Morrison's life grew more chaotic, his relationships with band members more strained. Searching to recover a sense of himself, he went back to the poetry that he had loved while a college student. In 1970 he published his first book of verse, The Lords [and] The New Creatures, which had been privately printed the year before.

On July 3, 1971, Morrison's girlfriend found him dead in his bathtub. The cause of death was determined to be a heart attack, although an autopsy was never performed. He was buried at the Pere-Lachaisse Cemetery in Paris, France. His death was kept secret until after the funeral to eliminate the crowds of saddened fans that would likely have attended. Morrison's grave remains one of the most visited sites in all of Paris.

Densmore, John. Riders on the Storm: My Life with Jim Morrison and the Doors. New York: Delacorte Press, 1990.

Riordan, James, and Jerry Prochickey. Break on Through: The Life and Death of Jim Morrison. New York: Morrow, 1991.