Thelonious Monk was an important member of the jazz revolution that took place in the early 1940s. Monk's unique piano style and his talent as a composer made him a leader in the development of modern jazz.

Teaches self to read music

Thelonious Sphere Monk was born on October 10, 1917, in Rocky Mount, North Carolina. The first musical sounds he heard were from a player piano that his family owned. At the age of five or six he began picking out melodies on the piano and taught himself to read music by looking over his sister's shoulder as she took lessons. About a year later the family moved to the San Juan Hill section of New York City, near the Hudson River. His father became ill soon afterward and returned to the South, leaving Thelonious's mother, Barbara, to raise him and his brother and sister. Though the family budget was tight, she managed to buy a baby grand Steinway piano, and when Thelonious turned eleven she began paying for his weekly piano lessons. Even at that young age it was clear that the instrument was part of his destiny.

As a boy Monk received training in the gospel music style, accompanying the Baptist choir in which his mother sang, and playing piano and organ during church services. At the same time he was becoming initiated into the world of jazz; near his home were several jazz clubs as well as the home of the great Harlem stride pianist James P. Johnson, from whom Monk picked up a great deal. By the age of thirteen he was playing in a local bar and grill with a trio. At the Apollo Theater's famous weekly amateur music contests, Monk won so many times that he was eventually banned from the event.

In 1939 Monk put his first group together. His first important gig came in the early 1940s when he was hired as house pianist at a club called Minton's. It was a time of dramatic innovation in jazz, when a faster, more complex style was developing. The musicians for this new music, called bebop, created it virtually on the spot. Yet while Monk was important in inspiring bebop, his own music had few ties to any particular movement. Monk was Monk—an original—and the proof was in his compositions.

As the 1940s progressed and bebop became more and more the rage, Monk's career declined. In 1951 he was arrested with 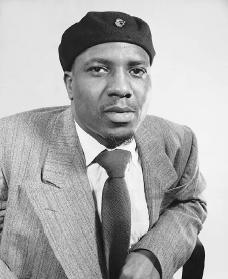 Thelonious Monk.
Reproduced by permission of
AP/Wide World Photos
.
pianist Bud Powell on an extremely questionable charge of narcotics (illegal drugs) possession. Not only was he confined for sixty days in prison, but the New York State Liquor Authority removed his cabaret card, without which he could not get hired for local club dates. For the next several years he survived only with the help of his good friend and patron the Baroness de Koenigswarter.

The strange behavior that Monk displayed in public sometimes got him into trouble. In 1958 he was arrested, undeservedly, for disturbing the peace, and his cabaret license was revoked a second time. Forced to take out-of-town gigs, he was separated from his two main sources of stability—New York City and his wife Nellie. His odd behavior intensified as a result. During one episode in 1959 in Boston, Massachusetts, state police picked him up and brought him to the Grafton State Hospital, where he was held for a week.

Toward the end of the 1950s Monk began to receive the prestige he had for so long deserved. His late 1950s recordings on the Riverside label had done so well that in 1962 he was offered a contract from Columbia. As a performer he was equally successful, commanding, in 1960, two thousand dollars for week-long engagements with his band and one thousand dollars for single performances. His December 1963 concert at New York's Philharmonic Hall, a big-band presentation of originals, was for him a personal landmark.

In the early 1970s Monk made a few solo and trio recordings for Black Lion in London and played a few concerts. Beginning in the mid-1970s he isolated himself from his friends and colleagues, spending his final years at the home of the Baroness Nica de Koenigswarter in Weehawken, New Jersey. After playing a concert at Carnegie Hall in March 1976, Monk was too weak physically to make further appearances. He died on February 17, 1982, in Englewood Hospital, after suffering a massive stroke. Along with Miles Davis (1926–1991) and John Coltrane (1926–1967), Monk is remembered as one of the most influential figures in modern jazz. The music Monk left behind remains as some of the most innovative and unique material in all of music, jazz or otherwise.