The French painter Claude Monet was the leading figure in the growth of impressionism, a movement in which painters looked to nature for inspiration and used vibrant light and color rather than the solemn browns and blacks of previous paintings.

Claude Monet was born in Paris, France, on November 14, 1840. His father, Adolphe Monet, was a grocer. In 1845 the family moved to Le Havre, France, where Monet's father and uncle ran a business selling supplies for ships. By the time he was fifteen Monet had become popular as a caricaturist (one who makes exaggerated portraits of people). Through an exhibition of his drawings at a local frame shop in 1858, Monet met Eugène Boudin, a landscape painter who became a great influence on the young artist. Boudin introduced Monet to outdoor painting, an activity that soon became his life's work.

By 1859 Monet was determined to pursue an artistic career. He worked at the free Académie Suisse in Paris, and he frequented the Brasserie des Martyrs, a gathering place for Gustave Courbet (1819–1877) and other French painters of the 1850s. 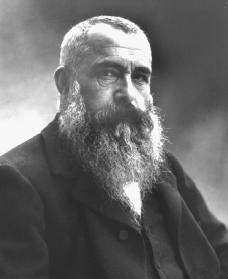 Claude Monet.
Reproduced by permission of the
Corbis Corporation
.
Fontainebleau, France, with other artists including Théodore Rousseau (1812–1867) and Jean François Millet (1814–1875). At the outbreak of the Franco-Prussian War in 1870, Monet traveled to London, England, where he met the art dealer Paul Durand-Ruel. The following year Monet and his wife, Camille, whom he had married in 1870, settled at Argenteuil, France, which became his home for the next six years.

Monet's constant movements during this period were directly related to his artistic ambitions. He was interested in natural light, atmosphere, and color, and he tried to record them in his paintings as accurately as possible. A striking example of his early style is the Terrace at the Seaside, Sainte-Adresse (1866), which contains a shining mixture of bright, natural colors. Throughout the 1860s and 1870s, he was often short of money and destroyed his own paintings rather than have them taken away by creditors (those to whom money is owed).

As William Seitz wrote, "The landscapes Monet painted at Argenteuil between 1872 and 1877 are his best-known, most popular works, and it was during these years that impressionism most closely approached a group style." Monet exhibited regularly in the impressionist group shows, the first of which took place in 1874. On that occasion his painting Impression: Sunrise (1872) inspired a newspaper critic to call all the artists "impressionists," and the name stuck. Monet and the impressionists discovered that even the darkest shadows and the gloomiest days contain a wide variety of colors. However, Monet learned that he had to paint quickly and to use short brushstrokes loaded with individual colors.

During the 1880s the impressionists began to drift apart, although individual members continued to see one another and occasionally work together. Monet gradually gained critical and financial (relating to money) success during the late 1880s and the 1890s. This was due mainly to the efforts of Durand-Ruel, who sponsored one-man exhibitions of Monet's work as early as 1883 and who, in 1886, also organized the first large-scale impressionist group show to take place in the United States.

Monet's wife died in 1879; in 1892 he married Alice Hoschedé. During the 1890s he devoted his energy to paintings of haystacks (1891) and the facade (front) of Rouen Cathedral (1892–94). In these works Monet painted his subjects from the same physical position, allowing only the light and weather conditions to vary from picture to picture. By 1899 he began work on his famous paintings of the many water lilies in his gardens at Giverny, France. Monet's late years were very difficult. His health declined rapidly, and by the 1920s he was almost blind.

In addition to Monet's physical ailments, he struggled with the problems of his art. In 1920 he began work on twelve large canvases (each fourteen feet wide) of water lilies, which he planned to give to the state. To complete them, he fought against his own failing eyesight and the fact that he had no experience in creating large-scale mural art. In effect, the task required him to learn a new kind of painting at the age of eighty. The paintings are characterized by a broad, sweeping style and depend almost entirely on color. Monet worked on the water lily paintings until his death on December 5, 1926.

The French painter Claude Monet was the leading figure in the growth of impressionism, a movement in which painters looked to nature for inspiration and used

I LOVE Monet's work! I an retired now but I worked as a Fine Art tutor (NorthWest Region, UK). 30 years ago I did a version, a "Haystacks" type. A colleague would NOT relent until I sold it to her. I don't know where she, or it, is now.