M arie Antoinette was the queen of France at the outbreak of the French Revolution (1787–99). Her extravagant lifestyle, which included lavish parties and expensive clothes and jewelry, made her unpopular with most French citizens. When the king was overthrown, Marie Antoinette was put in jail and eventually beheaded.

The personalities of the two rulers were very different. Louis XVI was withdrawn and emotionless. Marie Antoinette was happy and careless in her actions and choice of friends. At first the new queen was well liked by the French citizens. She organized elegant dances and gave many gifts and favors to her friends. However, people began to resent her increasingly extravagant ways. She soon became unpopular in the court and the country, annoying many of the nobles, including the King's brothers. She also bothered French aristocrats, or nobles, who were upset over a recent alliance with Austria. Austria was long viewed as France's enemy. Among the general French population she became the symbol for the extravagance of the royal family.

Marie Antoinette did not disrupt foreign affairs as frequently as has been claimed. When she first entered France she interrupted an official German greeting with, "Speak French, Monsieur. From now on I hear no language other than French." She sometimes tried, usually without great success, to obtain French support for her homeland.

The queen's influence on domestic policy before 1789 has also been exaggerated. Her interference in politics was usually in order to obtain jobs and money for her friends. It is true, however, that she usually opposed the efforts of reforming ministers such as A. R. J. Turgot (1727–1781) and became involved in court scandals against them. Activities such as the "diamond necklace affair," where the queen was accused of having an improper relationship with a wealthy church official in exchange for an expensive necklace, increased her unpopularity and led to a stream of pamphlets and articles against her. The fact that after the birth of her children Marie Antoinette's way of life became more restrained did not alter the popular image of an immoral and extravagant woman.

The last days of the monarchy

In the summer of 1788 France was having an economic crisis. Louis XVI yielded to pressure and assembled the Estates General, which was a governmental body that represented France's three Estates—the nobles, the church, and the French common people. Marie Antoinette agreed to the return of Jacques Necker (1732–1804) as chief minister and to granting the Third Estate, which represented the commoners, as many representatives as the other two Estates combined. However, after such events as the taking of the Bastille on July 14, 1789 (French citizens overran a Paris prison and took the weapons stored there), Marie Antoinette supported the conservative court faction that insisted on keeping the royal family in power.

On October 1, 1789, the queen attended a banquet at Versailles, France, during which the French Revolution was attacked and insulted. A 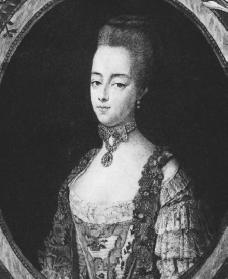 Marie Antoinette.
Courtesy of the
Library of Congress
.
few days later (October 4–5) a Parisian crowd forced the royal court to move to Paris, where they could control it more easily. Marie Antoinette's role in the efforts of the monarchy to work with such moderates as the Comte de Mirabeau (1749–1791) and later with the constitutional monarchist A. P. Barnave (1761–1793) is unclear. But it appears that she lacked confidence in them. On June 21, 1791, the king and queen were captured at Varennes (a border town in France) after trying to escape. Convinced that only foreign assistance could save the monarchy, the queen sought the aid of her brother, the Holy Roman emperor Leopold II (1747–1792). At this time, many French military officers left the country. Thinking that France would be easily defeated, she favored a declaration of war against Austria in April 1792. On August 10, 1792, a Paris crowd stormed the Tuileries Palace and ended the monarchy.

The queen is dead

On August 13, 1792, Marie Antoinette began a captivity that was to end only with her death. She was jailed in various Parisian prisons. After a number of unsuccessful attempts to escape, Marie Antoinette appeared before the Revolutionary Tribunal. She was charged with aiding the enemy and inciting civil war within France. The tribunal found her guilty and condemned her to death. On October 16, 1793, she went to the guillotine. (The guillotine was a machine used during the French Revolution to execute people by beheading them.) Marie Antoinette aroused sympathy by her dignity and courage in prison and before the executioner.

Thomas, Chantal. The Wicked Queen: The Origins of the Myth of Marie-Antoinette. New York: Zone Books, 1999.

What were Marie Antoinettes childrens names, how long did they live and
how did they live their lives after the death of their Mother and Father?
2
Kelly

This was very informative. It makes it easier to understand when it's organized into different subtitles like this is.
3
Catherine

When did Marie Antoinette say, "Let them eat cake?" I know she said this when the poor people (98%) of the French people were protesting the economic crisis--they had no bread. Was this said when the women marched because they thought that the Queen was hoarding grain?
4
Kirsten

Catherine - She never said that. She had TONS of rumors flying around so you could never believe anything they said. Plus it was never proven true.

I would also like to know about her children & their lives. And of course their children, grandchildren, etc. Thank you.
6
laura

None of her kids survived. They were captured and killed too. One of her little boys had tubercolosis and died in jail. Marie Antoinette never said "let them eat cake", that was just a rumor that someone made and nobody wasted time to public the lie.
7
Agatha

"let them eat cake"? Who the fudge made that up? that is freaking weird. Some of here kids did survive but the others didn't. One of her sons died in jail of tuberculosis. But yea she never did say "let them eat cake" but if she did then it was probably because of the poor people where protesting the crisis of them not having enough bread, but i don't think that she said "let them eat cake". But anyways here are the children's name if u need them:
(1.) Marie Therese, the Duchess of Angouleme
(2.) Louis Joseph, the Dauphin of France
(3.) Louis XVII
(4.) Princess Sophie
The last two children died. :(
8
Kathy

Did she have any conections with Edinburgh or Scotland
9
Jacob