The works of the French painter Édouard Manet influenced many other artists; their modern subject matter and more natural, less precise style were seen as revolutionary.

Édouard Manet was born in Paris, France, on January 23, 1832, to Auguste Édouard Manet and Eugénie Désirée Manet. Manet's mother was an artistic woman who made sure that Édouard and his two brothers took piano lessons. His father, an official at the Ministry of Justice, expected his son to study law and was opposed to the idea of him becoming a painter. It was decided that Édouard would join the navy, and at the age of sixteen he sailed to Rio de Janeiro, Brazil, on a training vessel. Upon his return he failed to pass the navy's entrance examination. His father finally gave in, and in 1850 Manet began studying figure painting in the studio of Thomas Couture, where he remained until 1856. Manet also traveled abroad and made many copies of classic paintings for both foreign and French public collections.

Manet's entry for the Salon (annual public exhibition, or show) of 1859, the Absinthe Drinker, a romantic but daring work, was rejected. At the Salon of 1861, his Spanish Singer, one of a number of works of Spanish character painted in this period, not only was admitted to the Salon but won an honorable mention and the praise of the poet Théophile Gautier. This was to be Manet's last success for many years. 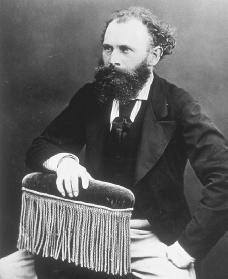 Édouard Manet.
Reproduced by permission of the
Corbis Corporation
.

In 1863 Manet married Suzanne Leenhoff, his piano teacher. That year he showed fourteen paintings at the Martinet Gallery; one of them, Music in the Tuileries, caused a hostile reaction. Also in 1863 the Salon rejected Manet's large painting Luncheon on the Grass; its combination of clothed men and a nude woman was considered offensive. Manet elected to have it shown at the now famous Salon des Refusés, created by the Emperor to quiet complaints from the large number of painters whose work had been turned away by the official Salon. In 1865 Manet's Olympia produced an even more violent reaction at the official Salon, and his reputation as a rebel became widespread.

In 1866, after the Salon jury had rejected two of Manet's works, novelist Émile Zola (1840–1902) came to his defense with a series of articles filled with strongly expressed praise. In 1867 Zola published a book that predicted, "Manet's place is destined to be in the Louvre." (The Louvre, in Paris, is the largest and most famous art museum in the world.) In May 1868 Manet, at his own expense, exhibited fifty of his works at the Paris World's Fair; he felt that his paintings had to be seen together in order to be fully understood.

Although the painters of the impressionist movement (a French art movement of the second half of the nineteenth century whose members sought in their works to represent the first impression of an object upon the viewer) were influenced by Manet during the 1860s, later it appeared that he had also learned from them. His colors became lighter, and his strokes became shorter and quicker. Still, Manet remained mainly a figure and studio painter and refused to show his works with the impressionists at their private exhibitions.

Toward the end of the 1870s Manet returned to the figures of the early years. Perhaps his greatest work was his last major one, A Bar at the Folies-Bergère. In 1881 Manet was admitted to membership in the Legion of Honor, an award he had long dreamed of. By then he was seriously ill, and walking became increasingly difficult for him. In his weakened condition he found it easier to handle pastels than oils, and he produced a great many flower pieces and portraits (paintings of people, especially their faces) in that medium. In early 1883 his left leg was amputated (cut off), but this did not prolong his life. He died peacefully in Paris on April 30, 1883.

Manet was short, unusually handsome, and witty. He was remembered as kind and generous toward his friends. Still, many elements of his personality were in conflict. Although he was a revolutionary artist, he craved official honors; while he dressed fashionably, he spoke a type of slang that was at odds with his appearance and manners; and although his style of life was that of a member of the conservative (preferring to maintain traditions and resist change) classes, his political beliefs were liberal (open-minded and preferring change).