Roy Lichtenstein, American painter, sculptor, and printmaker, startled the art world in 1962 by exhibiting paintings based on comic book cartoons.

Roy Lichtenstein was born in New York City on October 27, 1923, the son of Milton and Beatrice Werner Lichtenstein. His father owned a real estate firm. Lichtenstein studied with artist Reginald Marsh (1898–1954) at the Art Students League in 1939. After graduating from Benjamin Franklin High School in New York City, he entered Ohio State University. However, in 1943 his education was interrupted by three years of army service, during which he drew up maps for planned troop movements across Germany during World War II (1939–45; a war in which Great Britain, France, the Soviet Union, and the United States fought against Germany, Japan, and Italy). Lichtenstein received his bachelor of fine arts degree from Ohio State University in 1946 and a master of fine arts degree in 1949. He taught at Ohio State until 1951, then went to Cleveland, Ohio, to work. In 1957 he started teaching at Oswego State College in New York; in 1960 he moved to Rutgers University in New Jersey. Three years later he gave up teaching to paint full-time.

From 1951 to about 1957 Lichtenstein's paintings dealt with themes of the American West—cowboys, Native Americans, and the like—in a style similar to that of modern European painters. Next he began hiding images of comic strip figures (such as Mickey Mouse, Donald Duck, and Bugs Bunny) in his paintings. By 1961 he had created the images for which he became known. These included advertisement illustrations—common objects such as string, golf balls, kitchen curtains, slices of pie, or a hot dogs. He also used other artists' works to create new pieces, such as Woman with Flowered Hat (1963), based on a reproduction of a work by Pablo Picasso (1881–1973). He also created versions of paintings by Piet Mondrian (1872–1944), Gilbert Stuart's (1755–1828) portrait of George Washington (1732–1799), and Claude Monet's (1840–1926) haystacks.

Lichtenstein was best known for his paintings based on comic strips, with their themes of passion, romance, science fiction, violence, and war. In these paintings, Lichtenstein uses the commercial art methods: projectors magnify spray-gun stencils, creating dots to make the pictures look like newspaper cartoons seen through a magnifying glass. In the late 1960s he turned to design elements and the commercial art of the 1930s, as if to explore the history of pop art (a twentieth-century art movement that uses everyday items). In 1966 his work was included in the Venice (Italy) Biennale art show. In 1969 New York's Guggenheim Museum gave a large exhibition of his work.

The 1970s saw Lichtenstein continuing to experiment with new styles. His "mirror" paintings consist of sphere-shaped canvases with areas of color and dots. One of these, Self-Portrait (1978), is similar to the work of artist René Magritte (1898–1967) in its playful placement of a mirror where a human head should be. Lichtenstein also created a series of still lifes (paintings that show inanimate objects) in different styles during the 1970s. In the 1980s and 1990s, Lichtenstein began to mix and match styles. Often his works relied on optical (relating to vision) tricks, drawing his viewers into a debate over the nature of "reality." The works were always marked by Lichtenstein's trademark sense of humor and the absurd.

Lichtenstein's long career and large body of work brought him appreciation as one of America's greatest living artists. In 1994 he designed a painting for the hull of the United States entry in the America's Cup yacht race. A series of sea-themed works followed. In 1995 the Los Angeles County Museum of Art launched a traveling exhibition, "The Prints of Roy Lichtenstein," which covered more than twenty years of his work in this medium.

In a 1996 exhibition at New York City's Leo Castelli gallery, Lichtenstein unveiled a series of paintings, "Landscapes in the Chinese 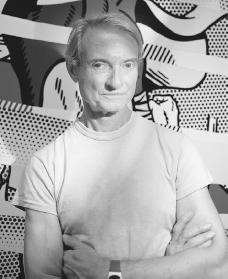 Roy Lichtenstein.
Reproduced by permission of the
Corbis Corporation
.
Style," which consisted of delicate "impressions" of traditional Chinese landscape paintings. The series was praised for its restraint (control), as common Lichtenstein elements, such as the use of dots to represent mass, were used to support the compositions rather than to declare an individual style. Lichtenstein died on September 29, 1997, in New York City, at the age of seventy-three.