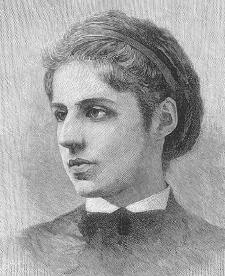 Emma Lazarus.
Courtesy of the
Library of Congress
.

Emma Lazarus, an American poet, is best known as a spokesperson for the Jewish people. Her faith in America as a safe place for all the suffering people of the world is expressed in her poem inscribed on the Statue of Liberty in New York, New York.

Emma Lazarus was born in New York City on July 22, 1849. She was the daughter of Moses and Esther Nathan Lazarus. Her father was a wealthy sugar merchant. Emma and her sisters were educated by private tutors and spent their summers at the seashore in Rhode Island. Emma read many of the books in her father's library and quickly learned other languages, including Italian, French, and German. At the age of eleven she began writing poems with traditional romantic themes and translating the works of German and French poets.

When Emma was seventeen her father paid to have her first collection of poems printed. Poems and Translations (public edition 1867) was followed by Admetus and Other Poems (1871). These poems so pleased the writer Ralph Waldo Emerson (1803–1882) that he invited Lazarus to visit him, beginning a correspondence that lasted throughout her life. Lazarus also received support and advice from other male writers throughout her life, including the novelist Henry James (1843–1916).

Lazarus's work began appearing regularly in Lippincott's Magazine and Scribner's Monthly. In 1874 she published her first prose (a style of writing closer to normal speech than poetry), Alide: An Episode of Goethe's Life. Her five-act drama, The Spagnoletto (1876), which focuses on Italy in 1655, was not as well received as her poetry. Her translation of the German poet Heinrich Heine's (1797–1856) Poems and Ballads (1881) was considered the best version of Heine in English at the time.

The turning point in Lazarus's life was the outbreak of violent anti-Semitism (hatred of Jewish people) in Russia and Germany during the early 1880s. When a writer defended these activities in the Century Magazine, Lazarus wrote the angry reply "Russian Christianity versus Modern Judaism" in the next issue. From this moment on she began a private crusade for her people. Her verse took on a new tone of urgency, a call for Zionism (the movement for the creation of an independent Jewish state), particularly in Songs of a Semite (1882) and in her play of twelfth-century Jewish life, The Dance to Death. More importantly, she began to organize relief efforts for the thousands of Jewish immigrants crowding into the United States and to write a series of articles for the magazine American Hebrew.

In 1883 Lazarus sailed for England, where she was received with great enthusiasm for her work on behalf of Jewish immigrants. She made so many friends among the Zionists that she returned in 1885, spending the next two years traveling in England, France, and Italy. Cancer cut her career short. She returned to New York City shortly before her death from cancer on November 19, 1887. Lazarus's poem "The New Colossus" was engraved on the base of the Statue of Liberty in New York harbor before its dedication in 1886. The poem was a fitting tribute to her faith in American ideals.

WONDERFUL !I REALLY APPRECIATE YOU POSTING THIS INFORMATION ABOUT EMMA LAZARUS ... I REALLY NEEDED TO KNOW THIS STUFF!