Aleading expert on international relations since the 1950s, Henry Kissinger was secretary of state under Presidents Richard Nixon (1913–1994) and Gerald Ford (1913–). His impressive career also includes becoming the cowinner of the Nobel Peace Prize in 1973.

Henry Kissinger was born Heinz Alfred Kissinger on May 27, 1923, in Furth, Germany. He was the first of the two sons of Paula Stern Kissinger and Louis Kissinger. His father was a teacher who lost his job and career when the Nazis, carrying out the orders of Adolf Hitler (1889–1945), began persecuting (causing people to suffer for their beliefs) Jewish people in Germany. (The Nazi party was in control of the government of Germany from 1933 to 1945.) As a boy Kissinger loved sports but was a better student than athlete. When German anti-Semitism (hatred of Jewish people) increased, the family decided to leave Germany in 1938, moving first to England and then several months later to the United States. The family settled in New York City, where Kissinger completed high school and began taking night classes at City College with the intention of becoming an accountant. While attending college he worked at a factory during the day.

During World War II (1939–45; a war involving the United States and many other countries in the world in which millions of people lost their lives) Kissinger joined the military and served in Germany, working in Army Intelligence. He also became an American citizen during the war. Following the war Kissinger remained in Europe as an instructor at the European Command Intelligence School in Germany. In 1947 he returned to the United States and enrolled at Harvard University. He graduated in the class of 1950 with a degree in government. He continued his studies as a graduate student, earning his master's degree in 1952 and his Ph.D. in 1954, while also teaching at the university.

An expert on international affairs

Between 1952 and 1969 Kissinger directed the Harvard International Seminar, a type of study in which advanced students, led by a professor, conduct research, share their findings, and contribute to discussions. The seminar was held during the summer months. In this position, he was visited by many international figures with whom he would later deal as a foreign-affairs official. As part of the Council on Foreign Relations he published Nuclear Weapons and Foreign Policy, which added to his reputation as a leading expert on international relations and national defense policy. For eighteen months beginning in 1956 he was director of a Rockefeller Brothers Fund special studies project—a program developed to investigate possible domestic and international problems. In 1957 he became a lecturer (public speaker) at Harvard. He was promoted to professor in 1962.

Kissinger served as a consultant (one who gives professional advice) to the National Security Council, to the Arms Control Disarmament Agency, and to the Rand Corporation. From 1962 to 1965 he worked full time at Harvard. In 1965 he became a consultant to the State Department on Vietnam. He visited Vietnam several times between 1965 and 1967. Most of 1968 he spent working on the unsuccessful bid of New York Governor Nelson Rockefeller (1908–1979) for the Republican nomination for the presidency. In spite of Rockefeller's defeat by Richard Nixon, at Rockefeller's urging Nixon considered and appointed Kissinger to head the National Security Council.

Kissinger did not agree with the U.S. foreign policy toward the Soviet Union that had been developed under former presidents. He thought their positions had been inconsistent and too friendly. Kissinger viewed the Soviet Union as the main opponent of the United States in international affairs, but he had respect for the role of the Soviet Union as one of the superpowers. His attempts to ease tensions, known as détente (day-TAHNT), 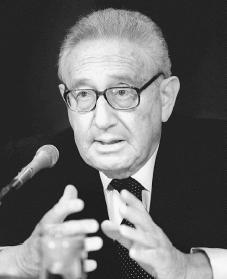 Henry Kissinger.
Reproduced by permission of
AP/Wide World Photos
.
improved relations between the Soviet Union and the United States. As a result, one of Kissinger's early successes during this period of détente was the completion of talks on the Strategic Arms Limitations Treaty (SALT). SALT was an agreement between the Soviet Union and the United States to limit the number of nuclear weapons in each country. The discussions lasted for nearly three years and ended with the signing of an agreement in Moscow, Russia, by President Nixon and Soviet Communist Party Chief Leonid Brezhnev (1906–1982).

Kissinger also played an important part in the settlement of the Quadripartite Agreement on Berlin, Germany, in September 1971. Berlin had been the source of problems between the East and West for many years, particularly after the creation of the Berlin Wall by the East German government in 1961 to prevent people from leaving the country. Through official negotiations (giveand-take discussions to settle an issue) handled by Ambassador Kenneth Rush (1910–1994), and secret negotiations directly involving Kissinger, an agreement was made to make it easier to travel between East and West Berlin. This agreement also improved relations between the United States and the former Soviet Union.

Another of Kissinger's successes (and one that caught the media by surprise) was the organization of Richard Nixon's approach to China. The United States had refused to recognize the People's Republic of China following the civil war that left Communists under Mao Zedong (1893–1976). Communists believe in revolution to establish a system in which the means of production—land, factories, mines, and so on—are owned by all people in common. Early in Nixon's first term as president, efforts were made to allow interaction between China and the United States. Taking advantage of international conditions and moving secretly with the help of Pakistani President Yahya Khan (1917–1980), Kissinger flew to China and arranged for an invitation for Nixon to make an official state visit. Nixon's visit to China in 1972 provided guidelines for the establishment of U.S.-China relations. During his eight years in the National Security Council and State Department, Kissinger flew to China a total of nine times.

Kissinger was criticized most and forgiven least for his handling of the fighting in Southeast Asia. The U.S. involvement in the Vietnam War (1955–75) had driven President Lyndon Johnson (1908–1973) from office, and it had been the desire of the Nixon administration to seek "peace with honor." The Vietnam War was a war in which the government of South Vietnam, with U.S. assistance, fought against a Communist takeover by North Vietnam. Kissinger's approach was to negotiate from a position of strength. The direct U.S. involvement in Vietnam reflected this position, but the secret bombing of Cambodia—referred to as the "secret war"—was criticized as an excessive use of military strength to force U.S. opponents to agree to end the war. All U.S. involvement in Southeast Asia was an attempt to keep Vietnam, Cambodia, and Laos from becoming controlled by Communist groups. The secret bombing of Cambodia was eventually stopped by actions of Congress. Kissinger successfully negotiated a truce with his North Vietnamese counterpart Le Duc Tho (1911–1990) in Paris and shared the Nobel Peace Prize in 1973 with him.

Kissinger had gone along with the wishes of Secretary of State William Rogers (1913–2001) while on the National Security Council. Following his appointment as secretary of state in 1973, he changed his hands-off policy toward the Middle East. During the three years he was secretary of state, Kissinger conducted what became known as "shuttle" diplomacy (negotiations between nations). He served as the middleman in negotiations to restore peace among Middle Eastern nations. Kissinger would often fly from Egypt to Israel to Syria or elsewhere and back again as he worked to help develop agreements to secure peace. In all, Kissinger made eleven "shuttle" missions, the longest lasting nearly a month.

After leaving office following Ford's loss to Jimmy Carter (1924–) in the 1976 presidential election, Kissinger was self-employed as the director of a consulting firm dealing with international politics. He received the Presidential Medal of Freedom, the nation's highest award given to a civilian (nonmember of a military, police, or fire-fighting unit), in 1977. He also received the Medal of Liberty, an award that was given only once, in 1986, to ten foreign-born American leaders.

Kissinger produced two books of memoirs (accounts of his experiences) to explain events that had happened while he was in office. These explanations did not change the views of many critics, who believed that Kissinger had made major mistakes in developing U.S. foreign policy. In 1997 former Secretaries of State Kissinger and Alexander Haig (1924–) came under fire for their roles in helping U.S.-China trade. Some said that they stood to profit from contracts with the Chinese and that some of their dealings put the United States in a vulnerable (open to attack or damage) position. In 2001 Kissinger was named chancellor (president) of the College of William and Mary in Williamsburg, Virginia.