The major works of the German philosopher Immanuel Kant offer an analysis of theoretical and moral reason and the ability of human judgment. He had a great influence on the intellectual movements of the nineteenth and twentieth centuries.

The fourth of nine children of Johann Georg and Anna Regina Kant, Immanuel Kant was born in the town of Königsberg, East Prussia, on April 22, 1724. Johann Kant was a harness maker, and the large family lived a humble life. The family belonged to a Protestant religious group of Pietists (a German religious movement whose members strongly believed in religious experience and biblical study), and a concern for religion touched every aspect of their lives. Although Kant became critical of formal religion, he continued to admire the "praiseworthy conduct" of Pietists. Kant's elementary education was at Saint George's Hospital School and then at the Collegium Fredericianum, a Pietist school, where he remained from 1732 until 1740. Here he gained a deep appreciation for the classics of Latin literature, especially the poet Lucretius.

In 1740 Kant entered the University of Königsberg. He became interested in philosophy, mathematics, and the natural sciences. The death of Kant's father in 1746 left him without income. He became a private tutor for seven years in order to have enough time and money to continue his education. During this period Kant published several papers dealing with scientific questions. The most important was the "General Natural History and Theory of the Heavens" in 1755. In this work Kant concluded the origin of the solar system was a result of the gravitational (having to do with the force exerted between bodies of matter) connection of atoms (the smallest pieces of matter). In the same year Kant presented a Latin treatise, "On Fire," to qualify for the doctoral degree.

Kant spent the next fifteen years (1755–1770) as a lecturer. In order to live he lectured between twenty-six and twenty-eight hours a week. Despite this enormous teaching burden, Kant continued to publish papers on various topics. He finally achieved a professorship at Königsberg in 1770.

At the age of fifty-seven Kant published the first edition of the Critique of Pure Reason (1781; 2d ed. 1787). This enormous work is one of the most important and difficult books in Western thought. The aim of the critique is to explain how experience and reason interact in thought and understanding. The Critique of Pure Reason is a methodology (a collection of methods and rules) of how "understanding and reason [the power of understanding] can know apart from experience." This revolutionary proposal means that the mind organizes our experiences into the way the world appears and the way that we think about the world. Any experience is placed into one of these categories so that it can be understood. Kant also wrote that the mind can have knowledge of things that have or have not been experienced, but these are only possibilities. Kant does not say that the mind creates objects—only the conditions under which objects are noticed and understood. We can never know noumenal reality (theoretical objects or ideas that are understood by thought alone) with any certainty.

Kant suggests that the theories of God, freedom, and immorality (something that goes against ideas or right and wrong) are not proved or disproved through the use of reason, nor can the use of scientific methods prove or disprove their existence. The idea of them is beyond the realm of human experience. Kant expressed that faith in God, freedom, and immorality are rational beliefs because their existence makes an orderly and moral world a possibility.

In 1783 Kant restated the main outlines of his first critique in a brief, analytic form in the Prolegomena to Any Future Metaphysics. In 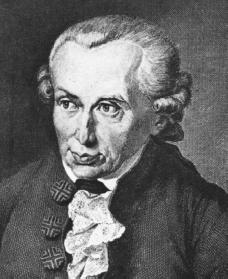 Immanuel Kant.
Reproduced by permission of
Archive Photos, Inc.
1785 he presented an early view of the practical aspects of reason in Fundamental Principles of the Metaphysic of Morals. In 1788 he published the Critique of Practical Reason.

While theoretical reason is concerned with knowledge, practical reason is concerned with will, or self-determination. There is only one human reason, but after it decides what it can know, it must determine how it shall act. Thus the freedom of the will determines how one shall lead his life. And the basic, reasonable principle of a free morality (a morality that one is free to choose) is some universal and necessary law which follows. This principle is called by Kant the "Categorical Imperative," which states that a man should act in a way that is acceptable and applicable to all people. In questioning the outcome of man's freedom, Kant insists that practical reason assumes the immortality of the soul and the existence of God as the conditions for true freedom.

Although Kant continued to write until shortly before his death, the "critical works" are the source of his influence. Only a life of extraordinary self-discipline enabled him to accomplish his task. He was barely five feet tall and extremely thin, and his health was fragile. Toward the end of his life he became increasingly antisocial and bitter over the growing loss of his memory and capacity for work. Kant became totally blind and finally died on February 12, 1804, in Königsberg.