Ben Jonson was an English playwright and poet best known for his satiric comedies (types of comedies that poke fun at human weaknesses). In many peoples opinion he was, next to William Shakespeare (1564–1616), the greatest dramatic genius of the English Renaissance (roughly the fourteenth through sixteenth centuries).

Ben Jonson was probably born in or near London, England, about a month after the death of his father, a clergyman (someone who works for the church). His father gained his position when King Henry VIII (1491–1547) ruled England, but lost it after Queen Mary (1516–1558) took the throne.

Jonson's mother then married a bricklayer. This may be why he did not continue his schooling. His stepfather made him work in the more practical business of bricklaying. Jonson also spent some time as a soldier and a traveling actor. He married sometime between 1592 and 1595.

Many people thought that English literature, and particularly drama, had already reached as high as it could when Ben Jonson began his career. But Jonson helped it gain even higher goals. Jonson's special gift was his strong sense of artistic form and control. Although an accomplished scholar, he could also write in the way everyday people spoke. It was because of this skill that he was liked by both people who were well read and by people who did not have an advanced education.

Jonson's first major play was Every Man in His Humour. It was performed by a theater group called the Lord Chamberlain's Men. William Shakespeare performed the lead role. This play is a model of what is called the "comedy of humors," in which each character's action is ruled by a whim (impulse) or affectation (artificial behavior meant to impress others). After this play Jonson wrote Every Man out of His Humour in 1599 or early 1600, followed closely by Cynthia's Revels (1601) and Poetaster (1601).

Jonson gained fame when he wrote Volpone, or the Fox in 1606. It was loved not only by the people in London but also by the scholars at the universities of Oxford and Cambridge. This was a major success for Jonson. After Volpone, Jonson wrote Epicoene, or the Silent Woman (1609), The Alchemist (1610), and Bartholomew Fair (1614). 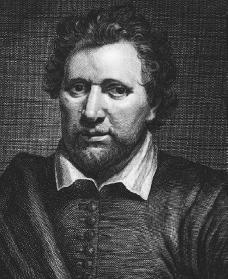 Ben Jonson.
Courtesy of the
Library of Congress
.

After Bartholomew Fair, Jonson did not write very well. However, many young poets and playwrights considered him a hero and called themselves "sons of Ben" or the "tribe of Ben." He was always considered an impressive and respected figure.

Much of the information about Jonson's personal life comes to us after this last period of playwriting. He spent a lot of time with the Scottish poet William Drummond of Hawthornden (1585–1649) in 1618. Drummond wrote down all the conversations he had with Jonson. Drummond said that Jonson was "a great lover and praiser of himself, a contemner [despiser] and scorner of others, given rather to lose a friend than a jest." In other words, Jonson made many jokes about other people and considered himself superior to others.

Jonson also wrote many other nondramatic writings, including a grammar of English, a miscellaneous (made of many different parts) collection of notes, and reflections on various authors entitled Timber, or Discoveries (also printed in 1640). He also wrote a large number of poems, almost all of them written in response to particular events in the poet's experience. Most of his poetry was written in short lyric (songlike) forms, which he handled with great skill. Jonson's poetic style also tends to be simple and unadorned yet highly polished, as in the epigram (a short witty poem) on the death of his first daughter, which begins "Here lies to each her parents ruth [sorrow],/Mary, the daughter of their youth."

After the death of King James I of England (1603–1625) in 1625, Jonson suffered a number of setbacks. His talents were not fully appreciated by the new king, and as a result Jonson was frequently short of money. He was paralyzed in 1628 due to illness and confined for the remainder of his life to his home in Westminster. He continued his scholarly study of the classics, which had occupied him throughout his active life.

Jonson died on August 6, 1637. Because he was considered one of the most accomplished writers of the time, he was given the special honor of being buried in Westminster Abbey, in England.

Partridge, Edward B. The Broken Compass: A Study of the Major Comedies of Ben Jonson. New York: Columbia University Press, 1958.