The French national heroine Joan of Arc led a troop of French soldiers and served as a temporary focus of French resistance to English occupation in the last phase of the Hundred Years War (1339–1453), a war with England which caused severe hardship in France. Joan of Arc's place in history was finally solidified in the twentieth century when she was declared a saint.

In 1392 the insanity of the French king, Charles VI (1368–1422), had begun the struggle between two factions (rival groups) to control the kingdom, the Burgundians and the Armagnacs. The leader of the Armagnacs, John the Fearless (1371–1419), Duke of Burgundy, finally assumed control, as both sides appealed for help to England. Henry V (1387–1422) of England invaded France in 1415 and delivered a shattering defeat upon the French. The English and Burgundians entered Paris in 1418, and the murder of John the Fearless in 1419 strengthened Burgundian hatred for the Armagnac faction.

In 1420 Charles VI, Henry V, and Philip the Good (1396–1467) of Burgundy agreed to the Treaty of Troyes. The treaty said that Henry was to act as regent, or acting ruler, for the mad Charles VI, marry Charles's daughter, then inherit the throne of France upon Charles's death. The treaty thus disinherited Charles VI's son, Charles VII (1403–1461). In 1422 both Henry V and Charles VI died, leaving Henry VI, the infant son of Henry, as king of both kingdoms. Henry VI, through his regent, the Duke of Bedford, ruled unchallenged in Normandy and the Île-de France. In the autumn of 1428 the English attacked Orléans, the key city to Charles's land. Charles, lacking in men and money, could do nothing. By the spring of 1429 the city appeared about to fall and with it the hopes of Charles VII.

Joan was born to a peasant family in Domrémy, France, a small town near Vaucouleurs, the last town in the east still loyal to Charles VII. "As long as I lived at home," she said at her trial in 1431, "I worked at common tasks about the house, going but seldom afield with our sheep and other cattle. I learned to sew and spin: I fear no woman in Rouen at sewing and spinning."

Some time in 1425 Joan began to have visions—"When I was thirteen, I had a voice from God to help me govern myself." The voice was that of St. Michael, who, with St. Catherine and St. Margaret, "told me of the pitiful state of France, and told me that I must go to succor [assist] the King of France." Joan twice went to Robert de Baudricourt, the captain of Vaucouleurs, asking for armor, a horse, and an escort to Charles VII at Chinon, but her request was denied both times. However, Joan was both persistent and persuasive, and when she went to de Baudricourt a third time he granted her request. She set out in February 1429, arriving eleven days later at Chinon. 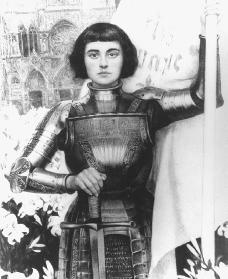 Joan of Arc.
Reproduced by permission of the
Corbis Corporation
.

Joan of Arc was once described: "This Maid … has a virile [man-like] bearing, speaks little, shows an admirable prudence [carefulness] in all her words. She has a pretty, woman's voice, eats little, drinks very little wine; she enjoys riding a horse and takes pleasure in fine arms, greatly likes the company of noble fighting men, detests [dislikes] numerous assemblies and meetings, readily sheds copious [many] tears, has a cheerful face.…" Joan appears to have been robust, with dark brown hair, and, as one historian remarked, "in the excitement which raised her up from earth to heaven, she retained her solid common sense and a clear sense of reality."

In April 1429 Charles VII sent her to Orléans as captain of a troop of men—not as leader of all his forces. With the Duke d'Alençon and Jean, the Bastard of Orléans (later Count of Dunois), Joan relieved the city, thus removing the greatest immediate threat to Charles and for the first time in his reign allowing him a military triumph.

Although Charles VII appears to have accepted Joan's mission, his attitude toward her, on the whole, is unclear. He followed her pressing advice to use the relief provided by the success of Orléans to proceed to his coronation (crowning ceremony) at Reims, thereby becoming king in the eyes of all men. Charles VII was crowned at Reims on July 18, 1429. Joan was at his side and occupied a visible place in the ceremonies following the coronation.

From the spring of 1429 to the spring of 1430, Charles and his advisers were undecided on the course of the war. Joan favored taking the military offensive against English positions, particularly Paris. An attack upon Paris in September 1429 failed, and Charles VII entered into a treaty with Burgundy that committed him to virtual inaction.

From September 1429 to the early months of 1430, Joan appears to have been kept inactive by the royal court, finally moving to the defense of the town of Compiègne in May 1430. During a small battle outside the town's walls against the Burgundians, Joan was cut off and captured. She was a valuable prize. The Burgundians turned Joan over to the English, who prepared to try her for heresy, or having opinions that conflict with the beliefs of the church. Charles VII could do nothing.

Joan's trial was held in three parts. Technically it was an ecclesiastical (involving the church) trial for heresy (having religious beliefs that are against those held by the church), and Joan's judges were Pierre Cauchon (1371–1442), the bishop of Beauvais, and Jean Lemaitre, vicar of the inquisitor of France, or the religious assistant to the top judge in France. Both were aided by a large number of theologians (those that study religion) and lawyers who sat as a kind of consulting and advising jury.

From January to the end of March, the court investigated Joan's "case" and questioned witnesses. The trial itself lasted from April to nearly the end of May and ended with Joan's abjuration, or renouncing her faith. The trial was both an ecclesiastical one and a political one. Joan was charged with witchcraft and fraud, or a willful cheating. She was tested by being asked complicated theological (involving religious teachings) questions, and finally condemned (found guilty) on the grounds of persisting in wearing male clothing, a technical offense against the authority of the Church.

Joan's answers throughout the trial reveal her presence of mind, humility, wit, and good sense. Apparently Joan and her accusers differed about the nature of her abjuration, and two days after she signed it, she recanted, or withdrew her previous belief.

The third phase of her trial began on May 28. This time she was tried as a relapsed heretic, conviction of which meant "release" to the "secular arm," that is, she would be turned over to the English to be burned. Joan was convicted and she was burned at the stake in the marketplace of Rouen on May 30, 1431.

From 1450 to 1456 a reinvestigation of Joan's trial and condemnation was undertaken by ecclesiastical lawyers. On July 7, 1456, the commission declared Joan's trial null and void, thereby freeing Joan from the taint of heresy. The Joan of Arc legend, however, did not gather momentum until the seventeenth century. In spite of her legend, Joan was not canonized (declared a saint) until May 16, 1920.

Brooks, Polly Schoyer. Beyond the Myth: The Story of Joan of Arc. New York: Lippincott, 1990.

Also read article about Joan of Arc from Wikipedia