Jesus of Nazareth, also known as Jesus Christ, was the central personality and founder of the Christian faith.

Jesus first came to general attention at the time of his baptism (religious ritual performed shortly after a child's birth), just prior to his public ministry. He was known to those around him as a carpenter of Nazareth, a town in Galilee, and as the son of Joseph (John 6:42). Matthew and Luke report that Jesus was born in Bethlehem, famous in Jewish history as the city of David. They further report that he was miraculously (something that occurs that cannot be explained by nature's laws) born to the Virgin Mary, although they both curiously trace his kinship to David through Joseph, to whom Mary was engaged. It is likely that Jesus was born not later than 4 B.C.E. , the year of King Herod's death. (The term Christ is actually a title, not a proper name; it comes from the Greek Christos, meaning the anointed, or the one chosen by God; in the Bible it is the Greek equivalent for the Hebrew word Messiah.)

Little is known of Jesus' childhood and youth. The letters of Paul are the earliest biblical records that tell about Jesus. But the four biblical Gospels by Matthew, Mark, Luke, and John, although written later, used sources that in some cases go back very close to the time of Jesus. But about the year 28 or 29 C.E. his life interacted with the career of John the Baptist. Jesus heard John's preaching and joined the crowds for baptism in the Jordan River. Following his baptism Jesus went into the desert for prayer and reflection.

Returning from the desert, Jesus began preaching and teaching in Galilee. His initial declaration was both frightening and hopeful. It told people not to cling to the past, that God would overthrow old institutions and ways of life for a wonderful new future. This future would be especially welcomed by the poor, the powerless, and the peacemakers.

Jesus attracted twelve disciples to follow him. They were mainly fishermen and common workers. Of the twelve it seems that Peter, James, and John were closest to Jesus. Peter's home in Capernaum, a city on the Sea of Galilee, became a headquarters from which Jesus and the disciples moved out into the countryside. Sometimes he talked to large crowds, with the twelve to teach only them, or he might go off by himself for long periods of prayer.

The records concerning Jesus report many miracles (an event that goes against the laws of nature and has suggested divine influence). For centuries most people in civilizations influenced by the Bible not only believed literally in the miracles but took them as proof that Jesus had supernatural (something that is not normal, possibly with a spiritual influence) power. Then, in an age of reason and distrust, men often doubted the miracles and exposed the reports as dishonest. However, usually the Gospels report the healings as signs of the power of God and His coming kingdom.

Jesus taught people in small groups or large gatherings; his lessons are reported in friendly conversations or in arguments with those who challenged him. At times he made a particularly vivid comment in the midst of a dramatic incident.

The starting point of Jesus' message, as already noted, was the announcement of the coming of the kingdom of God. Since this kingdom was neither a geographical area nor a system of government, a better translation may be "God's reign" (God being in existence everywhere).

The rest of Jesus' teaching followed from this message about the reign of God. At times he taught in stories or parables that described the kingdom or the behavior of people who acknowledged God's reign. At times he pronounced moral commandments detailing the demands upon men of a loving and righteous God. At times Jesus taught his disciples to pray: the words that he gave them in the Lord's Prayer are often used today.

To some people Jesus was a teacher, or rabbi. The healing ministry did not necessarily change that impression of him because other rabbis were known as healers. But Jesus was a teacher of peculiar power, and he was sometimes thought to be a prophet (a person who tells of things that have been made known to him or her by a divine power). 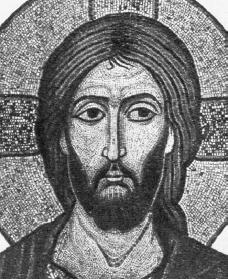 On the day now known as Palm Sunday, Jesus entered Jerusalem, while his disciples and the crowds hailed him as the Son of David, who came in the name of the Lord. The next day Jesus went to the Temple and drove out the money-changers and those who sold pigeons for sacrifices, accusing them of turning "a house of prayer" into a "den of robbers." This act was a direct challenge to the small group of priests who were in charge of the Temple, and they clearly took offense to it. During the following days he entered into disagreements with the priests and teachers of religion. Their anger led them to plot to get rid of him, but they hesitated to do anything in the daytime, since many people were gathered for the feast of Passover (a Jewish religious holiday).

On Thursday night Jesus had a meal with his disciples. This meal is now re-enacted by Christians in the Lord's Supper, the Mass, or the Holy Communion. After the meal Jesus went to the Garden of Gethsemane, where he prayed alone. His prayer shows that he expected a conflict, that he still hoped he might avoid suffering, but he expected to do God's will. There into the garden one of his disciples, Judas Iscariot, led the priests and the temple soldiers, who seized Jesus.

That same night Jesus' captors took him to a trial before the temple court, the Sanhedrin. Much evidence indicates that this was an illegal trial, but the Sanhedrin declared that Jesus was a blasphemer (a person who claims to be God or godlike) deserving death. Since at that time only the Roman overlords (supreme lords) could carry out a death sentence, the priests took Jesus to Pilate, the Roman governor of Judea.

Pilate apparently was reluctant to convict Jesus, since it was doubtful Jesus had disobeyed any Roman laws. Jesus, however, represented a threat to both the Sanhedrin and the Romans. Pilate thus ordered the crucifixion of Jesus. Roman soldiers beat him, put a crown of thorns on his head, and mocked him as a false king. Then they took him to the hill Golgotha ("the Skull"), or Calvary, and killed him. Pilate ordered a sign placed above his head: "King of the Jews." Jesus died and that same day (now known as Good Friday) was buried in a cave-like tomb.

On Sunday morning (now celebrated as Easter), the Gospels report, Jesus rose from the dead and met his disciples. Others immediately rejected the claim of the resurrection, and the debate has continued through the centuries.

The New Testament states very clearly that the risen Christ did not appear to everybody. Among those who saw Jesus were Cephas (Peter), the twelve disciples, "more than five hundred brethren at one time," James, and finally Paul. Other records tell of appearances to Mary Magdalene and other women and of a variety of meetings with the disciples. The four Gospels all say that the tomb of Jesus was empty on Easter morning. None of the records ever tells of an appearance of the risen Christ to anyone who had not been a follower of Jesus or (like Paul) had not been deeply disturbed by him.

The evidence is very clear that the followers of Jesus were absolutely convinced of his resurrection. The experience of the risen Jesus was so overwhelming that it turned their despair into courage. The disciples spread the conviction that he had risen, and they continued to tell their story at the cost of persecution and death. The faith in the resurrection (and later the rising up to the kingdom of God) of Jesus, despite differences in interpretation and detail, is a major reason for the rise and spread of the Christian faith.

DID Jesus HAD ANY SIBLINGS and at what age did he know or discover that hes the son of God.
2
THE ARCHANGEL GABRIEL

In answer to TSHOLOFELO: Yes, JESUS CHRIST had brothers and sisters. He was about 30 years old when he discovered that he was sent to EARTH on a mission. But JESUS was not the only messenger that GOD ever sent to EARTH. The man, known as BUDDHA, was also sent to EARTH by GOD. Basic Buddhism & Christianity are exactly the same. They both preach to LOVE your enemies and not to worry about gaining earthly material wealth. It was only in the centuries after their founders died, that different holidays and customs came into being. Thank You.
3
GABRIEL LEVY

During JESUS' time on Earth, his Apostles asked Him about when to expect Him at His SECOND COMING. JESUS said, "There will be wars and rumors of wars, and EARTHQUAKES in many different places." I believe that a certain EARTHQUAKE will announce His coming. I predict that there will be an EARTHQUAKE in San Francisco, California on Friday, September 7, 2012 at 9:41:27 PM PDT. Epicenter near Glen Canyon Park. Magnitude 4.4 Richter. Thank You for posting this website on JESUS CHRIST.
4
F. A. Casciaro

Mormon's, get it straight, Pilate and the Romans did not want to put Jesus to death! As you said, He posed no threat to them, unlike Hollywood movies made by Jew's, they wanted Him dead! And, stated to Pilate LET HIS DEATH BE ON OUR HEADS! Who knows, they may have cursed there own race, they have been scorned over the centuries, more than others! FAC
5
Ruth

This is not enough about JESUS , you do not even start it but one thing we all have to understand JESUS IS THE WAY THE TRUTH THE LIFE AND EVERYTHING , HE IS THE LIFE , KING OF KING.