Baseball great Reggie Jackson was inducted into the Baseball Hall of Fame in 1993. Jackson's hard-hitting, fast-footed style helped him lead two teams to five World Championships in only seven years. Jackson made headlines with his self-centered remarks, hot temper, and colorful manner.

Reginald Martinez Jackson was born on May 18, 1946, in Wyncote, Pennsylvania, to Martinez and Clara Jackson. Jackson was one of six children of African American and Spanish descent. When his parents divorced, young Jackson moved with two of his siblings to live with his father in Cheltenham, Pennsylvania. Although his father always provided food for the family, Jackson recalls that they often "felt poverty." His father, a tailor and a dry cleaner, was once a semi-pro baseball player in the Negro leagues, and he was largely responsible for inspiring and encouraging his talented son to pursue a career in baseball.

Education and a career with the Athletics

Jackson was an all-star athlete in track, on the football team, in basketball, and in baseball by the time he entered his senior year at Cheltenham High School. Reggie accepted a scholarship from Arizona State University. In his sophomore year he was chosen to the All-American first team in baseball. His performance caught the attention of Charles O. Finley, owner of the Kansas City Athletics, who offered Jackson a $95,000 bonus. He left college after his sophomore year and entered the world of professional baseball.

In 1968 Jackson moved with the Athletics to their new home in Oakland, California. In his first full season in the majors he hit 29 home runs and drove in another 74 runs. But he also made a dozen outfield errors and struck out a near record-breaking 171 times. 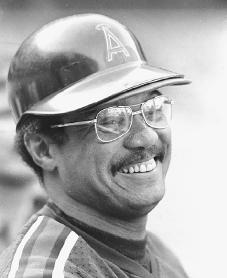 Reggie Jackson.
Reproduced by permission of
AP/Wide World Photos
.
The following season, in 1969, he again held a record number of strikeouts with 142, but he hit a fantastic 47 home runs and led the American League in scoring with 123 runs.

Trouble at home and on the field

After the end of that season Jackson's performance declined. The increasing pressures of trying to keep up with his own home-run pace, as well as troubles in his marriage to wife Jenni, contributed to his temporary decline. Further, he failed to bargain successfully with Finley for a high increase in pay. His average and his homers dropped and his continued poor performance caused him to be benched for a portion of that season.

In the winter of 1970 and 1971 Jackson went to Santurce, Puerto Rico, to work with Frank Robinson. Robinson, a veteran player-manager, helped Jackson to improve his play. Robinson's tutoring helped him to work on his aggressive playing style while keeping his temper under control.

The following season Jackson bounced back. He helped lead the Athletics to the American League Western Division title in 1971 with 32 home runs. In 1972 the Athletics won the title again. In the playoffs the Athletics beat the Detroit Tigers, with Jackson sliding into home plate to score the winning run in the final game. But he tore a muscle in one of his legs, which forced him to sit out of the World Series. Jackson watched as the Athletics defeated the Cincinnati Reds.

The Athletics won the World Series in 1974, defeating the Los Angeles Dodgers, with Jackson hitting 29 homers for the season. Finally, in 1975, after winning the American League Western Division title, Jackson ended his nine-year career with the Athletics. Finley traded Jackson to the Baltimore Orioles and he stayed with them for one season.

In 1977 Jackson signed a five-year contract as a free agent with the New York Yankees for $300,000 a year. Once again he led his team to a World Series championship. The night of October 18, 1977, was one of Jackson's greatest triumphs. In that game, he became only the second player in history to hit three home runs in one game. In the entire series, he hit five home runs, a World Series record. Jackson was named MVP of the World Series that fall. He followed that spectacular season with a second World Series win against the Dodgers in 1978. His walloping World Series hitting earned him the title "Mr. October," as he could always be counted on to pull his team to victory in the Fall Classic.

The Yankees won the American League pennant in 1981. Jackson hit his tenth and final World Series home run that year. The California Angels signed Jackson in 1982, and he reached the 500-homer mark in 1984. Jackson returned to the Athletics in 1987 and retired at the end of the season. He placed sixth on the all-time major league career home run list, with 563 home runs during his twenty-one-year baseball career.

After retiring Jackson worked briefly as a sports broadcaster for the Angels before moving on to coach for the Athletics. He then took a job with the Upper Deck Company, handling sales of trading cards and sports collectibles. On August 1, 1993, Reggie Jackson became the 216th inductee into the Baseball Hall of Fame. His achievements run to both extremes: ten World Series home runs; five World Championships; eleven American League Championships with three different teams; along with holding the major league record for lifetime strikeouts at 2,597.

The Yankees retired Jackson's number "44" baseball uniform. During the summer of 1993, Jackson returned to the Yankees as a special assistant and advisor to the general partners. Jackson continued his work in California for the trading card company, and he was made director of new business at a California-based computer company for which he was already a spokesman. He is also an avid car collector and runs a charity called the Mr. October Foundation for Kids. He has one daughter, Kimberly.

I thought the article was very informative sinnce I get tired of people saying that I look like Reggie,even back in 1977 ,even now.