Aperformer since the age of five, Michael Jackson is one of the most popular singers in history. His 1983 album, Thriller, sold forty million copies, making it the biggest seller of all time. Through his record albums and music videos he created an image imitated by his millions of fans.

Michael Joe Jackson was born in Gary, Indiana, on August 29, 1958, the fifth of Joe and Katherine Jackson's nine children. The house was always filled with music. Jackson's mother taught the children folk and religious songs, to which they sang along. Jackson's father, who worked at a steel plant, had always dreamed of becoming a successful musician. When this failed to happen, he decided to do whatever it took to make successes of his children. He tried to control his children's careers even after they were adults. The struggle for the control of the musical fortunes of the Jackson family was a constant source of conflict.

The Jackson boys soon formed a family band that became a success at amateur shows and talent contests throughout the Midwest. From the age of five Michael's amazing talent showed itself. His dancing and stage presence caused him to become the focus of the group. His older brother, Jackie, told Gerri Hershey in Rolling Stone, "It was sort of frightening. He was so young. I don't know where he got it. He just knew. "

The Jacksons' fame and popularity soon began to spread. While performing at the Apollo Theater in New York City's Harlem neighborhood in 1968, Motown recording artist Gladys Knight (1944–) and pianist Billy Taylor discovered them. Later that year singer Diana Ross (1944–) became associated with the boys during a "Soul Weekend" in Gary. With Ross's support, the Jacksons signed a contract with Motown Records. Berry Gordy (1929–), the famous head of Motown, took control of the Jacksons' careers.

By 1970 the group, known as the Jackson Five, was topping the charts and riding a wave of popularity with such hits as "ABC," "The Love You Save," and "I'll Be There," each of which sold over one million copies. The group also appeared on several televised specials, and a Jackson Five cartoon series was created. Gordy quickly recognized Michael's appeal and released albums featuring him alone. These solo albums sold as well as those of the Jackson Five. The group managed to survive Michael's voice change and a bitter break with Motown Records in 1976, but as the Jackson family they continued to fight with each other and with their own father.

In 1978 Michael Jackson appeared in The Wiz, an African American version of The Wizard of Oz. He sang the only hit from the film's soundtrack album ("Ease On Down the Road") in a duet with the star, Diana Ross. His success as the Scarecrow was a preview of what was to come in his videos, for Jackson seemed to care 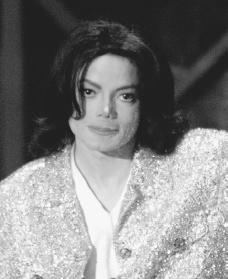 Michael Jackson.
Reproduced by permission of
Getty Images
.
most about dancing. (He later dedicated his autobiography [the story of his one's own life] to dance legend Fred Astaire [1899–1987], and the autobiography's title, Moonwalk, refers to a dance that Jackson made popular.)

While working on The Wiz, Jackson met producer Quincy Jones (1933–). They worked together on Jackson's 1979 album Off the Wall, which sold ten million copies and earned critical praise. In 1982 Jackson and Jones again joined forces on the Thriller album. Thriller fully established Jackson as a solo performer, and his hit songs from the album—"Beat It," "Billie Jean," and "Thriller"—made him the major pop star of the early 1980s. The success of Thriller (with forty million copies sold, it remains one of the best-selling albums of all time) and the videos of its songs also helped Jackson break the color barrier imposed by radio stations and the powerful music video channel MTV. By 1983 Jackson was the single most popular entertainer in America.

In 1985 Jackson reunited with Quincy Jones for USA for Africa's "We Are the World," which raised funds for the poor in Africa. Jackson's next two albums, Bad (1987) and Dangerous (1991), were not as hugely successful as Thriller, but Jackson remained in the spotlight throughout the 1980s and into the 1990s. In 1992 he founded "Heal the World" to aid children and the environment. In 1993 he was presented with the "Living Legend Award" at the Grammy Awards ceremony and with the Humanitarian (one who promotes human welfare) of the Year trophy at the Soul Train awards.

Despite Jackson's popularity and good works, he became the subject of a major scandal (action that damages one's reputation). In 1993 a thirteen-year-old boy accused Jackson of sexually abusing him at the star's home. Jackson settled the case out of court while insisting he was innocent. The scandal cost Jackson his endorsement (paid public support of a company's products) contract with Pepsi and a film deal. His sexual preference was called into question, and his public image was severely damaged.

In 1995 Jackson was criticized following the release of his new album HIStory: Past, Present, and Future, Book I. One of the songs on the album, "They Don't Care About Us," seemed to contain anti-Semitic (showing hatred toward Jewish people) lyrics (words). To avoid further criticism, Jackson changed the lyrics. He also wrote a letter of apology to Rabbi Marvin Hier, head of the Simon Wiesenthal Center for Holocaust Studies, who had protested the lyrics.

In 1994 Jackson shocked the world when he married Lisa Marie Presley, daughter of the late (deceased) rock legend Elvis Presley (1935–1977). Many felt that the marriage was an attempt to improve his public image. In August 1996 Jackson and Presley divorced. In November 1996 Jackson announced that he was to be a father. The child's mother was Debbie Rowe, a long-time friend of Jackson. They married later that month in Sydney, Australia. On February 13, 1997, their son, Prince Michael Jackson, Jr., was born in Los Angeles, California. The couple's second child, daughter Paris Michael Katherine Jackson, was born in 1998. Rowe filed for divorce from Jackson in October 1999.

Jackson and his brothers were elected to the Rock and Roll Hall of Fame in Cleveland, Ohio, in 1997. Later that year another album, Blood on the Dance Floor: HIStory in the Mix, containing new versions of songs from HIStory along with five new songs, was released. The album received good reviews, and the world continued to be fascinated by the talent and career of Michael Jackson.

In 2000 Jackson's promoter sued him for $21.2 million for backing out of two planned concerts the previous New Year's Eve. In 2001 Jackson, while delivering a lecture at Oxford University in England to promote his Heal the Kids charity, described his unhappy childhood and proposed a "bill of rights" for children that would provide for the right to an education "without having to dodge bullets." Later that year Jackson was again elected to the Rock and Roll Hall of Fame, this time as a solo performer. Jackson also released a new album, Invincible, in October 2001.

MICHAEL JACKSON IS THE KING OF POP EVER LIFE!!! I LIKE READING THIS ARTICLE IT HELP ME UNREDSANTD HIS LIFE A IT BETTER
3
Crystal

this article helped me so much on my research paper on michael jackson! thank you
4
Cait

Michael was definitly the 7th of the 9 children. Not the 5th.
5
lovely child

I am learning so much about Michael Jackson, he was very talented and gifted. He love people inspite of what men thought about him. He was Gone to Soon to finish his mission to man kind. I am thankful I was able to hear his music and see the love he had for mankind. RIP King of POP
6
amy troulis

How did Michael Jackson get his skin tern white and is it a genetic thing that runs in his family.
8
LILLIAN

Am so happy having read Micheal's biography.I've always thought he had his two kids from two different women but now i know they were from his second marriage with Miss Debbie Rowe who was a long time friend of his. He was a living legend though was gone too soon but as for me,HE STILL IS. Secondly, i would like to know what really caused his death.
9
SHOBUJ

michel jakson is a very great singer..i like him very much..
10
Arthur Pacheco

Michael Jackson was the best pop singer ever. I Loved His Music.
11
Linda

I miss Michael Jackson so much, but his music is still around. I don't think his music will leave this world. I wrote a poem just for Michael and it is in my book Poem From The Heart. Is there any way someon from the family e-mail me please. Michael is still my king of pop.

Exuse me but you got some if the the facts wrong. First of all his middle name is Josph and he was child number 8 of ten. To prove his brothers from Jackson 5 were Randy, Marlon, Jermaine, and Tito. His sisters were LaToya, Rebbie, and Janet. Marlon had a twin brother Brandon who died at birth. Sorry if this seems rude, because trust me I'm not trying to be.
14
Uriah Hillery

I honestly feel bad for this guy. He had no childhood, he was diagnosed with vitiligo, he was accused on child molestation, and he had to take so much meds that now, he is dead, where we all who knew him did not want him to be here.
15
Sethni Dahamdi

It was a nice Biography
I love it
Actually, he lost his childhood. He is the 8 th children in his family.
16
Vanessia Hill

I love Michael Jackson because he is and was a decent human being that lived during most of life as a successful entertainer in the making. He is also a loving human being that loves all children of the world. He would give most of his time to spend time with any sick or ill child that was dying, give money to foundations, and make most his time by helping the young!!!
17
Aondohemba cephas

Micheal Jackson was a great man. I love him alot, because everything about him inspires.He was loving,very caring and helpful, infact words can't really describe the lagend.