Civil rights leader Reverend Jesse Jackson has spent decades in the public eye in support of ending racial and class divisions in America. He is the founder of the Rainbow/PUSH Coalition, a group that works to improve the lives of people throughout the United States and the world.

Jesse Louis Jackson was born on October 18, 1941, in Greenville, South Carolina. He was the son of Helen Burns and her married next-door neighbor, Noah Robinson. Jackson was teased by his neighbors and classmates for being "a nobody who had no daddy." Jackson developed a strong desire to succeed and an understanding of the oppressed (those who are treated unjustly). With advice from his grandmother, Jackson overcame his childhood problems, finishing tenth in his high-school class. He earned a football scholarship to attend the University of Illinois in Chicago. Jackson, eager to get away from the prejudice (dislike of people based on their race) and segregation (separation based on race) of the South, traveled north only to find both open and hidden discrimination (unequal treatment) at the university and in other parts of the city.

After several semesters Jackson decided to leave the University of Illinois. He returned to the South and enrolled at North Carolina Agricultural and Technical College (A&T) in Greensboro, North Carolina, an institution for African American students, where he was elected student body president. As a college senior he became a leader in the civil rights movement. Jackson actively encouraged his fellow students to protest against racial injustice by staging repeated demonstrations and boycotts (protests in which, for example, organizers refuse to shop at a certain store in an attempt to get the store to change an unjust policy or position). Jackson graduated in 1964 with a degree in sociology and economics.

After graduation Jackson decided to attend the Chicago Theological Seminary. After two and a half years at the school, Jackson left the seminary (a place for religious education) in 1966 before completing his divinity degree (a degree in the study of religion). He also joined the Southern Christian Leadership Conference (SCLC), a civil rights organization led by Dr. Martin Luther King Jr. (1929–1968) that held nonviolent protests against segregation in the South. In April 1968 many of SCLC's officers—including Jackson—were drawn away from other civil rights protests by a garbage collectors' strike in Memphis, Tennessee. Tragically, King, in his attempt to prevent racial violence in that city, was killed by an assassin's bullet while standing on the balcony of his hotel room.

Jackson later claimed on national television that he had been the last person to talk to King and that he had held the dying leader in his arms, getting blood all over his shirt. The other men present agreed that this was not 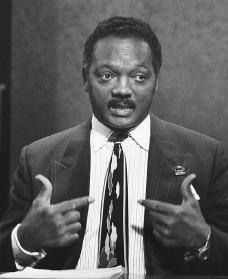 Jesse Jackson.
Reproduced by permission of
AP/Wide World Photos
.
true—that Jackson had been in the parking lot facing King when the shooting occurred and had neither climbed the steps to the balcony afterward nor gone to the hospital with King. Whatever the truth of the matter may be, Jackson's appearance on national television the next day with his bloodied shirt brought the horror of the assassination into American homes, making him a well-known national figure. This publicity caused the media to refer to him as the new leader of the civil rights movement. In 1971 Jackson was suspended from the SCLC after its leaders claimed that he was using the organization to further his own personal goals.

After his suspension, Jackson founded Operation PUSH (People United to Save Humanity). Standing in front of a picture of Dr. King, Jackson promised to begin "a rainbow coalition of blacks and whites gathered together to push for a greater share of economic and political power for all poor people in America." Jackson spoke out against racial prejudice and discrimination, military action, and class divisions in America. In 1976 Jackson created PUSH-Excel, a program aimed at encouraging children and teens to succeed. A fiery orator (public speaker), Jackson traveled from city to city delivering his message of personal responsibility and self-worth to students: "You're not a man because you can kill somebody. You are not a man because you can make a baby.… You're a man only if you can raise a baby, protect a baby and provide for a baby."

The rainbow coalition and bids for the presidency

Jackson became involved in international politics when President Jimmy Carter (1924–) approved his visit to South Africa. Jackson attracted huge crowds at rallies, where he denounced (criticized) apartheid, South Africa's political system that prevented the black majority of the population from enjoying the rights and privileges of the white minority. Later in 1979 he toured the Middle East, where he was criticized for embracing Yasir Arafat (1929–), the Palestinian leader who was considered a terrorist (a person who uses terror to force others to act in a certain way) by the American government. These international trips caused Jackson's fame and popularity to grow within the African American community.

As the 1980s began, Jackson was no longer a young man with long hair and gold chains but was instead a more mature figure seeking ways to change the Democratic Party from within. He continued to promote his "rainbow coalition" as a way for all Americans to improve the country. Jackson's support in the African American community also allowed him to influence both local and national elections. Possibly the most important campaign in which he was involved was the election victory of Harold Washington, the first African American mayor of Chicago, Illinois, in 1983. Jackson's ability to convince over one hundred thousand African Americans, many of them youths, to register to vote played a large part in Washington's victory.

Jackson decided to campaign in the 1984 presidential election as a Democrat. His campaign focused on social programs for the poor and disabled, reduced taxes for the poor, increased voting rights, effective programs to improve the job opportunities of women and minorities, and improved civil rights. He called for increased aid to African nations and more consideration of the rights of Arabs. Many senior African American politicians refused to support Jackson, believing that his candidacy would disrupt the Democratic Party and benefit the Republicans. However, many poor African Americans supported him. He received 3.5 million votes, and possibly 2 million of those voters were newly registered. Although his campaign was unsuccessful, Jackson had broken new ground while involving more African Americans in the political process.

After the 1984 election Jackson split his time between working for Operation PUSH in Chicago and his new National Rainbow Coalition, which he began in 1985, in Washington, D.C. (The two organizations later joined together to form the Rainbow/PUSH Coalition.) He ran again for the Democratic presidential nomination in the 1988 election. Although his second campaign received much wider support, Jackson finished second to Massachusetts Governor Michael Dukakis (1933–), who went on to lose the presidential election. In 1992 he backed Democratic candidate Bill Clinton (1946–) during the presidential campaign. He used his influence to urge African American voters to support Clinton. These efforts helped Clinton win the election and return a Democrat to the White House for the first time in twelve years.

Despite criticism that he was simply a cheerleader for causes and represented style more than substance, Jackson continued to speak out for civil rights and to challenge others to improve themselves. In 1995 Jackson wrote in Essence magazine, "People who are victimized may not be responsible for being down, but they must be responsible for getting up. Slave masters don't retire; people who are enslaved change their minds and choose to join the abolitionist [antislavery] struggle.… Change has always been led by those whose spirits were bigger than their circumstances.… I do have hope. We have seen significant victories during the last 25 years."

In November 1999 Jackson came to the defense of six high-school students expelled for fighting in Decatur, Illinois. The Decatur school board expelled the students for two years for their involvement in a brawl during a football game in September 1999. Jackson met with the board to try to reach a compromise that would allow the students to return to regular classes, but the board would only agree to reduce the punishment to one year and to allow the students to attend a different school. As a result, Jackson led a protest march at the school, where he was arrested for criminal trespassing.

Jackson received his master of divinity degree from the Chicago Theological Seminary on June 3, 2000. He had been only three courses short of earning his degree when he left the school more than three decades earlier. On August 9, 2000, President Bill Clinton awarded a Presidential Medal of Freedom to Jackson. The medal is the highest honor for civilians (nonmembers of military, police or fire-fighting units) in the United States. Jackson disappointed many of his followers when it became known in 2001 that he had fathered a daughter—who was twenty months old at the time of his announcement—with a woman other than his wife. "I fully accept responsibility, and I am truly sorry for my actions," he said in a written statement. Despite this setback in his personal life, Jackson continues to be a successful advocate for human rights and social change.