For over fifty years Katharine Hepburn was a successful actress on the stage and on the screen, delighting audiences with her energy, her grace, and her determination.

Katharine Hepburn was born on May 12, 1907, in Hartford, Connecticut. Reports of the year of her birth date differ, but the years most frequently cited are 1907 and 1909. In her autobiography (1991) Hepburn stated her birth date as 1907. She was one of six children (three of each gender) born to a socially prominent, well-to-do, activist family. Her mother was a well-known and passionate suffragette (supporter of women's right to vote); her physician father was a creative pioneer in the field of sexual hygiene. Her youth was filled with physical activity. Her social conscience was developed early in her life—she and her siblings formed a neighborhood performing group, sending the proceeds from one production to benefit Navajo children in New Mexico.

Educated by private tutors and at exclusive schools, Hepburn entered Bryn Mawr College in Pennsylvania in 1924. Upon graduating four years later, she immediately embarked on a successful career in the theater. Her critical success as an Amazon queen in the satire The Warrior's Husband led to a contract with the film studio RKO. In 1932 she made her film debut in that company's A Bill of Divorcement, playing opposite John Barrymore (1882–1942). She received rave reviews for her performance and achieved stardom overnight.

Hepburn's screen career lasted for over fifty years and was based on a persona whose essentials included energy, grace, determination, trim athletic good looks, and obvious upper-class breeding (as indicated, among other things, by a clipped manner of speaking). This persona, when intelligently put to use by producers and directors, led her to four Academy Awards as "Best Actress" in the films: Morning Glory (1933); Guess Who's Coming to Dinner (1967); The Lion in Winter (1968); and On Golden Pond (1981). Hepburn also received an additional eight Oscar nominations over the years for the films: Alice Adams (1935); The Philadelphia Story (1940); Woman of the Year (1942); The African Queen (1951); Summertime (1955); The Rainmaker (1956); Suddenly Last Summer (1959); and Long Day's Journey Into Night (1962). Her role in the 1975 made-for-television film Love Among the Ruins won her an Emmy award.

Hepburn's career, however, was not without its setbacks, most notable of which occured in the 1930s. A return to the Broadway stage in 1934 led to a role in a flop play, The Lake. In 1937 an important exhibitor placed an advertisement in a trade paper and described Hepburn, along with various other female stars, as "box office poison." RKO's indifferent response led Hepburn—at a cost to her of over $200,000—to buy out her contract from the company. Shortly thereafter 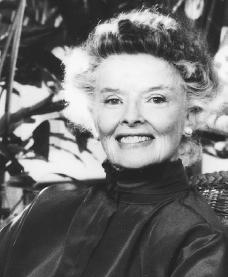 Katharine Hepburn.
Reproduced by permission of
AP/Wide World Photos
.
she was rejected for the role of Scarlett O'Hara in the film version of Gone with the Wind. (1939).

Hepburn, determined to re-establish herself, returned to the Broadway stage, playing the lead in a successful production of The Philadelphia Story. Having invested in the production, she controlled the screen rights, which she ultimately sold to Metro Goldwyn Mayer (MGM) in return for a tidy profit and the studio's guarantee that she would play the lead in the film version. She did, and the film was a critical and a commercial success. Her Oscar nomination was but one demonstration of the dramatic way she had re-established herself in Hollywood, California.

Hepburn and Tracy and other romantic interests

Hepburn's next MGM film brought Spencer Tracy (1900–1967) into her life, with whom she began a relationship that lasted over two decades, until his death in 1967. Although separated from his wife, Tracy never divorced her. His romance with Hepburn was a quiet, tender, and private affair. In the 1960s Hepburn interrupted her career to care for the ailing Tracy. They were a team professionally as well as personally. They made nine films together over a period of twenty-five years, including: Woman of the Year (1942); Keeper of the Flame (1942); Without Love (1945); Sea of Grass (1947); State of the Union (1948); Adam's Rib (1949); Pat and Mike (1952); The Desk Set (1957); and Guess Who's Coming to Dinner (1967). Not all of these films were commercially or critically successful, but whether comedies or dramas, they were provocative and interesting, especially for their emphasis on the personal interaction between the sexes. Both Tracy and Hepburn played strong characters in these films, but neither was forced to give in to the other.

Hepburn had been married in 1928 to the social and well-to-do Ludlow Ogden Smith, who had changed his name to Ogden Ludlow because she did not want to be Kate Smith. The marriage actually lasted about three weeks before the couple separated, but they were not divorced until 1934. They remained friendly afterwards. Among her other romantic attachments in the 1930s was the well-known businessman and millionaire Howard Hughes (1905–1976).

Hepburn was not particularly lucky in her choice of work after the beginning of the 1970s. Except for a few notable exceptions, such as On Golden Pond (1981), the roles did not make good use of her considerable talents. Her television debut in 1972 as the mother in a version of Tennessee Williams' (1911–1983) moving The Glass Menagerie was not favorable. While apparently a great deal of fun for the stars on location, a pairing with the rugged action star John Wayne (1907–1979) in Rooster Cogburn (1975) proved to be lifeless. She had some success playing the noted French designer Coco Chanel (1883–1971) in a Broadway musical that opened in 1969; Coco had a long run but did not make impressive use of her capabilities. Several later Broadway undertakings proved to be failures.

Although Hepburn suffered some significant injuries in a 1985 automobile accident, and illnesses usual to one of her years, she golfed, cycled, and swam in the sea into her nineties. Katharine Hepburn provided some new perspectives on her personality and the roles she played on stage and screen in her autobiography, published after she retired from performance. In it she stressed the important influence of her intellectual family, and her continued closeness with her siblings and their children.

Katharine Hepburn never conformed to the traditional star image, but there is no doubt that she was a super star as an actress in movies, on stage, and on television. A strong-minded, independent woman, she has lived her life and her career to suit herself. In the process she has entertained, delighted, and aroused millions, and she has done so without compromising her beliefs.

I can't remember the name of the actress who was Kate's neice also. She looked a lot like Kate and was an actress. She married an actor and i can't remember his name either. Help!