Mikhail Gorbachev achieved national recognition as member of the Communist Party, the dominant political party of the former Soviet 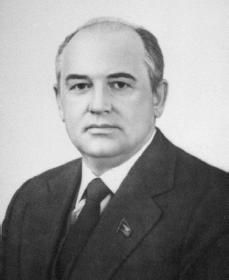 Mikhail Gorbachev.
Courtesy of the
Library of Congress
.
Union that believes in the common ownership of goods and services. In March 1985 the Soviet Communist Party elected him general secretary of the party and leader of the Soviet Union. He resigned in 1991 shortly after the fall of communism.

Mikhail Sergeevich Gorbachev was born into a peasant family in the village of Privolnoe, near Stavropol, Soviet Union, on March 2, 1931. As a teenager, he worked driving farm machinery at a local machine-tractor station. Gorbachev's experience here undoubtedly educated him well about the serious problems of food production and political administration in the countryside. He also became familiar with the control of the KGB (the Soviet secret police), knowledge which would serve him well in his future career.

In 1952 Gorbachev joined the Communist Party and began studies at the Moscow State University, where he graduated from the law division in 1955. He also met and married fellow student Raisa Titorenko, in 1953.

With Soviet Premier Joseph Stalin's (1879–1953) death, the Soviet Union began a period of political and intellectual unrest which paved the way for a major restructuring of the Soviet Union's political system and economic administration. For young party activists like Gorbachev this was a period of exciting changes and challenges.

After his graduation Gorbachev returned to Stavropol as an organizer for the Komsomol (Young Communist League) and began a successful career as a party administrator and regional leader. In 1962 he was promoted to the post of party organizer for collective and state farms in the Stavropol region and soon took on major responsibilities for the Stavropol city committee as well. Party leader Leonid Brezhnev (1906–1982) rewarded his ability by appointing him Stavropol first secretary in 1966, roughly equivalent to mayor.

After gaining additional political training Gorbachev moved quickly to assume direction of the party in the entire Stavropol region. In 1970 he assumed the important post of first secretary for the Stavropol Territorial Party Committee. This position, which is similar to a governor in the United States, proved a stepping stone to Central Committee membership and national recognition.

Gorbachev was assisted in his rise to national power by close associations with Yuri Andropov (1914–1984), who was also from the Stavropol region, and Mikhail Suslov, the party's principal ideologist. In 1978, at the request of Brezhnez, Gorbachev went to Moscow as a party secretary responsible for agricultural administration. Despite problems with agriculture in the Soviet Union at this time, Gorbachev gained a solid reputation as an energetic and informed politician. His activist style was just the thing to oppose most of the aging leaders in the Kremlin, a building in Moscow which houses the government.

The political rise of Yuri Andropov after the death of Leonid Brezhnev in January 1980 greatly strengthened the position of the up-and-coming Gorbachev as both men showed impatience with outdated practices and inefficiencies of the Soviet Union's economy. In October 1980, Gorbachev became a member of the ruling Politburo, the small group at the top of the Communist Party.

A new type of Soviet leader?

As he took power in March 1985, Gorbachev brought a fresh new spirit to the Kremlin. Young, energetic and married to an attractive, stylish, and educated woman, he represented a new generation of Soviet leaders, free from the direct experiences of Stalin's terror which so hardened and corrupted many of his elders.

Gorbechev's first steps as head of the party were designed to improve economic productivity. He began an energetic campaign against inefficiency and waste and indicated his intention to "shake up" lazy and ineffective workers in every area of Soviet life, including the party. He also revealed an unusual friendliness. Shortly after taking power Gorbachev also moved to develop greater rapport with ordinary citizens, taking to the streets on several occasions to discuss his views and making a number of well-publicized appearances at factories and other industrial institutions.

As Prime Minister Gorbachev also sought to establish better relations with the United States, which might allow some reduction in Soviet defense spending in favor of consumer goods. In November 1985 he met with President Reagan (1911–) in Geneva to discuss national and international problems. Little progress was made but both leaders agreed to hold another "summit" meeting in the United States in 1986.

When new tensions developed between the two powerful countries, the leaders agreed to hold a preliminary meeting at Reykjavik, Iceland, on October 11–12, 1986. But the clearest signs of improving Soviet-American relations came in 1988 when Gorbachev made a positive impression when he entered a crowd of spectators in New York City to shake hands with people. In May and June of the same year, President Reagan visited Moscow.

Within the Soviet Union, Gorbachev promoted great political changes. His most important measure came in 1989 when he set up elections in which members of the Communist Party had to compete against opponents who were not party members. Later that same year, he called for an end to the special status of the Communist Party guaranteed by the Soviet Constitution. He also ended the Soviet military occupation of Afghanistan.

Two issues, however, caused growing difficulty for Gorbachev. First, there was the problem of nationalities, as the Soviet Union consisted of nearly one hundred different ethnic groups. Many of these groups began to engage in open warfare against each other and even more serious, some ethnic groups, like the Lithuanians and the Ukrainians began to call for outright independence. Second, the country's economy was sinking deeper into crisis. Both industrial and agricultural production were declining, and the old system, in which the economy ran under centralized control of the government, no longer seemed to work.

While Gorbachev wrestled with these problems, a powerful rival began to emerge. Once considered an ally, Boris Yeltsin (1931–) became the country's leading supporter of radical economic reform (improvement). Yeltsin formally left the Communist Party in 1990, something Gorbachev refused to do, and was elected president of the Russian Republic in June 1991. Gorbachev, on the other hand, had been made president of the Soviet Union without having to win a national election. Thus, Yeltsin could claim a greater degree of popular support.

In August 1991 a group of Communist Party conservatives captured Gorbachev while he was on vacation in the Crimea and moved to seize power. Some of these men, like Prime Minister Valentin Pavlov, were individuals Gorbachev had put in power to balance opposing political forces. But Yeltsin, not Gorbachev, led the successful resistance to the coup (takeover of the government), which collapsed within a few days. When Gorbachev returned to Moscow, he was overshadowed by Yeltsin, and there were rumors that Gorbachev himself had been involved in the coup.

By the end of 1991, the Soviet Union had fallen apart. The Ukraine and the Baltic states declared themselves as independent, and real power began to shift towards the leaders of those regions, among them Yeltsin, hero of the attempted coup and president of the Russian Republic. Gorbachev formally resigned his remaining political office on Christmas Day 1991.

In the spring of 1995, Gorbachev began touring factories in Russia, spoke to university students, and criticized President Yeltsin. He stopped just short of formally announcing his candidacy for the presidency in 1996. He wrote an autobiography, which was released in 1995 in Germany and in 1997 in the United States. Gorbachev's wife, Raisa, died of cancer in September of 1999.

On May 25, 2000, Gorbachev registered his Russian Social Democratic Party, saying he wanted to support liberal ideas. The party's registration by the Justice Ministry paved the way for it to contest future polls.

Like many historical figures, Gorbachev's role will be interpreted in varying ways. While a Russian factory worker stated in Newsweek, "He destroyed a great state … the collapse of the Soviet Union started with Gorbachev," some critics in the West saw the fall of Communism as "altogether a victory for common sense, reason, democracy and common human values."

This is no doubt a well documented biography of the well respected, ideological former president of the Soviet Union. But it would have been more appreciated if his childhood days were inclusive so as to make it more comprehensive. But nevertheless, it was a well done job. Thanks.
2
Avrom

The Encyclopedia of World Biography has traced Mikhail Gorbachev's leadership in domestic and international community. Yet, it has not considered Gorbachev's policies of glasnost and perestroika, - two terms with which every high school sophomore is/should be familiar.

By the way, in paragraph two of the section entitled, "Climbing the Party Ladder," an error is present: "In 1978, at the request of Brezhnez [...]." "Brezhnez" should be read as "Brezhnev."