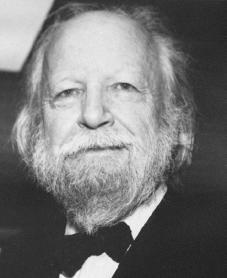 William Golding.
Courtesy of the
Library of Congress
.

The winner of the 1983 Nobel Prize in Literature, William Golding is among the most popular and influential British authors to have emerged in the second half of the twentieth century. Golding's reputation rests primarily upon his first novel, Lord of the Flies (1954), which is consistently regarded as an effective and disturbing portrayal of the fragility of civilization.

Golding was born in Saint Columb Minor in Cornwall, England, in 1911. His father, Alex, was a schoolmaster, while his mother, Mildred, was active in the Women's Suffrage Movement (the movement for women's right to vote). As a boy, his favorite authors included H. G. Wells (1866–1946), Jules Verne (1828–1905), and Edgar Rice Burroughs (1875–1950). Since the age of seven, Golding had been writing stories, and at the age of twelve he attempted to write a novel.

After graduating from Oxford in 1935, Golding continued the family tradition by becoming a schoolmaster in Salisbury, Wiltshire. His teaching career was interrupted in 1940, however, with the outbreak of World War II (1939–45). Lieutenant Golding served five years in the British Royal Navy and saw active duty in the North Atlantic, commanding a rocket launching craft.

Lord of the Flies

Golding had enhanced his knowledge of Greek history and mythology by reading while at sea, and when he returned to his post at Bishop Wordsworth's School in 1945, he began furthering his writing career. He wrote three novels, all of which went unpublished. But his frustration would not last long, when, in 1954, Golding created The Lord of the Flies. The novel was rejected by twenty-one publishers before Faber & Faber accepted the forty-three-year-old schoolmaster's book.

Initially, the tale of a group of schoolboys stranded on an island during their escape from war received mixed reviews and sold only modestly in its hardcover edition. But when the paperback edition was published in 1959, thus making the book more accessible to students, the novel began to sell briskly. Teachers, aware of the student interest and impressed by the strong theme and symbolism of the work, began assigning Lord of the Flies to their literature classes. As the novel's reputation grew, critics reacted by drawing scholarly reviews out of what was previously dismissed as just another adventure story.

The author's extremely productive output—five novels in ten years—and the high quality of his work established him as one of the late twentieth-century's most distinguished writers. This view of Golding was cemented in 1965, when the author was named a Commander of the British Empire.

After the success of Lord of the Flies, Golding enjoyed success with other novels, including Pincher Martin (1957), Free Fall (1959), and The Pyramid (1967). The author's creative output then dropped drastically. He produced no novels and only a handful of novellas (short novels), short stories, and other occasional pieces.

In 1979 Golding returned with the publi cation of Darkness Visible which received mixed reviews. The author faced his harshest criticism to date with the publication of his 1984 novel The Paper Men, a drama about an aging, suc cessful novelist's conflicts with his pushy, over-bearing biographer. Departing briefly from fic tion, Golding wrote a book containing essays, reviews, and lectures. A Moving Target appeared in 1982, one year prior to the author's receipt of the Nobel Prize in Literature.

William Golding died in England in 1993. A year after his death, The Double Tongue was released, published from a manu script Golding completed before he died.

I was shocked at the degradation of this author's book. The vileness of children killing each other and having sex with a hog, is not my idea of fit literature for any person to read, much less junior high students. my granddaughter was given the assignment of reading "The Lord of The Flies" and "Farenheit 451", both of which I considered the scrapings of the trash pile. I bought two copies of each book before I knew what they consist of because I wanted to help my granddaughter with her assignment over the summer. Then my daughter, her mother tells me even the child refuses to read the book. That should tell you something. How did this garbage get introduced as great literature? I read an article on the Internet where Golding himself commented twenty years after writing the novel that he never should have written it. He had some really negative things to say about the book. Sincerely, Ms Kidwell
3
Lambert

Lord of the Flies is considered classic literature because it dared to go where other novels were to scared to venture. I can see why you would be angry a Junior High student had to read the book as I think it is High School level however it is most definitely not the "scrapings of the trash pile". The book speaks to the savagery of mankind as a whole and the struggles children would face if they were left on an island alone. Have you thought about the fact that maybe your granddaughter refused to read it because she was lazy? One last note, could you point me to the part where they have "sex with a hog" I don't remember that in the novel. Thanks,
Lambert
4
Jacy

I'm currently a highschool student, and my English class had to read Lord of The Flies as an assignment. This book must have been the best book anyone in our class has ever read. This book is definitlery not trash, plus no child had sex with a hog in this book. That is complete rubbish. Lord of The Flies is intelligent, and written in depth to the point where you're sucked into the journey these boys must live through. It is definitley worth reading.
5
Mrs. Gribble

As a junior high teacher of eighth grade Advanced Literature students, I am compelled to respond to the comments about William Golding's "Lord of the Flies," particularly those of Ms. Kidwell. I have my advanced students read this novel every school year because they are capable of high school level work, and they need to learn to handle the intricacies of this book with regard to the beautiful imagery and other figurative language it contains, as well as the more mature concepts of how easily society can break down and reduce itself to savagery. Nowhere in this book do any of the boys on the island have "sex with a hog." Some of the boys are indeed killed by other boys, but Golding portrays this violence through the eyes of the boys and their child-like inability to deal with emotional complexities of these murders. To the credit of my students, many of whom are exposed unrelentingly and too early to violence in movies, video games, and television programs, most react with horror and shock to these killings and struggle to understand the motives of the boys who commit murder. To Lambert and Jacy, I applaud your defense of this classic novel, for it is truly students such as yourselves who encourage teachers to keep this book on their English class reading lists. Thank you for speaking up. You are an inspiration.