The French painter and sculptor Paul Gauguin sought exotic environments, first in France and later in Tahiti. He frequently combined the people and objects in his paintings in novel ways, bringing to mind a mysterious, personal world in the process.

Paul Gauguin was born in Paris, France, on June 7, 1848, to a French father, a journalist from Orléans, and a mother of Spanish Peruvian descent. When Paul was three his parents sailed for Lima, Peru, after the victory of Louis Napoleon (1769–1821). His father died during the trip. Gauguin and his mother remained in Lima for four years. There the young Gauguin lived a comfortable life. Gauguin then returned to Orléans, and eventually found his way back to Paris. Next he attended a seminary (a school for religious studies). At the age of seventeen he enlisted in the merchant marine (people who work on commercial ships). In 1870 Gauguin began a career as a stockbroker (a person who buys and sells shares of companies) and remained in this profession for twelve years. He married a Danish girl, Mette Sophia Gad, and seemed destined for a comfortable middle-class existence.

Beginnings as an artist

Gauguin's hobby was painting, which he pursued enthusiastically. The Salon of 1876 accepted one of his pictures, and he started a collection of works by impressionist painters. The impressionists were a group of painters who concentrated on the general impression produced by a scene or object. They used unmixed primary colors and small strokes to simulate actual reflected light. As time went on, Gauguin's desire to paint became ever stronger. In 1883 Gauguin, now thirty-five, decided to give up business and devote himself entirely to painting. His wife took their five children to live with her parents in Copenhagen, Denmark. Gauguin followed her, but he soon returned with his eldest son, Clovis, to Paris. There he supported himself by pasting advertisements on walls.

In 1886, with Clovis enrolled in a boarding school, Gauguin lived for a few months in the village of Pont-Aven in the Brittany region of northwestern France. He then left for the island of Martinique, first stopping to work as a laborer on the Panama Canal. He returned to Pont-Aven in February 1888 and gathered about him a group of painters. Gauguin preached and practiced a style he called synthetism, which involved pure color patterns, strong, expressive outlines, and flat planes. The painters admired the local people for their simple lives and deep religious faith. They felt these qualities reflected a truth about humanity's basic nature, which was not reflected in the sophisticated world of Paris. 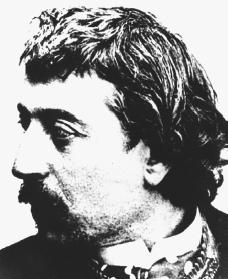 Paul Gauguin.
Reproduced by permission of the
Corbis Corporation
.
Christ (1889). In both paintings Breton (residents of Brittany) peasants (farm laborers) are strong elements. In both paintings one sees Gauguin's usual bright colors and simplified shapes, which he treated as flat silhouettes. These paintings also show his use of symbolism (using one thing to represent another). Objects and events are taken out of their normal historical contexts.

In Vision after the Sermon, Breton women observe Jacob wrestling with a stranger who turns out to be an angel. This is an episode described in the book of Genesis in the Bible. Gauguin is saying that the faith of these women enabled them to see miraculous events of the past as vividly as if they were occurring before them. In the Yellow Christ Gauguin used a yellow, wooden statue from a church near Pont-Aven as his model. He depicts Breton women as if they were in the presence of the actual death of Jesus Christ.

In October 1888 Dutch painter Vincent van Gogh (1853–1890) invited Gauguin to join him at Arles, France. Gauguin was a proud, arrogant, sarcastic, and sophisticated person. Van Gogh was open and strongly needed human companionship. They did not get along and Gauguin returned to Paris. There he resumed his bohemian (nontraditional and artistic) existence until 1891, when he left France and the Western (characterized by European and American ideals) civilization he had come to dislike and went to Tahiti.

Gauguin embodied the dissatisfaction with bourgeois (middle-class) Parisian existence felt by several postimpressionist painters. He achieved what was perhaps the most extreme break with that society when he left Europe for a non-Western culture. When Gauguin arrived in Tahiti, he did not settle in the capital, Papeete, because Europeans lived there. Instead, he lived with the natives some twenty-five miles away. He perceived Tahiti as a land of beautiful and strong people, who were unspoiled by Western civilization. He enjoyed the bright, warm colors there.

Gauguin became ill and returned to France in August 1893. There he found that he had inherited a small sum of money from an uncle. In Paris he lived with flair. An exhibition of his Tahitian work in November was not successful financially. In early 1894 he went to Denmark and then to Brittany.

Gauguin's Tahitian paintings celebrate the lushness and mysterious splendor of his new environment. At the same time they are seldom pictures of actual Tahitian life. They contain combinations of objects and persons taken out of their normal settings, as did several of his paintings done in Brittany. In La Orana Maria (1891) a Tahitian woman, her young son, and two women standing nearby are shown in the obvious poses of the Virgin Mary and the Christ child with attendant saints or worshiping angels. In Where Do We Come From? What Are We? Where Are We Going? (1898) Tahitian natives are portrayed in unusual and probably preplanned meditative poses with a foreboding (giving a warning) primitive idol.

In 1895 an unsuccessful auction of Gauguin's paintings was held. He sailed for Tahiti that spring. He once again settled among the natives. His health grew poorer. An ankle he had broken in Brittany did not heal properly, and he suffered from strokes. The government authorities, for whom he showed contempt, harassed him. However, he had to depend on them for menial jobs (work that is beneath a person's skills) in order to support himself. In 1901 he moved to the Marquesas Islands. He died there, alone, of a stroke on May 8, 1903.

Gauguin is regarded today as a highly influential founder of modern art. He focused on color and line, and often created a profound sense of mystery in his work. His unusual combinations of objects and people can be seen as forerunners of the surrealist (using fantastic imagery) art of the 1920s and later.