Marcus Garvey, a black man from the West Indies, was the first to forcefully speak about the concept of African nationalism—of black people returning to Africa, the continent of their forefathers, in order to build a great nation of their own. His writings and ideas would inspire many leaders of the civil rights movement during the second half of the twentieth century.

Marcus Mosiah Garvey was born in St. Ann's Bay, Jamaica, on August 17, 1887, the youngest child of a stonemason (one who prepares stones for building). He went to the local elementary school, and at the age of fourteen became an apprentice (working to gain experience) in the printing trade. In 1903 he went to the capital, Kingston, to work as a printer. He soon became involved in public activities and helped form the Printers Union, the first trade union in Jamaica. In 1907 he took part in the unsuccessful printers strike, where organized workers refused to work unless certain demands were met. This experience influenced the young Garvey in both his political and journalistic passions. He soon began publishing a periodical called the Watchman.

In 1910 Garvey began a series of travels that transformed him from an average person concerned about the problems of those with less opportunity, to an African nationalist determined to lift an entire race from bondage. He visited Costa Rica, Panama, and Ecuador, and worked as an editor for several radical newspapers. After briefly returning home, he proceeded to England, where contacts with African nationalists stimulated in him a keen interest in Africa and in black history. In each country he visited, he noted that the black man was in an inferior position, subject to the ever-changing ideals of stronger races. His reading of Booker T. Washington's (1856–1915) "Up from Slavery" at this time had a great effect upon him. Also at this time Garvey met Duse Mohammed Ali, a Sudanese-Egyptian and strong supporter of African self-rule. Garvey began writing for Ali's small magazines and was introduced to other black activists.

On his return to Jamaica in 1914 from England, Garvey formed the Universal Negro Improvement Association and African Communities League (UNIA-ACL). These organizations were intended "to work for the general uplift of the Negro peoples of the world," and would become the centerpiece for his life's work.

In 1916 Garvey went to the United States to raise funds to carry on the work of his Jamaican organizations. He was immediately caught up in the unrest of the times, and his voice thundered in the evenings on the streets of Harlem in New York City, New York. A New York branch of the UNIA was established, soon followed by branches in 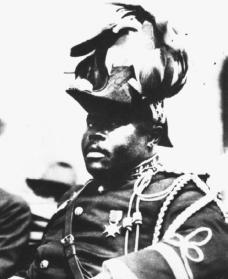 Marcus Garvey.
other cities in the United States, in Central and South America, and in the Caribbean. The expansion of the UNIA was publicized by its official voice, Negro World, a newspaper published in English, Spanish, and French. Published in New York City from 1918 to 1933, the magazine was succeeded by the monthly Black Man, which ran through the 1930s, published after 1934 in London.

Negro World reached out to black communities all over the world. It even penetrated into the interior of Africa, even though the white rulers there had banned it. Garvey stressed the need for blacks to return to Africa for the building of a great nation, but he realized that until this was accomplished, Africans needed to make themselves economically independent wherever they lived. He encouraged black people to start their own businesses—to take the business of their ghettos into their own hands.

Together with the American clergyman Archbishop George A. McGuire (1866–1934), Garvey formed the African Orthodox Church. This was in accordance with one of his basic principles, for he believed that each race must see God through its own racial eyes. The Black Christ and the Black Madonna were officially announced at the UNIA convention of 1924.

The Black Star Line shipping company and the Negro Factories Corporation were to be the commercial strengths of the Garvey movement. But it was the failure of the shipping venture that gave Garvey's enemies the opportunity to destroy him. Investments in the shipping line were lost, and in 1925 Garvey was imprisoned in the United States. After serving two years and ten months of a five-year sentence, he was deported, or forced out of the country, to Jamaica.

Previously, his plans for colonization in Liberia had been ruined by the colonial powers that brought pressure to bear on the Liberian government. As a result, the land that had been granted to the Garvey organization for the settlement of overseas Africans was given to the white American industrialist Harvey Firestone (1863–1938). And the expensive equipment shipped to Liberia for the use of Garvey's colonists was seized.

In Jamaica, Garvey attempted to enter local politics, but restrictions at the time did not allow the vote to the black masses. He went to England and continued his work of social protest and his call for the liberation (freeing) of Africa. He died in London on June 10, 1940. Marcus Garvey was married twice. His second wife, Amy Jacques, whom he married in 1922, bore him two sons.

The Garvey movement was the greatest international movement of African peoples in modern times. At its peak, from 1922 to 1924, the movement counted more than eight million followers. The youngest members of the movement were taken in at five years of age and, as they grew older, they graduated to the sections for older children.

Garvey emphasized the belief in the One God, the God of Africa, who should be visualized through black eyes. He preached to black people to become familiar with their ancient history and their rich cultural heritage. He called for pride in the black race—for example, he made black dolls for black children. His was the first voice to clearly demand black power. It was he who said, "A race without authority and power is a race without respect."

In emphasizing the need to have separate black institutions under black leadership, Garvey anticipated the mood and thinking of the future black nationalists by nearly fifty years. He died, as he lived, an unbending leader of African nationalism. The symbols which he made famous, the black star of Africa and the red, black, and green flag of African liberation, continued to inspire younger generations of African nationalists.

Great Work and great BLACK PRIDE. Hurray I love this article. IT is so beautiful about what Marcus Garvey Did. He is the best and I thank God for him. Marcus Garvey is a BLACK KING.
2
curtis

keep up the good work and also good info.this info has helped me in studies and also my projects
4
james jones

After reading your article, I see where many of our past leaders got lots of their ideals and motivation from.