Betty Friedan is a leader of the feminist (women's rights) movement, author of The Feminine Mystique, and a founding member of the National Organization for Women (NOW), the National Abortion Rights Action League (an organization that supports a woman's right to end a pregnancy), and the National Women's Political Caucus. She helped spark the women's movement in the 1960s.

Betty Naomi Goldstein was born on February 4, 1921 in Peoria, Illinois, the first of Harry and Miriam (Horwitz) Goldstein's three children. Her father worked his way up to become the owner of a jewelry store; her mother had to give up her job on a newspaper when she married. The loss of that career affected her mother deeply, and she urged young Betty to pursue the career in journalism that she herself was never able to achieve.

Betty went on to graduate from Smith College in 1942. She then studied psychology as a graduate student at the University of California at Berkeley. Like her mother, she did some work as a journalist, but unlike her mother she did not end her career to build a family. She married Carl Friedan in 1947, and during the years that she was raising their three children she continued to write articles. After her husband established his own advertising agency, the family moved to the suburbs. Although she continued to write, she felt unfulfilled by her role as wife and mother.

Others feel the same way

In 1957 Friedan put together a list of questions to send to her Smith College classmates fifteen years after graduation. She received detailed replies from two hundred women, many of which revealed that these women were also unhappy with their lives. Friedan wrote an article based on her findings, but the editors of the women's magazines with whom she had previously worked refused to publish it. Those refusals only made her more determined to share her findings with the world. She decided to investigate the problem on a much larger scale and publish a book. 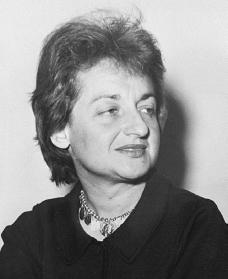 Betty Friedan.
Courtesy of the
Library of Congress
.
The result of her effort was The Feminine Mystique, which became an instant success, selling over three million copies.

Friedan began her book by describing what she called "the problem that has no name." In words that touched a nerve in thousands of middle-class American women, she wrote, "the problem lay buried, unspoken, for many years in the minds of American women. It was a strange stirring, a sense of dissatisfaction, a yearning [that is, a longing] that women suffered in the middle of the 20th century in the United States. Each suburban wife struggled with it alone. As she made the beds, shopped for groceries … she was afraid to ask even of herself the silent question—'Is this all?'" Attacking the notion that "biology is destiny," under which women were expected to devote their lives to being wives and mothers and give up all other pursuits, Friedan called upon women to do whatever it took to discover other meaningful activities.

In 1966, three years after the book's publication, Friedan helped found the first major organization established since the 1920s devoted to women's rights. The organization was called the National Organization for Women (NOW), and Freidan became its first president. Under Friedan's leadership NOW worked for political reforms to secure legal equality for women. The organization was successful in achieving a number of important gains. It worked for the enforcement of Title VII of the 1964 Civil Rights Act, which prevented employers from discriminating (denying opportunities to or providing unequal treatment to) against workers on the basis of sex. As a result of the organization's efforts, the Equal Opportunities Commission ruled that airlines could not fire female flight attendants because they married or reached the age of thirty-five and that job opportunities could not be advertised as only for male or female applicants.

NOW also lobbied for passage of the Equal Rights Amendment (ERA), which had been introduced in Congress by Alice Paul (1885–1977) in 1923 but had never passed. In addition, the organization called for government-funded day-care centers to be established "on the same basis as parks, libraries and public schools." NOW also worked to make abortion (a woman's right to end a pregnancy) legal and to preserve abortion rights. Friedan was among the founders of the National Abortion Rights Action League in 1969. Finally, in 1973, the Supreme Court legalized abortion.

In 1970 President Richard Nixon (1913–1994) chose G. Harrold Carswell (1919–) to sit on the Supreme Court. Friedan made a strong stand against the president's choice. She argued that Carswell had defied the Civil Rights Act by ruling that employers had the right to deny jobs to women who had children. Carswell's appointment did not go through. That same year, at the annual meeting of NOW, Friedan called for a Women's Strike for Equality, which was held on August 26—the fiftieth anniversary of the day women gained the right to vote. Women across the country marked the day with demonstrations, marches, and speeches in forty major cities. Friedan led a parade of over ten thousand down Fifth Avenue in New York City. The following year Friedan was among the leaders who formed the National Women's Political Caucus.

Still an important voice for women

As the women's movement grew and new leaders emerged with different concerns, Friedan's popularity decreased. Still, she remained an outspoken leader for many years. In 1974 she had an audience with Pope Paul VI in which she urged the Catholic Church to "come to terms with the full personhood of women." In 1977 she participated in the National Conference of Women in Houston, Texas, calling for an end to divisions in the movement and the creation of a new coalition (alliance) of women. Friedan continued writing, teaching, and speaking throughout these years. In 1976 she published It Changed My Life: Writings on the Women's Movement, which was followed by her 1981 book, The Second Stage. In that publication Friedan called for a shift in the feminist movement, one that would address the needs of families and would allow both men and women to break free of the roles they had been pressured to fill in the past.

Friedan remains an important voice in women's struggle for equality. Also, in 1993, she wrote The Fountain of Age, turning her attention to the rights of the elderly and aging. In the New York Times she said, "Once you break through the mystique [air of mystery] of age and that view of the aged as objects of care and as problems for society, you can look at the reality of the new years of human life open to us." Betty Friedan's genuine interest in helping others improve and enjoy their lives is as strong today as it was when she first began writing.