Ella Fitzgerald was one of the most exciting jazz singers of her time and, because of the naturalness of her style, had a popular appeal that extended far beyond the borders of jazz.

Ella Fitzgerald was born on April 25, 1918, in Newport News, Virginia, but she spent her youth just outside New York City in Yonkers, New York, and received her musical education in public schools. During elementary school she began singing at her local church, the Bethany African Methodist Episcopal Church. At fifteen her mother died and she was cared for by her aunt in Harlem, a black neighborhood in New York that was rich with jazz music.

When only sixteen, she received her first big break at the Apollo Theater in Harlem, when she won an amateur-night contest and impressed saxophonist-bandleader Benny Carter (1907–). He recommended her to drummer-bandleader Chick Webb (c. 1900–1939), who hired her in 1935. She soon became a recording star with the band, and her own composition "A-tisket, A-tasket" (1938) was such a smash hit that the song became her trademark for many years thereafter. When Webb died in 1939, Fitzgerald assumed leadership of the band for the next year.

"The First Lady of Song"

By 1940 Fitzgerald was recognized throughout the music world as a vocal wonder—a singer with clarity of tone, flexibility of range, fluency of rhythm, and, above all, a talent for improvisation (to make up without practice) that was equally effective on ballads and faster tunes. Although for a long time she had a better reputation among fellow musicians than with the general public, this changed soon after she joined Norman Granz's Jazz at the Philharmonic (JATP) in 1946. She made annual tours with the group and was always the concert favorite. Three of her unfailing show-stoppers were "Oh, Lady Be Good," "Stomping at the Savoy," and "How High the Moon." Each would begin at a medium tempo and then speed up as Fitzgerald moved up-tempo and "scatted" (that is, sang harmonic variations of the melody in nonsense syllables). The huge JATP crowds always responded well.

By the early 1950s Fitzgerald's domination of fans's and critics's polls was absolute. In fact, she won the Down Beat readers' poll every year from 1953 to 1970 and became known as "The First Lady of Song." In 1955 she ended her twenty-year recording relationship with Decca in order to record for Norman Granz's Verve label. She proceeded to produce a series of legendary "Songbook" albums, each devoted to the compositions of a great songwriter or songwriting team, such as the Gershwins (George, 1898–1937; Ira, 1896–1983), Cole Porter (1891–1964), Irving Berlin (1888–1989), and Duke Ellington (1899–1974). The lush orchestrations allowed Fitzgerald to display the classy popsinger side of herself. In the two-volume Ellington set, her jazzier self moved aside for the melodist in her.

Under Granz's personal management Fitzgerald also began to play choice hotel jobs and made her first feature film appearance in Pete Kelly's Blues (1955). In 1957 she worked at the Copacabana in New York City and gave concerts at the Hollywood Bowl. In 1958, in the company of the Duke Ellington Orchestra, she gave a concert at Carnegie Hall as part of an extended European and United States tour with the band. In the early 1960s she continued to work the big hotel circuit—the Flamingo in Las Vegas, the Fairmont Hotel in San Francisco, and the Americana in New York City. She also continued to tour Europe, Latin America, and Japan with the Oscar Peterson (1925–) trio, which was three-fourths of Granz's JATP house rhythm section. In 1965 and 1966 she was reunited with Ellington for another tour and record date.

Fitzgerald was always blessed with superb musicians accompanying her, from the full orchestral support of Chick Webb and Duke Ellington to the smaller JATP ensembles. In 1968 she teamed up with yet another, the magnificent pianist Tommy Flanagan, who headed a trio that served her into the mid-1970s. In 1971 Fitzgerald had serious eye surgery, but within a year she was performing again. Her singing, however, began to show evidence of decline: the voice that was once an instrument of natural beauty and effortless grace became a bit thin and strained. Nevertheless, so great was her talent that she continued to excite concert audiences and to record effectively. She appeared after the mid-1960s with over fifty symphonic orchestras in the United States.

A large, pleasant-looking woman with a surprisingly girlish speaking voice, Ella Fitzgerald sometimes forgot lyrics. But the audiences loved it and delighted in her ability to work her way out of these potentially embarrassing moments on stage. Unlike some other great jazz singers, like Billie Holiday (1915–1959) and Anita O'Day, Fitzgerald avoided falling into drug addiction. She was married twice. The first marriage, to Bernie Kornegay in 1941, was annulled 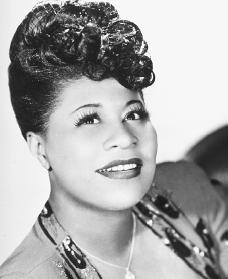 Ella Fitzgerald.
Reproduced by permission of
Archive Photos, Inc.
(made invalid) two years later. The second, to bassist Ray Brown (1926–) in 1948, ended in divorce in 1952 (they had one son).

The legacy of Ella

Was Ella Fitzgerald essentially a jazz singer or a pop singer? Jazz purists say that she was often glossy and predictable and that she lacked the emotional depth of Billie Holiday, the imagination of Sarah Vaughan (1924–1990) or Anita O'Day, and the blues-based power of Dinah Washington (1924–1963). The criticisms sprang partly from her "crossover" popularity and ignored her obvious strengths and contributions: Fitzgerald was not only one of the pioneers of scat singing, but, beyond that, she was a down-to-earth singer whose harmonic variations were always unforced. Plus, she was a supreme melodist who never let herself get in the way of any song she sang.

Fitzgerald died on June 15, 1996, at the age of seventy-eight. She left a legacy that will not soon be forgotten. In her lifetime she was honored with fourteen Grammys, the Kennedy Center Award, as well as an honorary doctorate in music from Yale University. In 1992 President George Bush (1924–) honored her with the National Medal of Freedom. Fitzgerald's impressive financial estate was left in a trust, including the $2.5 million in proceeds from the sale of her Beverly Hills home.

it needs more information on her childhood nand the rest of her life.
2
denford

this woman was amazing .May God rest her soul in peace
3
pam

This article gave me lots of info about Ella, thanx to whomever wrote this she was a legend and may she be rested n peace by the lord almighty himself.
5
beth

IT WAS OK AND THAT IS GOOD BECAUSE I AM DOING A REPORT ON ELLA.