Dianne Feinstein was elected San Francisco's first female mayor in 1979 and became one of the nation's most visible and recognized leaders. In 1992, when she was elected to the Senate, she and Barbara Boxer became the first female senators from California.

Dianne Feinstein was born in San Francisco, California, on June 22, 1933, to a Jewish physician father, Leon Goldman, and a Catholic Russian-American mother, Betty Rosenburg Goldman. She attended a Roman Catholic school and a Jewish temple (a place for religious worship) during her youth, which resulted in her deep respect for different religions. Feinstein was introduced to politics by an uncle who began taking her to San Francisco Board of Supervisors (city council) meetings when she was sixteen. She recalled later that this was the main factor in her decision to pursue a career in public service. After graduating from San Francisco's Sacred Heart High School, she attended Stanford University. She studied history and political science and was also active in student government. She received her bachelor's degree in 1955.

In 1956 Feinstein married Jack Berman, a man who would eventually become a San Francisco superior court judge. The couple had one daughter. Combining marriage and family with a career, Feinstein was employed by a public affairs group that was interested in criminal justice. She went on to work for California's Industrial Welfare Commission and was appointed in 1962 to a four-year term on the state's Women's Board of Paroles. When her first marriage ended in divorce, she withdrew from public life for a time but came back as a member of San Francisco's Mayor's Commission on Crime. She then married Bertram Feinstein, a noted surgeon. 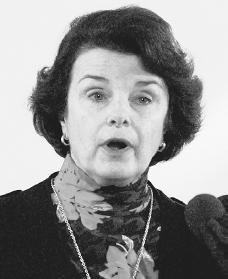 Feinstein won election to San Francisco's Board of Supervisors in 1969 and served on the board through the 1970s. She also ran for mayor twice, losing to Joseph Alioto (c. 1917–1998) in 1971 and finishing a poor third to George Moscone (1929–1978) in the 1975 election. She was an early and firm supporter of presidential candidate Jimmy Carter (1924–). When he entered the White House, she tried without success to obtain a cabinet post in Washington, D.C. Turned down in her attempt for higher office, weakened by illness from foreign travel, and discouraged by the deaths of her father and her second husband, Feinstein told writer Jerome Brondfield: "I decided I would not again be a candidate—for anything."

Feinstein then decided to make the announcement that her political career was over. However, half an hour before the press conference on November 27, 1978, where she planned to make her decision public, a former supervisor, Dan White, fatally shot Mayor George Moscone (1929–1978) and Supervisor Harvey Milk (1930–1978). These murders forced Feinstein into the position of acting mayor. A month later she was selected to serve out the balance of Moscone's term. As mayor, Feinstein attempted to calm the political unrest and violence, balance the demands of different groups, and help the city recover from the tragic events that had put her in office.

Feinstein was elected to a full four-year term as mayor beginning in 1979. During her early years on the job she tried to please all the different groups in the San Francisco community. She took an interest in police staffing and policies and succeeded in reducing crime rates. The biggest challenge that she faced was fiscal (involving money)—the problem of balancing the budget in the face of cutbacks in state and federal spending for cities. Making use of the knowledge of the high-powered business and labor leaders on her Fiscal Advisory Committee, she brought the city budget under control, introduced improved management policies, and promoted downtown development and expansion. Feinstein was a colorful and energetic mayor. She once appeared at a ribbon-cutting ceremony for a construction project dressed in an old-fashioned, black wool, knee-length bathing suit—which she wore after losing a bet with the contractor. At a dinner at which she was guest of honor, she applied the Heimlich maneuver to save a guest from choking on a piece of meat.

Although her career as mayor was marked by many successes, Feinstein occasionally stumbled. When she pushed through a law banning handguns, some voters attempted a recall (a process in which people vote to remove an elected official from office). Many members of the community were also angered by her veto (rejection) of a measure that would have extended medical and welfare benefits to partners in same-sex couples and to live-in companions of unmarried city employees. Although the recall movement gathered many signatures, Mayor Feinstein survived the challenge by receiving an 83-percent-favorable vote in April 1983. She went on to win her second and last full term in the November 1983 election (according to a city rule, mayors were limited to two terms). In 1984 San Francisco hosted the Democratic National Convention, which many of the mayor's backers hoped might lead to her nomination for the vice presidency, but she was not chosen.

In 1990 Feinstein ran for governor of California against Republican candidate Pete Wilson (1933–). Although she ran a tough campaign that was well funded by her third husband, investment banker Richard Blum, she lost to Wilson by a narrow margin. She immediately changed her focus and in early 1991 announced her intention to run for Wilson's former Senate seat in the 1992 election. Along with fellow Democrat Barbara Boxer (1940–), Feinstein was elected to the Senate in 1992; the two became the first women senators ever elected in California. Their election was part of a new women's revolution, since prior to January 1993 only fifteen women had ever served in the Senate. There had never been more than two serving at any given time. After her reelection in 1996, Feinstein shared the floor with eight fellow women senators, all representing a wide range of viewpoints. Of the change, Senator Tom Harkin (1939–) said, "Just by being on the Senate floor, they've changed the male mindset."

In the Senate, Feinstein took a firm stand on a range of issues. She was outspoken against the decision of President Bill Clinton (1946–) to make Mexico a U.S. ally in the fight against illegal drugs. In foreign affairs, she argued that China should be granted "most favored nation" standing in trade (meaning that China would be guaranteed the best possible terms, including the lowest import taxes, when trading with the United States). She also disagreed with the leasing of a former Navy base to China's government-owned shipping company. Concerning the protection of privacy rights in the United States, she proposed a law in 1998 to limit the access of paparazzi (photographers who follow famous people around in attempt to take pictures of them for sale to publications) in California.

In 2000 Feinstein received a special recognition award from the Susan G. Komen Breast Cancer Foundation for her work in support of breast cancer research and education. At the time, she was a member of the Senate Cancer Coalition and the National Dialogue on Cancer. She also supported a stamp to raise money specifically for breast cancer research.

Feinstein continues to be an active senator who supports the many issues that have become important to her during her decades-long career in public service. She has introduced bills to make the cloning (scientific copying) of another human being a crime, to allow local school districts to use Department of Education funding to build new and smaller schools, and to make it more difficult for terrorists to obtain weapons from the United States.

Mikulski, Barbara, and Catherine Whitney. Nine and Counting: The Women of the Senate. New York: Morrow, 2000.

Diane Feinstein's life is a lie She is not Jewish. Her mother wasnt Jewish, nor did she undergo a conversion.. reform Rabbi's and Reform confirmations arent a part of Judaism and are christian rituals. Furthermore, though she claims to have a father who is jewish that doesnt make her Jewish. Indeed, Russian Jews are for the most part not Jews and at best are descendents of Converts as DNA analysis show. Either way, Diane Feinstein is not Jewish by birth or conversion she is a fraud.
4
Carolyn Franklin

She never said she was Jewish. She made it clear she accepted both religions as valuable to HER. Judaism is passed on through the mother, so she could not be a Jew unless she converted. The point is, she is an extraordinary woman. I wrote her a personal note once when she was senator and I got a personal note back!! How good is that!! I love that woman!!