The Greek mathematician (math expert) Euclid wrote the Elements, a thirteen-volume set of textbooks of geometry (the study of points, lines, angles, and surfaces)—the oldest major mathematical work existing in the Western world.

Almost nothing is known of Euclid personally. It is not even known for certain whether he was really a creative mathematician or was simply good at collecting and editing the work of others. Most of the information about Euclid comes from Proclus (411–485 C. E.), a fifth-century Greek scholar. Some believed Euclid was the son of a Greek man who was born in Tyre and lived in Damascus. His mathematical education may have been obtained from students of Plato (c. 427 B.C.E. –347 B.C.E. ) in Athens, Greece, since most of the earlier mathematicians upon whose work the Elements is based had studied and taught there.

No earlier writings similar to the Elements have survived. One reason is that the Elements expanded on all previous writings of this type, so keeping any earlier texts around was thought to be unnecessary. For example, about 600 B.C.E. the Greek mathematician Thales (c. 625–c. 546 B.C.E. ) is said to have discovered a number of theorems (statements that can be demonstrated or proved) that appear in the Elements. Early mathematics dealt only with concrete problems, such as determining areas and volumes. By Euclid's time, mathematics had become more of an intellectual occupation for philosophers (thinkers, or seekers of wisdom) rather than for only scientists.

The Elements consists of thirteen books. Each book contains a number of theorems, from about ten to one hundred, which follow a series of definitions. The usual elementary course in Euclidean geometry is based on "Book I." "Book V" is one of the finest works in Greek mathematics, a masterful description of the theory of proportions (the relation of one part to another part or the sum of all parts) originally discovered by Eudoxus. "Book VI" applies the statements of "Book V" to the figures of plane geometry (the study of flat surfaces and the relationships of figures lying within the surfaces). In "Book VII" a prime number is defined as that which is measured by a unit alone (a prime number can be divided only by itself and the number 1). "Book IX" contains Euclid's proof that there are infinitely many prime numbers, which is still used in current algebra textbooks.

The Elements were translated into Latin and Arabic, but it was not until the first printed edition, published in 1482, that they became important in European education. The first complete English version was printed in 1570. It was during the most active mathematical period in England, about 1700, that Greek mathematics was studied most closely. Euclid's writings were used by 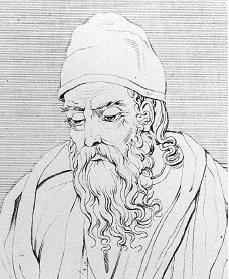 Euclid.
Courtesy of the
Library of Congress
.
all major mathematicians, including Isaac Newton (1642–1727). The growing importance of the sciences and mathematics in the eighteenth and nineteenth centuries helped Euclid's ideas keep their influence in schools and universities throughout the Western (having to do with nations of Europe and America) world.

Some of Euclid's other works are known only because other writers have mentioned them. The book Data discusses plane geometry and contains propositions (problems to be demonstrated) in which certain data are given about a figure and from which other data can be figured out. Euclid's On Division, also dealing with plane geometry, is concerned with more general problems of division. A work by Euclid that has survived is Phaenomena. This is what today would be called applied mathematics, concerning the geometry of spheres for use in astronomy.

Another surviving work, the Optics, corrects the belief held at the time that the sun and other heavenly bodies are actually the size they appear to be to the eye. This work discusses the relationship between what the eye sees of an object and what the object actually is. For example, the eye always sees less than half of a sphere, and as the observer moves closer to the sphere, the part of it that is seen is decreased, although it appears larger.

Another lost work is the Porisms. A porism is somewhere between a theorem and a problem; that is, rather than something to be proved or something to be constructed, a porism is concerned with bringing out another feature of something that is already there. To find the center of a circle or to find the greatest common divisor of two numbers are examples of porisms. This work appears to have been more advanced than the Elements, and perhaps if it still existed it would give Euclid a higher place in the history of mathematics.

Scott, Joseph Frederick. A History of Mathematics: From Antiquity to the Beginning of the Nineteenth Century. London: Taylor & Francis, 1958.

how did Euclid die? I need to know now for my class assignment.
3
kathleen

great information, but where was euclid born and grew up with?