Ralph Waldo Emerson was one of the most thought-provoking American cultural leaders of the mid-nineteenth century. He represented a minority of Americans with his unconventional ideas and actions, but by the end of his life many considered him to be a wise person.

Ralph Waldo Emerson was born in Boston, Massachusetts, on May 25, 1803, to a fairly well-known New England family. His father was an important Boston minister. Young Emerson was only eight, however, when his father died and left the family to face hard times. His mother ran a boarding-house to support the family, which consisted of six children. The poverty in which the Emerson family lived did not prevent his mother from sending the promising boy to the Boston Latin School, where he received the best education of his time. In 1817, at age fourteen, he entered Harvard College. As a student, he studied more and relaxed less than some of his classmates. He won several minor prizes for his writing. When he was seventeen, he started keeping a journal and continued it for over half a century.

Emerson was slow in finding himself. After graduation from Harvard in 1821, he took a job as a teacher. Gradually he moved toward the ministry. He studied at the Harvard Divinity School, meanwhile continuing his journal and other writings. In 1826 he began his career as a Unitarian minister. Emerson received several offers before an unusually attractive one presented itself: a position as the junior pastor at Boston's noted Second Church, with the promise that he would quickly become the senior pastor. His reputation spread swiftly. Soon he was chosen chaplain (a clergyman who carries out religious services for institutions) of the Massachusetts Senate, and he was elected to the Boston School Committee.

Emerson's personal life flowered even more than his professional one, as he fell deeply in love, for the only time in his life, with a charming New Hampshire girl named Ellen Tucker. Their wedding, in September 1829, marked the start of a wonderful marriage. But it was all too short, for she died a year and a half later, leaving Emerson alone. Though he tried to find comfort in his religion, he was unsuccessful. As a result he developed religious doubts. In September 1832 he resigned his pastorate. According to his farewell sermon, he could no longer believe in celebrating Holy Communion.

Emerson's decision to leave the ministry was more difficult than he thought, because it left him with no other work to do. After months of struggling and even sickness, he scraped together enough money to take a ten-month tour of Europe.

The times were on Emerson's side, for he found on his return to America that a new tradition was emerging that held a unique promise for him. This was the lyceum, a system of lecturing that started in the late 1820s, established itself in the 1830s, and rose to great popularity during the next two decades. The local lecture clubs that sprang up discovered that they had to pay for the best lecturers, and from this he earned a modest salary. After a few seasons Emerson organized his own lecture 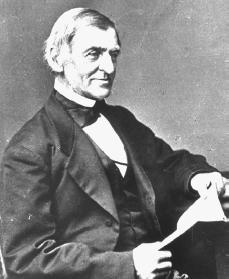 Ralph Waldo Emerson.
Reproduced by permission of the
Corbis Corporation
.
courses in addition to his lyceum lectures. His lectures developed into essays and books, and he began publishing these in the early 1840s.

Emerson spoke out against materialism (the belief that material or physical things—not spiritual—are the most important), formal religion, and slavery. Emerson spoke of slavery in the context of the Fugitive Slave Law (1850), saying, in one of his rare bursts of obscenity (foul language), "I will not obey it, by God."

Emerson, however, was not merely against certain things; he both preached and modeled a positive attitude. He became America's leading transcendentalist (a person who believes that reality is discovered through thought and not experience). That is, he believed in a reality and a knowledge that rose above the everyday reality to which Americans were accustomed. He believed in the honesty of the person. He believed in a spiritual universe ruled by a spiritual Oversoul (the basis of all spiritual existence), with which each individual soul should try to connect. Touchingly enough, he believed in America. Though he ranked as his country's most searching critic, he helped as much as anyone to establish the "American identity." He not only called out for a genuinely American literature, but he also helped begin it through his own writings. In addition, he supported the cause of American music and American art. His grand purpose, as a matter of fact, was to assist in the creation of a native American national culture.

Emerson's first two books were brilliant. He had published a pamphlet, Nature, in 1836. He later issued two volumes of essays for a broader public, however, Essays, First Series, in 1841 and Essays, Second Series, in 1844. Their subjects were man, nature, and God. In such pieces as "Self-reliance," "Spiritual Laws," "Nature," "The Poet," and "The Over-soul," Emerson explained the inborn goodness of man, the joys of nature and their spiritual significance, and a universal god (a god that exists everywhere and belongs to all). The tone of the essays was positive, but Emerson did not neglect the realities of life. In such essays as "Compensation" and "Experience," he tried to suggest how to deal with human losses and failings.

Emerson's next book, after the second series of essays, was a volume of his poems. After that came more than one remarkable volume of text. In Representative Men: Seven Lectures (1850) Emerson considered the similarities of great men, devoting individual essays to such figures as Plato (c. 427–c. 347 B.C.E. ), William Shakespeare (1564–1616), and Johann Wolfgang von Goethe (1749–1832). English Traits (1856) resulted from an extended visit to Great Britain.

Emerson married his second wife, Lydia Jackson of Plymouth, in 1835. They had four children, one of whom, Waldo, died when he was a little boy; the others outlived their famous father. After leaving his pastorate in Boston, Massachusetts, he moved to nearby Concord, where he stayed for the rest of his life.

Emerson's public life also expanded. During the 1850s he was drawn deeply into the struggle against slavery. Though he found some of the abolitionists (people who worked to end slavery) almost as distasteful as the slaveholders, he knew where his place had to be. Emerson became a Republican, voting for Abraham Lincoln (1809–1965).

After the Civil War (1861–65; a war between the proslavery Southern states and the antislavery Northern states), Emerson continued to lecture and write. Though he had nothing really new to say anymore, audiences continued to crowd his lectures and many readers bought his books. The best of the final books were Society and Solitude (1870) and Letters and Social Aims (1876). He was losing his memory, however, and needed more and more help from others, especially his daughter Ellen. He was nearly seventy-nine when he died on April 27, 1882.

America mourned Emerson's passing, as did much of the rest of the Western world (the United States and European countries). In the general judgment, he had been both a great writer and a great man. Certainly he had been America's leading essayist for half a century. And he had been not only one of the most wise but one of the most sincere of men. He had shown his countrymen the possibilities of the human spirit, and he had done so without a trace of arrogance.