Polish-born English novelist Joseph Conrad is one of the great modern writers of England. His novels reflect his concerns with the complex individual, and how sympathy and imagination can blur clear judgment—which is essential to life. The character development in Conrad's books is engaging and powerful.

Childhood in Poland and Russia

Józef Teodor Konrad Nalecz Korzeniowski (Joseph Conrad) was born to Joseph Theodore Appollonius Korzeniowski and Evelina Korzeniowski on December 3, 1857, in Berdyczew, Poland. His father was a writer and a translator of the works of William Shakespeare (1564–1616). He was also a member of a movement seeking Polish independence from Russia. In 1862 the family was forced to move to Russia because of his father's political activities. Conrad's mother died three years later in 1865. It was not until 1867 that Conrad and his father were allowed to return to Poland.

In 1868 Conrad attended high school in the Austrian province of Galicia for one year. The following year he and his father moved to Cracow, Poland, where his father died in 1869. From the time spent with his father, Conrad became a lover of literature, especially tales of the sea. After his father's death, his uncle, Thaddus Bobrowski, took Conrad in and raised him.

As a teenager the future novelist began dreaming of going to sea. In 1873, while on vacation in western Europe, Conrad saw the sea for the first time. In the autumn of 1874 Conrad went to Marseilles, France, where he entered the French marine service. For the next twenty years Conrad led a successful career as a ship's officer. In 1877 he probably took part in the illegal shipment of arms from France to Spain in support of the pretender to the Spanish throne, Don Carlos (1788–1855). At about this time Conrad seems to have fallen in love with a girl who was also a supporter of Carlos. The affair ended in a duel with an American named J. M. K. Blunt. This was the first time Conrad thought of taking his own life.

In June 1878 Conrad went to England for the first time. He worked as a seaman on English ships, and in 1880 he began his career as an officer in the British merchant service, rising from third mate to master. His voyages took him to distant and exotic places such as Australia, India, Singapore, Java, and Borneo, which would provide the background for much of his fiction. In 1886 he became a British citizen. He received his first command in 1888. In 1890 he traveled to the Belgian Congo, Zaire, and Africa, which inspired his great short novel The Heart of Darkness.

In the early 1890s Conrad had begun to think about writing fiction based on his experiences in the East. In 1893 he discussed his work in progress, the novel Almayer's Folly, with a passenger, the novelist John Galsworthy (1867–1933). A year later he retired from the merchant marines and completed Almayer's Folly, which was published in 1895. 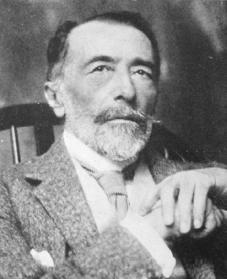 Joseph Conrad.
Courtesy of the
Library of Congress
.
It received favorable reviews and Conrad began a new career as a writer.

From 1896 through 1904 Conrad wrote novels about places he visited as a merchant marine and he explored themes such as the uncertainties of human sympathy. His early novels included An Outcast of the Islands (1896), The Nigger of the "Narcissus" (1897), The Heart of Darkness (1899), and Lord Jim (1900).

The next three novels reflected Conrad's political side. The theme of Nostromo (1904) was the relationship between man's deepest needs (his psychology) and his public actions and decisions. The description of London, England, in The Secret Agent (1907) was similar to Charles Dickens's works. It portrayed a city of mean streets and shabby lives. In Under Western Eyes (1911) Conrad examined the Russian temperament.

Although Conrad's last novels, The Shadow Line (1917) and The Rover (1923), were written as a farewell, he received many honors. In 1923 he visited the United States to great fanfare. The year after, he declined an offer of knighthood in England.

On August 3, 1924, Conrad died of a heart attack and was buried at Canterbury, England. His gravestone bears these lines from Edmund Spenser (1552–1599): "Sleep after toyle, port after stormie seas,/ Ease after warre, death after life, does greatly please."

Your website was very helpful to me. It had all the information I needed about Joseph's life. Thank you.