Samuel Taylor Coleridge was a major poet of the English Romantic period, a literary movement characterized by imagination, passion, and the supernatural. He is also noted for his works on literature, religion, and the organization of society.

Samuel Taylor Coleridge, the tenth and last child of the vicar of Ottery Saint Mary near Devonshire, England, was born on October 21, 1772. After his father's death in 1782, he was sent to Christ's Hospital for schooling. He had an amazing memory and an eagerness to learn. However, he described his next three years of school as, "depressed, moping, friendless." In 1791 he entered Jesus College, Cambridge, England. Because of bad debts, Coleridge joined the 15th Light Dragoons, a British cavalry unit, in December 1793. After his discharge in April 1794, he returned to Jesus College, but he left in December without completing a degree.

The reason he left was because of his developing friendship with Robert Southey (1774–1843). Both young men were very interested in poetry and shared the same dislike for the neoclassic tradition (a return to the Greek and Latin classics). Both were also radicals in politics. From their emotional and idealistic conversations, they developed a plan for a "pantisocracy," a vision of an ideal community to be founded in America. This plan never came to be. On October 4, 1795, Coleridge married Sara Fricker, the sister of Southey's wife-to-be. By that time, however, his friendship with Southey had already ended.

The years from 1795 to 1802 were for Coleridge a period of fast poetic and intellectual growth. His first major poem, "The Eolian Harp," was published in 1796 in his Poems on Various Subjects. Its verse and theme contributed to the growth of English Romanticism, illustrating a blending of emotional expression and description with meditation.

From March to May 1796 Coleridge edited the Watchman, a periodical that failed after ten issues. While this failure made him realize that he was "not fit for public life," his next poem, "Ode to the Departing Year," 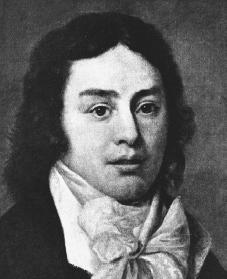 Samuel Taylor Coleridge.
Courtesy of the
Library of Congress
.
shows that he still had poetic passion. Yet philosophy and religion were his overriding interests. In Religious Musings (published in 1796), he wrote about the unity and wholeness of the universe and the relationship between God and the created world.

The most influential event in Coleridge's career was his friendship with William Wordsworth (1770–1850) and his wife Dorothy from 1796 to 1810. This friendship brought a joint publication with Wordsworth of the Lyrical Ballads, a collection of twenty-three poems, in September 1798. The volume contained nineteen of Wordsworth's poems and four of Coleridge's. The most famous of these was "The Rime of the Ancient Mariner." Coleridge later described the division of labor between the two poets: Wordsworth was "to give the charm of novelty to things of every day by awakening the mind's attention from the lethargy of custom, and directing it to the loveliness and the wonders of the world before us," while Coleridge's "endeavours should be directed to persons and characters supernatural, or at least romantic."

A second, enlarged edition of Coleridge's Poems also appeared in 1798. It contained further lyrical and symbolic works, such as "This Lime-Tree Bower, My Prison" and "Fears in Solitude." At this time Coleridge also wrote "Kubla Khan," perhaps the most famous of his poems, and began the piece "Christabel."

After spending a year in Germany with the Wordsworths, Coleridge returned to England and settled in the Lake District. For the next twelve years Coleridge had a miserable life. The climate made his many ailments worse. For pain relief he took laudanum, a type of opium drug, and soon became an addict. His marriage was failing, especially once Coleridge fell in love with Sara Hutchinson, Wordsworth's sister-in-law. Poor health and emotional stress affected his writing. However, in 1802, he did publish the last and most moving of his major poems, "Dejection: An Ode." After a two-year stay in Malta (a group of islands in the Mediterranean), he separated from his wife in 1806. The only bright point in his life was his friendship with the Wordsworths, but by 1810, after his return to the Lake District, their friendship had lessened. Coleridge then moved to London.

Meanwhile, Coleridge's poetry and his brilliant conversation had earned him public recognition, and between 1808 and 1819 he gave several series of lectures, mainly on William Shakespeare (1564–1616) and other literary topics. His only dramatic work, Osorio, written in 1797, was performed in 1813 under the title Remorse. "Christabel" and "Kubla Khan" were published in 1816.

Coleridge spent the last eighteen years of his life at Highgate, near London, England, as a patient under the care of Dr. James Gillman. There he wrote several works which were to have tremendous influence on the future course of English thought in many fields: Biographia literaria (1817), Lay Sermons (1817), Aids to Reflection (1825), and The Constitution of Church and State (1829).

When Coleridge died on July 25, 1834, at Highgate, he left bulky manuscript notes that scholars of the mid-twentieth century found and began editing. When the material is eventually published, scholars and the general public will realize the extraordinary range and depth of Coleridge's philosophical thoughts, and will understand his true impact on generations of poets and thinkers.