The American musician Nat "King" Cole was beloved by millions as a singer of popular songs, but his specialty was piano in the tradition of "cool" jazz.

Nathaniel Adams Coles, the youngest son of the Reverend Edwards Coles and Perlina (Adams) Coles, was born on March 17, 1917, in Montgomery, Alabama. (Cole would drop the "s" from his name early in his career.) Cole's father moved the family to Chicago, Illinois, in 1921. His father served as pastor of the Truelight Spiritual Temple on the South Side of Chicago. By the time he reached the age of twelve, Cole was playing the organ and singing in the choir of his father's church under his mother's choir direction.

Cole took piano lessons in order to learn how to read music. Inspired by show business, Cole formed his own big band, the Rogues of Rhythm. His older brother Eddie, previously bassist with Noble Sissle's orchestra, joined him.

The genius of Cole, Moore, and Miller

In Hollywood for a series of gigs, Cole put together a trio that would become legendary. Cole's first bass player, later replaced by the legendary Johnny "Thrifty" Miller, was Wesley Prince, who introduced Cole to Oscar Moore, a movie studio guitarist. Although Irving Ashby eventually replaced Moore, the trio reached its peak with the combined genius of Cole, Moore, and Miller. The three musicians each possessed exceptional gifts of improvisation (to make up without practice), which blended original inventions with jazz standards.

Legend has it that during an after-hours vocalization with his trio, a young woman in the club crowned Cole the "King," an affectionate nickname, which stuck ever after. From this Cole would take his rightful place among the royalty of jazz, which included "Count" Basie (1904–1984) and "Duke" Ellington (1899–1974).

With the arrival of the spring of 1944 came a second Capital recording of "Straighten Up and Fly Right" and, on the flip side, "I Just Can't See for Lookin'." After this Cole strung together several hits: "Gee, Baby, Ain't I Good to You?" "Bring Another Drink," "If You Can't Smile and Say Yes," "Shy Guy," and then two real winners, "Frim Fram Sauce" and "Route 66."

End of the trio

As success mounted, the jazz lessened and Cole's popular vocalization increased. At 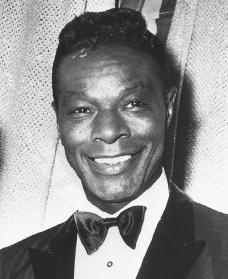 Nat "King" Cole.
Reproduced by permission of
AP/Wide World Photos
.
the same time, the trio began to fade into the background, sometimes not appearing at all. With his recording of Mel Torme's "Christmas Song," a new career was launched for Cole. This left little room for Moore and Miller and the trio broke up.

Cole, now a solo artist, settled in Los Angeles, California. He divorced his first wife, Nadine, whom he had married in 1937. He married for a second and last time to singer Marie Ellington. Although not related, Marie sang with Duke Ellington's band. Cole and Marie had three daughters: Carol, Timlin, and Natalie.

After a string of hits, Cole's life came to a sad ending. The sound quality of his voice came not only from his broad Southern accent and velvety voice, but also from his cigarette smoking. On a WNEW New York interview shortly before his untimely death in 1965 from throat cancer, host William B. Williams asked Cole how he could smoke so much and still be a singer. Cole responded by saying he had learned two things: the choice of the right key for a song meant everything, and smoking helps a singer get a husky sound in his voice that the audience loves. "So," Cole said, "if you want to sing, keep on smoking."

When Cole died, a legendary jazz artist and a voice millions knew as the voice of a friend was lost to the world. Cole's smooth, relaxed delivery established a style out of which others grew, including the styles of Mel Torme, Johnny Ray, Johnny Mathis (1935–), Oscar Peterson (1925–), Frankie Laine, Tony Bennett (1926–), and early Ray Charles (1930–).

On March 6, 2000 Cole was inducted into the Rock and Roll Hall of Fame in the Early Influences category. The category includes artists whose music predates rock and roll, but who inspired and had a major effect on rock and roll music.