Founder of one of the world's most successful women's apparel (clothing) manufacturing companies, Liz Claiborne is a pioneer in designing reasonably priced, quality clothing for modern working women.

Elisabeth Claiborne was born on March 31, 1929, in Brussels, Belgium. She was the only child of American parents, Omer V. Claiborne, a banker for the Morgan Guaranty Trust Company, and Louise Fenner Claiborne. Her father taught her to appreciate art and her mother taught her to sew. Claiborne spent her early years in Belgium and learned to speak French before English. In 1939 the family left Belgium for their home in New Orleans, Louisiana. Claiborne's father did not consider formal education important. Before she could graduate from high school, her father sent her to study art in Belgium and France. Although her parents expected her to become an artist, Claiborne wanted to pursue a career as a clothing designer.

When Claiborne was twenty-one years old her sketch for a woman's coat won a design competition sponsored by Harper's Bazaar magazine. She began working in New York City as a design assistant and model. During the 1950s she designed sportswear, dresses, and tailored clothing. From 1960 to 1975 she was the main designer for the junior dress division of Jonathan Logan, a major women's apparel manufacturer. During this time Claiborne also raised her son from her first marriage to Ben Schultz and two stepchildren from her second marriage to Arthur Ortenberg, a clothing manufacturer.

Starts her own company

Claiborne saw a need for more comfortable professional clothes for working women. Unable to convince her employer to try to meet that need, Claiborne started her own company. Liz Claiborne, Inc. was founded in 1976 with approximately $250,000, including $50,000 of Claiborne and her husband's savings. Ortenberg was the company's secretary and treasurer; industry executive and friend Leonard Boxer handled production; and Jerome Chazen joined the company in 1977 to run the company's marketing operations.

Claiborne's clothes were instantly popular. Total sales for the first year were over two million dollars. Priced in a moderate range and sold in department stores, Liz Claiborne clothes became known among working women for their good quality materials, comfortable fit, good construction, and color selection. Sales increased to $117 million in 1981. The company was considered one of the best managed in the highly competitive women's fashion business.

Within a few years after the first shares of stock in Liz Claiborne, Inc., went on sale in 1981, Claiborne and Ortenberg were millionaires. The company's market share and profits continued to grow. Claiborne added shoes, men's clothing, and perfume to the product line. The company's success was helped by what Ortenberg described as an "exploding market" of millions of women who graduated from college and entered the workforce during the 1980s. Encouraged by Claiborne's merchandise, women were becoming more confident about dressing for work. 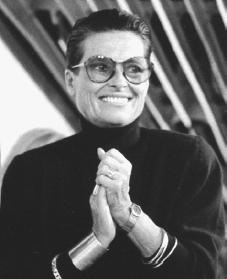 In 1986, when company sales reached $1.2 billion, it joined the list of Fortune magazine's five hundred largest industrial companies in the United States, one of only two companies on the list that had been started by a woman. Also in 1986 Claiborne, who was company president, became chairman of the board and chief executive officer. She continued to advise the company's design teams, placing great importance on the company's goals of providing good fit, color, comfort, and value.

Claiborne and her husband retired from active management of the company in 1989 in order to pursue environmental and charity work. The Liz Claiborne and Art Ortenberg Foundation was established in 1989 to provide support for protection of the wilderness. In 1990 Claiborne and her husband were elected to the National Business Hall of Fame. Claiborne was elected to the National Sales Hall of Fame in 1991, and she received an honorary (received without meeting the normal requirements) doctorate degree from the Rhode Island School of Design the same year.

Liz Claiborne, Inc., remains a fashion power and now employs over seven thousand people. The company continued its growth by purchasing other clothing companies such as Lucky Brand Dungarees and Laundry. In 2000, after receiving complaints from Muslims, the company was forced to recall eight thousand pairs of jeans with verses from the Koran (the holy book of the Islam faith) printed on them. The company also received some criticism over the 2001 release of a perfume called Mambo, which was seen as an attempt to cash in on the growing Hispanic population of the United States.

Liz Claiborne and her husband remain active in a number of charities and avoid the public eye as much as possible. At the 2000 American Fashion Awards presented by the Council of Fashion Designers of America, Claiborne was honored for her environmental work, particularly in helping to fight the killing of African elephants for their ivory tusks.