Chiang Kai-shek was a Chinese political leader and the major figure of Chinese history from 1927 to 1948. He led the Chinese Republic during World War II (1939–45) and was eventually forced from power by the Chinese Communists. After 1950 he served as president of the Republic of China on Taiwan.

Chiang Kai-shek was born in Ch'i-k'ou, Chekiang, China, on October 30, 1887. Chiang was the son of a salt merchant and grew up in the densely populated province of Zhejiang. He received a traditional Chinese schooling which centered around Confucianism, a religious system based on the Chinese philosopher Confucius (551–479 B.C.E. ).

In 1905 Chiang went to Ningpo to study and decided to pursue a military career. In 1906 he went to Tokyo where fellow Chekiangese Ch'en Ch'i-mei sponsored Chiang's entry into Sun Yat-sen's (1866–1925) revolutionary party, the T'ung-meng hui. When the revolution broke out in Wuhan, China, on October 10, 1911, Chiang returned to Shanghai, China, to fight under Ch'en. A series of triumphs by Ch'en and other revolutionists in the lower Yangtze Valley set the stage for the installation of Sun Yat-sen as temporary president of the Chinese Republic. In 1916, Ch'en was assassinated.

In the fall of 1917 Sun Yat-sen moved to Canton, China, where he tried to establish a military base through an alliance with a local warlord, Ch'en Chiung-ming. Chiang was assigned to Ch'en's staff, but as a Chekiangese, Chiang was not readily accepted among Ch'en's Cantonese followers.

By early 1922 differences in policy between Sun and Ch'en had reached the breaking point and Sun and Chiang hid on a gunboat, a small, armed craft. But before long, fortune turned once again in Sun's favor, and by February 1923 he was back in Canton. On April 20 Chiang assumed duties as Sun's chief of staff. Sun by now had turned for support to the revolutionary group in Moscow, and Chiang headed a group to seek military assistance in the former Soviet Union, a formerly powerful country made up of Russia and several other nations.

On May 3, 1923, Chiang became commandant of the Whampoa Military Academy. There, with Soviet advisers and arms, Chiang organized a military elite, the Whampoa Clique. After Sun Yat-sen died on March 12, 1925, a power struggle followed, and Chiang won. With support from the chief Soviet adviser, Michael Borodin, Chiang made the most of these circumstances and established himself as an able leader. Chiang also rid the party of leading Communists, people that believe in a political system where goods and services are owned by the government.

Having strengthened his political position, Chiang prepared to carry out Sun Yatsen's 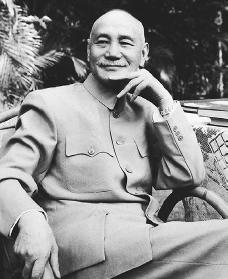 Chiang Kai-shek.
Reproduced by permission of
Archive Photos, Inc.
dream of national reunification, or to bring the country back under one government. On July 9, 1926, he became supreme commander of the Northern Expeditionary Forces. Chiang's troops struck northward and Shanghai was occupied on March 22, 1927, and Nanking on March 24. In less than a year Chiang had brought the wealthy and heavily populated provinces of southern, central, and eastern China under Nationalist control.

However, Chiang was unable to untangle the remaining political and military rivalries. He briefly retired in 1927 to arrange his marriage to Soong Mei-ling. Chiang's bride was a member of a leading Christian family of Shanghai, and one of her sisters, Soong Ch'ing-ling, was the widow of Sun Yat-sen. As a condition of the marriage, Chiang agreed to study Christianity; he eventually became a devout (deeply religious) Methodist.

The decade from 1928 to 1937 was peaceful only in comparison to what came before it and what followed. Not a year passed without bloodshed among militarists, Nationalists, Communists, and Japanese invaders. German advisers and arsenals helped build a modern army, which finally drove out the Communists from their base in Kiangsi and forced their demolished army to flee.

These were also years of promising developments in the Chinese cities, especially in the lower Yangtze Valley and Manchuria. With their emphasis on modern, urban development, the Nationalists secured the cooperation of many talented, foreign-educated intellectuals, and higher education flourished. At the same time Chiang initiated a "New Life Movement," seeking to introduce China's millions with military discipline and enthusiasm for Confucian values. However, neither this nor the ideas of Sun Yat-sen provided an attractive alternative to Marxism, the social and political philosophy that is the basis for communism. Moreover, two unresolved problems, the poor state of rural China and the thrust of Japanese aggression, provided opportunities for the Communists.

Kidnapped at Sian on December 12, 1936, by the Manchurian warlord Chang Hsüeh-liang, Chiang was forced to accept Chang's demands that he join the Communists in a united front against Japan. But two weeks later Chiang returned to Nanking a national hero.

During the first year of the Second Sino-Japanese War (1937–45), where Japanese and Chinese forces clashed over land, Chiang's popularity soared. From August to December 1937 his German-trained armies fought a magnificent holding action around Shanghai and Nanking. Proud and stubborn, Chiang symbolized China's resistance against the Japanese war machine. His supremacy was confirmed in March 1938, when he assumed the title of Tsung-tsai (Party Leader).

By 1941, however, the wartime enthusiasm was beginning to crumble. The economy was headed into a tailspin, and the break with the Chinese Communist Party (CCP) was almost complete. By the time the United States entered the war with Japan in December, war-weary Chinese were losing faith. The American alliance proved disappointing. Through the good offices of President Franklin Roosevelt (1882–1945), Chiang was able to join the Great Powers in world diplomatic councils, but he received little respect from British prime minister Winston Churchill (1874–1965) and Soviet premier Joseph Stalin (1879–1953).

By Victory in Japan Day (V-J Day) on August 14, 1945, unresolved prewar problems that increased by wartime conditions had weakened Chiang's government and allowed Marxist Mao Tse-tung (1893–1976) to expand control over a population of some one hundred million Chinese. The Marshall mission, sent by President Harry Truman (1884–1972) on October 27, 1945, to work with both sides, failed to prevent the outbreak of civil war. Overconfident at the outset, Chiang committed serious mistakes on the battlefield.

By 1948 the tide of battle had turned against the Nationalists. Mukden fell on November 1, 1948, followed two months later by Peiping. On January 21, 1949, Chiang retired from the presidency, leaving Li Tsung-jen with the thankless job of trying to salvage something from a situation beyond repair.

Many of the goals that escaped Chiang on the vast mainland came within reach on the island of Taiwan (Formosa), a seat of the Chinese Nationalist government. There, he gained unchallenged and virtually unlimited power. After 1954 the island enjoyed a spectacular economic boom, making its standard of living second only to Japan's among the nations of Asia.

The year 1972 proved to be pivotal for Chiang Kai-shek and Taiwan because President Richard Nixon (1913–1994) visited the People's Republic of China. President Nixon also agreed that Taiwan was a part of China. These diplomatic setbacks, mixed with failing health, had many questioning Chiang Kai-shek's ability to lead the country. His son, Chiang Ching-kuo, who was appointed premier in May, assumed most of Chiang Kaishek's duties. For the last three years of his life, Chiang Kai-shek was the ceremonial leader of the Republic of China, but his son was the practical leader. Chiang Kai-shek suffered a fatal heart attack on April 5, 1975.