Dick Cheney is the forty-sixth vice president of the United States, serving under President George W. Bush (1946–). He helped plan the war on terrorism that began after the country was attacked in 2001. He also served as secretary of defense under President George Bush (1924–) and spent almost his entire career working for the federal government.

Born in Lincoln, Nebraska, on January 30, 1941, Richard B. Cheney was raised in Casper, Wyoming, by his parents, Richard H. Cheney, a Department of Agriculture employee, and Marjorie L. Dickey. He attended Yale University but left in his second year to return home, where he worked for the next two years. Resuming his studies at the University of Wyoming in 1963, he earned his bachelor's degree in political science in 1965 and his master's degree one year later. In 1964 he married Lynne Vincent, and the couple had two daughters.

The road to Washington, D.C.

Cheney went to work in the Wyoming state legislature and for Governor Warren Knowles (1908–1993) of Madison, Wisconsin, before landing a position in Washington on the staff of Congressman William Steiger (1938– 1978) of Wisconsin. He went on to work as special assistant to Donald Rumsfeld (1932–), director of the Office of Economic Opportunity, under President Richard Nixon (1913–1994).

After Cheney left Washington for a little over a year to work for an investment company, in August 1974 the call came to join Rumsfeld on the staff of President Gerald Ford (1913–). Cheney served as deputy assistant to the president. He remained loyal, good-natured, hardworking, and civil. He preferred just to work and did not try to attract attention to himself. These traits brought him to the post of assistant to the president and chief of staff when Rumsfeld became Ford's choice to head the Department of Defense.

Back to Wyoming, and back to Washington

Ford's loss to Jimmy Carter (1924–) in the 1976 presidential election sent Cheney back to Wyoming and private employment. But the lure of Washington was too great, and in 1978 he ran for Congress as a Republican, winning the election despite suffering a heart attack during his campaign.

From January 1979 until March 1989, Congressman Cheney sided with conservatives on most issues. For example, he was in favor of spending more money on weapons to defend the country, and he opposed abortion (the purposeful termination of a pregnancy).

His dedication in Congress made him a natural choice to serve on the House committee that was set up to investigate charges that President Ronald Reagan (1911–) had traded weapons to Iran in return for the release of fifty-two Americans who had been taken prisoner there. Cheney defended the Reagan administration's actions.

In 1989 President George Bush (1924–) chose Cheney for the job of secretary of defense. Cheney won praise for the invasion of Panama and for the removal of that country's chief of state, General Manuel Noriega (1938–), who had been charged with bringing drugs into the United States. But Secretary Cheney's most important test came in August 1990, when Iraq invaded Kuwait. On January 16, 1991, the United States began a violent air war against Iraq. This was followed by a ground attack launched a month later that destroyed most of Iraq's military forces in 100 hours. The war made Cheney and Chief of Staff Colin Powell (1937–) popular heroes.

After the war with Iraq, Cheney turned to the task of reducing the strength of the U.S. military, closing some military bases and trying to find other ways to cut costs. He and the Bush team reduced the military budget, shrank the size of U.S. military forces, and signed a number of treaties in an effort to maintain peace around the world.

Called back to serve

After Bush lost his bid for reelection to Bill Clinton (1946–), Cheney returned to the business world as chief executive at the Halliburton Company, an oil drilling and construction services company. He remained a voice in government affairs, often commenting on Clinton administration choices, and he was mentioned by many as a possible candidate for vice president.

In 2000, Texas governor George W. Bush (1946–) asked Cheney to join his presidential campaign as his vice presidential candidate. After winning the election, Bush and Cheney were sworn in on January 20, 2001. Cheney went about his business quietly as always, leading many who were not familiar with his behind-the-scenes style to wonder if his 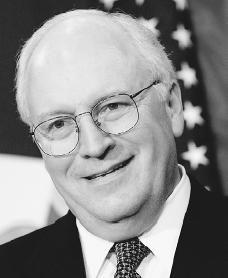 Dick Cheney.
Reproduced by permission of the
Corbis Corporation
.
health was a problem after having suffered four heart attacks.

However, after the terrorist attacks on the United States on September 11, 2001, Cheney showed how important he was to the administration. He advised the president to create the Office of Homeland Security and played a major role in planning and monitoring the country's war on terrorism. He also met with congressional leaders and foreign ministers to seek their support for the fight. Cheney's experience gained during the war against Iraq ten years earlier proved of great value to both President Bush and the country as a whole.