The Russian author Anton Chekhov is among the major short-story writers and dramatists in history. He wrote seventeen plays and almost six hundred stories.

Anton Pavlovich Chekhov was born in Taganrog in South Russia on the Azov Sea on January 17, 1860. He was the third of six children of Pavel Egorovich Chekhov, a grocery store owner. Chekhov's grandfather was a serf (a peasant who lives and works on land owned by another) who bought his family's freedom in 1841. The young Chekhov and his brothers and sisters worked in the family store and studied in the local school. Their extremely religious father often beat them. In 1876 his father's business failed, and the family moved to Moscow, Russia, for a fresh start. Chekhov, then sixteen, was left behind to finish his schooling.

The blond, brown-eyed Chekhov was a self-reliant, amusing, energetic, and attractive young man. In August 1879 he joined his parents in Moscow, where his father was a laborer and his mother did part-time sewing work. Chekhov immediately entered the medical school of Moscow University. He soon took his father's place as head of the household, a responsibility he carried the rest of his life. After graduating in 1884 he went to work in the hospital at Chikino, Russia, but by December of that year he had begun coughing up blood—the first symptom of the tuberculosis (an infection in the lungs) that eventually caused his death.

In an attempt to add to his income in Moscow, Chekhov wrote for the humor magazines he himself liked to read. His first story was published in March 1880 by a magazine called the Dragonfly, which went on to publish nine more of his stories, most of them signed "Antosha Chekhonte," that year. In the fall of 1881 he had stories accepted by the Alarm Clock, and he and his older brothers' work was published in a new humor magazine, the Spectator. His first book was The 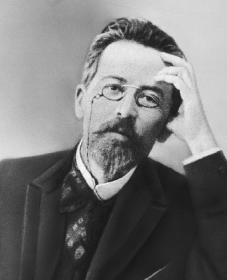 Anton Chekhov.
Reproduced by permission of the
Corbis Corporation
.
Tales of Melpomene, a collection of six humor pieces published with his own money (on credit) in mid-1884. Chekhov's first stories were full of wit and enthusiasm and showed his promise as a writer.

Chekhov's first book published by someone else, Motley Stories, came out in 1886 with his real name on it. The book did well, and Chekhov was recognized as a new talent. He began practicing medicine less and writing more. In February 1887 he was elected to the Literary Fund, an honor given only to prominent authors. In the Twilight, a collection of short stories, appeared in August. Chekhov's first completed play, Ivanov, was produced in Moscow in November 1887. He stopped writing for humor magazines in favor of serious fiction and drama in an attempt to, as he stated in a letter, "depict life as it actually is."

"The Steppe" (1888), a story of the Russian countryside revolving around the adventures of nine-year-old Egorushka while on his way to a distant town with his uncle, began a new phase in Chekhov's writing career. Not only was it accepted by the high-class Northern Messenger magazine—bringing Chekhov a considerable sum of money—but it also was highly praised by other famous writers. In October 1888 he won the Academy of Sciences' Pushkin Prize. "The Lights," "The Name-Day Party," and "An Attack of Nerves" all appeared in this year.

Chekhov spent the summer of 1888 in the Ukraine (where his brother Nikolai died) and at Yalta. The events of this period inspired "A Dreary Story" (1889), in which a dying old man thinks back on what he considers his pointless life. After another collection of stories, Children, was published in March 1889, Chekhov decided that he could now support his family by his writing alone. He wrote some one-act plays and worked on The Wood Demon, but the St. Petersburg (Russia) Theatrical Committee rejected the play, deeply wounding him. In March 1890 his seventh book, a collection of stories entitled Gloomy People, appeared. Late in April 1890 Chekhov set out for the prison colony on the Siberian island of Sakhalin. After spending three months studying the island, Chekhov returned home and wrote Sakhalin Island, which was later published in serial form.

In February 1892 Chekhov bought a 675-acre estate outside of Moscow called Melikhovo, and he settled down on it with his family. Guests streamed out to visit him. By the end of 1893 he was supporting his family comfortably. He began writing more slowly and focusing more on writing plays than before, but his stories continued to appear in the leading St. Petersburg and Moscow magazines. Chekhov was popular and admired. He had a number of pretty, lively, and talented women friends, but none whom he felt strongly enough about to propose marriage. But in 1898, when he was thirty-eight and seriously ill, he met the actress Olga Knipper, and they began an affair.

Chekhov's play The Sea Gull drew heavily on a romance between his former love Lidiya Mizinova and his writer friend I. N. Potapenko. The play had failed in its first presentation in 1896, but in 1898 in the new Moscow Art Theater it was such a spectacular success that the gull became, and remains, the theater's official emblem. Chekhov's other great plays followed quickly: Uncle Vanya, a new version of The Wood Demon, in 1897; Three Sisters in 1900–01; and The Cherry Orchard in 1903–04. They are all about the passing of the old order. In each, a group of upper-class landowners struggles to preserve their cultural values against the social change insisted on by the middle-and lower-class teachers, writers, and businessmen to whom the new life belongs.

Chekhov was at the height of his fame. He encouraged younger writers such as Ivan Bunin (1870–1953) and Leonid Andreyev (1871–1919), recommended writers for the Pushkin Prize, and was eagerly sought out for advice and comment. In 1900 he became the first writer elected to membership in the Russian Academy of Sciences, and in 1901 he and Olga Knipper were married. She acted in Moscow during the season while he stayed in Yalta to improve his health. The letters between them indicate a deep affection. Chekhov's health worsened in 1904, and his doctors told him that he had to go to a hospital. In June 1904 he set off for Badenweiler, Germany. A friend who saw him in Moscow the day before he left for Europe quoted Chekhov as having said, "Tomorrow I leave. Good-bye. I'm going away to die." On July 2, 1904, he died in a hotel at Badenweiler. His body was returned to Moscow for burial.

I had just read the authors quotes and his biography...this kind of men had an inspirational way of inspiring peoples believe to have a certain knowledge during the course of their lifes