Catherine of Aragon was to represent a political union between a strong and powerful Spain and the upand-coming England. Instead she became a model of excellence during a stormy period in European history. She was the first wife of King Henry VIII (1491–1547), and she never gave up the crown, even after her husband tried to divorce her in his quest for a son and heir.

Catherine of Aragon was the last child born to the two reigning monarchs, or rulers, of Spain, King Ferdinand of Aragon (1452–1516) and Queen Isabella of Castile (1451–1504). Catherine was described as a small and plump princess with pink cheeks, light skin, and reddish-gold hair. Her childhood was filled with battles and celebrations, as her parents worked to expand the realm of their influence.

Catherine's education was of great importance to Queen Isabella, who made sure that her daughter studied a wide variety of subjects. Catherine was a dedicated student who was capable of speaking French, Latin, Spanish, and later English. She trained in law, genealogy (the study of family histories), the bible, and history. Catherine also worked to develop her skills in dancing, drawing, and music, and she learned how to embroider, spin, and weave. She had a strong religious upbringing and developed a faith that would play a major role later in her life.

Knowing that marrying their daughters to the royalty of powerful nations could strengthen their foothold in Europe, the king and queen chose these alliances carefully. In May 1499 the first of several wedding ceremonies was held when Catherine was married to Prince Arthur of England, son of Henry VII (1457–1509).

In 1501 Catherine arrived in England as the Princess of Wales. She was welcomed with great celebration. But five months after their marriage, the Prince of Wales died. The comforts that Catherine had enjoyed as a new bride were soon stripped, as King Henry VII refused to support her. For seven years she was the Princess Dowager (widow) of Wales, no longer under the care of her father and refused care by her father-in-law.

When Henry VII passed away, his second son Henry VIII took the throne. This brought Catherine new hope of a marriage and the chance to take her rightful place as queen of England. Henry VIII went against the advice of his council and took Catherine as his bride, a mere six weeks after taking the 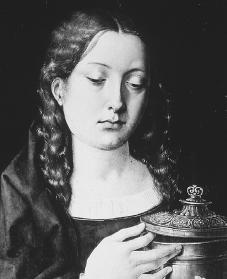 Catherine of Aragon.
Reproduced by permission of
Archive Photos, Inc.
throne. Catherine was well received by the English subjects as their Queen.

Catherine loved her young, athletic, and charming husband. Over the next five years, Catherine gave birth to several children, all of whom were stillborn (dead upon birth) or died during infancy. In February 1516 the birth of Princess Mary was much celebrated. With this birth, Catherine hoped that she could give birth to a son that could survive. But in 1518 Catherine had another stillborn daughter. There were no other children. Despite Henry's frustration, he comforted his wife during each loss.

While Henry was away at war, he named Catherine as the Queen Regent of the Kingdom. This showed how much faith he had in her. In this role Catherine assumed the rule of England while Henry was away. She addressed the English army as they prepared for an invasion by the Scottish. Later Catherine sent Henry the bloodied coat of the Scottish King, who was killed in the battle as proof of her devotion and service to him.

Catherine's religious dedication increased with her age, as did her interest in academics. She continued to broaden her knowledge and provide training for her daughter. Education among women became fashionable, partly from Catherine's influence. She also donated large sums of money to several colleges.

King Henry, with no male heir, grew fearful as to who would take over his thrown. It was around this time that Anne Boleyn (c.1507–1536), a lady in waiting to Catherine, captured Henry's interest. Because Boleyn refused to be anything less than queen, Henry needed a way out of his current marriage. In 1527 Henry used a passage from the Bible as proof that his marriage to his dead brother's widow was not viewed favorably by God, and was therefore cursed with no sons. But the religious court did not agree with this claim and Henry was unable to get out of his marriage.

Catherine refused to withdraw from public life and retire to a nunnery. She firmly believed that her marriage to Henry was divinely ordained, or authorized by God, and to interfere with this would endanger her soul. In the meantime, Henry secretly married Anne Boleyn. In 1533 Catherine's marriage was finally declared invalid by the Archbishop of Canterbury. Stripped of her throne, she was to return to her title of Princess Dowager of Wales by order of the King.

In the end, Henry was cruel to Catherine. He forced her to live in seclusion and refused to allow her to see their daughter, Mary. Catherine died at Kimbolton Castle near Huntington in 1536. Towards the end of her life she maintained herself less in the style of royalty and more like a nun. Catherine was buried in Peterborough Cathedral under the emblem of Wales and Spain, not of England.

Also read article about Catherine of Aragon from Wikipedia

This is a really good site. I'm doing Henry The Eighth in History now and this is interesting extra information, and it's easy to understand! I really like it. This site should be more 'famous'.
2
Tricia

I would just like everyone know that this IS the REAL deal! This isn't some sixth grade report on Catherine of Aragon. This is factual information. Half of the books on the bib. I have personally read and enjoyed!