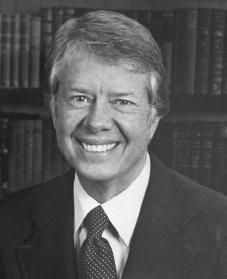 Jimmy Carter.
Courtesy of the
Library of Congress
.
his bid for reelection but continues to be a much admired peacemaker and human rights leader at home and abroad.

James Earl Carter was born in Plains, Georgia, on October 1, 1924. He was the first child of farmer and small businessman James Earl Carter and former nurse Lillian Gordy Carter. At five, Jimmy already showed a talent for business: he began to sell peanuts on the streets of Plains. At the age of nine, Carter invested his earnings in five bales of cotton, which he stored for several years and then sold at a profit. With this money he was able to purchase five old houses in Plains.

Upon his graduation from high school in 1941, Carter enrolled in Georgia Southwestern College, but in 1942 he was appointed to the United States Naval Academy at Annapolis. Carter entered the academy in 1943 and showed a special talent for electronics and naval tactics. He would eventually work on the nation's first nuclear-powered submarines. During his time in the navy he also met Rosalynn Smith (1927–), whom he married on July 7, 1947. The couple had four children.

Carter wanted to become an admiral (a high-ranking officer in the navy), but in 1953, following his father's death from cancer, he returned to Plains to manage the family-owned farm and peanut warehouses. In order to keep up with modern farming methods, he studied at the Agricultural Experimental Station in Tifton, Georgia. During these years in Plains, Carter was active in a number of civic organizations. He set himself apart from others by showing his concern for members of all races, which could be traced back to his mother's refusal to accept many of the deep South's racist (dislike or disrespect of a person based on the color of his or her skin) traditions.

Carter's interest in politics may have come from his father, who had served in the Georgia legislature. In 1962 he ran for a seat in the Georgia Senate and defeated his Republican opponent by approximately one thousand votes. As a state senator, Carter promised to read every single bill that came up. When it looked as if he would not be able to keep this promise because of the large number of bills, he took a speed reading course to solve the problem. He earned a reputation as an effective legislator and was reelected to the state senate in 1964.

In 1966 Carter decided to run for governor of Georgia. He lost to Lester Maddox (1915–) in the Democratic primary election. Although disappointed, Carter pushed forward. Between 1966 and 1970 he traveled throughout the state, making close to eighteen hundred speeches, studying the problems of Georgia, and campaigning. In the 1970 election, Carter's hard work paid off and he won Georgia's top position.

When he was elected governor, Carter announced his intention to help all poor and needy Georgians, regardless of race. This speech won Carter national attention for the first time. He called for an end to prejudice (unequal treatment based on a person's race) and for education, jobs, and "simple justice" for the poor. As governor, he signed into law a bill ensuring that all areas of Georgia would have equal state aid for education. Carter also worked to cut government waste, combining three hundred state agencies into only thirty. The number of African American appointees on state boards and agencies increased, and the number of African American state employees rose by 40 percent. During his term, laws were passed to protect historical sites, to conserve the environment, and to encourage openness in government.

Carter became increasingly involved in national Democratic Party politics. In 1972 he headed the Democratic Governors Campaign Committee, and in 1974 he was chair of the Democratic National Campaign Committee. That same year Carter officially declared his intention to run for president in 1976, even though he was still little known outside the state of Georgia. As late as October 1975 a public opinion poll on possible Democratic candidates did not even list his name. Carter's rise to national prominence began in January 1976 with his intensive and industrious campaigning. By March he was the top choice among Democrats to run for president.

Carter's success began with a victory in the New Hampshire primary in February. He convinced voters that he would be able to act independently and effectively. In his campaign he also vowed to restore moral leadership to the presidency. After the Watergate incident, when Richard Nixon (1913–1994) stepped down as president rather than face criminal charges, this was what people wanted to hear. Carter was elected on the first ballot at the 1976 Democratic National Convention.

With his running mate, Minnesota Democrat Walter Mondale (1928–), Carter made unemployment a central issue of his campaign, urging the creation of jobs through increased federal spending and the growth of business. Carter promised to reorganize the many offices and departments of the federal government and to develop a national energy policy. He also agreed to pardon those who had refused to fight in the Vietnam War (1955–75; this civil war between South Vietnam, supported by the United States, and the Communist forces of North Vietnam had just ended and was long considered a U.S. failure.) America's involvement through the troubled years took the form of military funds, advisors, and thousands of soldiers.

When Carter defeated Gerald Ford (1913–) in the general election, he became the first president from the deep South since Zachary Taylor (1784–1850). Carter's victory margin came from African Americans, from those with low incomes, and from others who thought that they were being hurt by the policies of the Ford administration. One of Carter's challenges was to reach out to groups that had not really supported him, such as Catholics and Italian Americans.

His record as president

Carter's presidency began well. Congress approved his plans to dissolve or combine federal agencies that provided similar services and passed legislation aimed at lowering income taxes. In August 1977 his proposal to establish the Department of Energy as a new executive department was adopted. Unfortunately, inflation (a general increase in prices that reduces the value of money) continued to rise during his term, reaching 15 percent by mid-1980. Carter became more unpopular as a result. A July 1980 poll showed that only 21 percent of those responding approved of the job he was doing, the lowest rating recorded for any American president.

Carter's term was also marked by mixed success in foreign affairs. In 1977 he attracted worldwide attention and praise when he cut off United States aid to nations believed to have committed human rights violations. However, two 1977 treaties dealing with the Panama Canal earned him mixed reviews. The treaties promised to give control of the canal to Panama at the end of 1999 and ensured neutrality of the waterway. Carter also helped in the creation of a peace treaty between Israel and Egypt in 1979 at Camp David, Maryland. With Carter as witness, President Anwar el-Sadat (1918–1981) and Prime Minister Menachem Begin (1913–1992) signed a pact that ended war between the two countries.

Carter's most dramatic moments in foreign policy affairs began in November 1979 when a group of students seized the United States embassy in Teheran, Iran, and took fifty-two U.S. citizens captive. When Carter's responses—including stopping all imports from Iran—did not resolve the situation, he ordered an armed rescue in April 1980, which failed and led to the deaths of eight marines. The hostages were finally released on the last day that Carter held office. Carter had run for reelection in 1980, but he was defeated by former California governor Ronald Reagan (1911–) by a wide margin.

Carter has devoted his career since leaving office to trying to achieve peace and help humanity. In 1981 he established the Carter Center, which sponsors a number of programs, including the promotion of human rights in third-world countries and maintaining detailed medical records for local Atlanta children. The Carter Center also monitors elections in newly democratic countries and works to fight disease. In addition to these efforts, Carter and his wife, Rosalynn, have spent their summers volunteering to build housing for the poor through the Habitat for Humanity organization.

Carter had been criticized for his handling of foreign relations during his presidency, but his tireless work on all kinds of issues since leaving office has earned him great praise. In 1999 Carter was awarded with the Presidential Medal of Freedom, the nation's highest honor for private citizens. In 2002 he was awarded the Nobel Peace Prize for his continuing efforts to bring peace to warring countries, to advance human rights, and to promote economic development in poor countries.