The English poet Lord Byron was one of the most important figures of the Romantic Movement (1785–1830; a period when English literature was full of virtuous heroes and themes of love and triumph). Because of his works, active life, and physical beauty he came to be considered the perfect image of the romantic poet-hero.

George Gordon Noel Byron, sixth Baron Byron, was born on January 22, 1788, into a family of fast-decaying nobility. Captain "Mad Jack" Byron was a "gold digger," marrying Catherine Gordon chiefly for her annual income. After spending most of her money and fathering George, he died in 1791. George was left with an unbalanced mother, the contempt of his aristocratic relatives for the poor widow and her son, and a birth defect necessitating that he walk on the balls and toes of his feet for the rest of his life. All this worked together to hurt the boy's pride and sensitivity. This created in him a need for self-assertion, which he soon sought to gratify in three main directions: love, poetry, and action.

Despite the awkward way he walked and the numerous "remedies" that Byron suffered through, his boyhood was full of play and mischief. His favorite activities were riding and swimming, both sports where he was physically able. But he willingly played cricket, appointing a schoolmate to run for him. At eight years old he fell hopelessly in love with a cousin. At sixteen when he heard of her engagement he reportedly was physically ill. Though said by most of his peers and teachers to have been a genius, Byron was halfhearted in his schoolwork. But he read constantly. He had a strong appetite for information and a remarkable memory. Nevertheless his biography reports Byron as having been the ringleader of numerous school revolts. He spoke of his school friends as "passions."

On the death of his granduncle in 1798, Byron inherited the title and estate. After four years at Harrow (1801–1805), he went to Trinity College, Cambridge, where he became conscious for the first time of the difference between the high goals of idealism (romanticism) and the less important realities of experience. His quest for some genuine passion 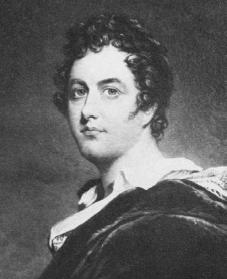 Lord Byron.
Courtesy of the
Library of Congress
.
among the frail women of his world accounts for the crowded catalog of his love affairs.

In 1807 Byron published his first book of poetry, Hours of Idleness. In the preface he apologized, "for obtruding [forcing] myself on the world, when, without doubt, I might be at my age, more usefully employed." The book was harshly criticized by the Edinburgh Review. Byron counterattacked in English Bards and Scotch Reviewers (1809), the first manifestation (sign) of a gift for satire (making fun of human weaknesses) and a sarcastic wit (making fun of someone or something in a harsh way by saying the opposite of what is meant), which singled him out among the major English romantics, and which he may have owed to his aristocratic outlook and his classical education.

In 1809 a two-year trip to the Mediterranean countries provided material for the first two cantos (the main divisions of long poems) of Childe Harold's Pilgrimage. Their publication in 1812 earned Byron instant glory. They combined the more popular features of the late-eighteenth-century romanticism: colorful descriptions of exotic nature, disillusioned meditations on the vanity of earthly things, a lyrical exaltation of freedom, and above all, the new hero, handsome and lonely, yet strongly impassioned even for all of his weariness with life.

While his fame was spreading, Byron was busy shocking London high society. After his affairs with Lady Caroline Lamb and Lady Oxford, his incestuous (a sexual relationship between close relatives) love for his half sister Augusta not only made him a reprobate (a person who is completely without morals), but also strengthened the sense of guilt and doom that he had always felt. From then on the theme of incest was to figure strongly in his writings, starting with the epic tales (long poems that tell stories) that he published between 1812 and 1816: The Giaour, The Bride of Abydos, The Corsair, Lara, The Siege of Corinth, and Parisina. According to Byron, incestuous love, criminal although genuine and irresistible, was a suitable metaphor (symbol) for the tragic condition of man, who is cursed by God, rebuked (judged harshly) by society, and hated by himself because of sins for which he is not responsible. The tales, therefore, add a new dimension of depth to the Byronic hero: in his total alienation (separation from one's surroundings) he now actively takes on the tragic fatality that turns natural instinct into unforgivable sin, and he deliberately takes his rebellious stand as an outcast against all accepted beliefs of the right order of things.

While thus seeking relief in imaginative exploration of his own tortured mind, Byron had been half hoping to find peace and reconciliation in a more settled life. His marriage to Anna Isabella Milbanke (January 1, 1815) soon proved a complete failure. She left him after a year. London society could have ignored the peculiarities of Byron's private life, but a satire against the Prince Regent, "Stanzas to a Lady Weeping," which he had appended (added on) to The Corsair, brought about an outpouring of criticism from the Tories (a political party in England that was loyal to the English monarchy). In their hands Byron's separation from his wife became an efficient weapon. On April 25, 1816, Byron had to leave his native country, never to return.

In Switzerland Byron spent several months in the company of the poet Percy Bysshe Shelley (1792–1822). Under Shelley's influence he read William Wordsworth (1770–1850) and immersed himself in the unpleasant spirituality that permeated the third canto of Childe Harold. But The Prisoner of Chillon and Byron's first drama, Manfred, took the Byronic hero to a new level of inwardness: his greatness now lay in the refusal to bow to the hostile powers that oppressed him, whether he discovered new selfhood in his very dereliction (negligence) or sought the fulfillment of his assertiveness in self-destruction.

In October 1816 Byron left for Italy and settled in Venice. His compositions of 1817, however, show signs of a new outlook. Spontaneous maturation (growing up) had thus paved the way for the healing influence of Teresa Guiccioli, Byron's last love. The poet had at last begun to come to terms with his desperate idea of life.

It is characteristic of Byron's strength of character that he increasingly sought to translate his ideas into action, repeatedly voicing the more radical Whig (a political party in England that supported reform in government and society) viewpoint in the House of Lords in 1812–1813. He also ran real risks to help the Italian Carbonari (a secret group in Italy that worked for a representative government based on a constitution) in 1820–1821. His early poetry had contributed to sensitizing the European mind to the struggle of Greece under Turkish rule. In 1824 Byron joined the Greek freedom fighters at Missolonghi, Greece, where he died of fever on April 19.