In 2000 George W. Bush (1946–) became the forty-third president of the United States, marking a rise to the top American political office in a relatively short political career. Bush's victory was the second time in American history that the son of a former president took on the world's most powerful political job.

George Walker Bush was born in New Haven, Connecticut, on July 6, 1946, to Barbara and George Herbert Walker Bush. His parents moved the family to Texas when George W. was two years old. There his father made a fortune in the oil business. As the eldest of six children, George W. was expected to shine. He was an all-around athlete, a fair student, and an occasional troublemaker in school—he was once punished for painting a mustache on his face during music class. In seventh grade, he ran for class president and won.

While his family lived in Houston, Texas, George W. was sent back east to enroll at Phillips Academy, a private school in Andover, Massachusetts. Although George W. became actively involved in sports, playing baseball, basketball, and football, his high school academic record was far from exceptional. However, through his family's powerful connections, Bush landed a spot at Yale University in Connecticut, where both his father and grandfather had attended.

At Yale, Bush was a popular student. He became president of the Delta Kappa Epsilon fraternity and enjoyed socializing, watching and playing football, and dating. Grades were not a high priority, and because of his mischievous behavior, Bush had a few minor run-ins with the law. Despite his background of privilege, Bush became more at ease with all kinds of people in college. "I was never one to feel guilty," he said about his wealth and family connections. "I feel lucky."

After graduating from Yale in 1968, Bush moved back to Houston where he worked for an agribusiness company (a company that produces farm products and equipment) and for a mentoring program (a program in which people counsel or guide others). But the recent graduate was unfocused. Later, after beginning his political career, questions arose about how he had managed to avoid serving in the Vietnam War (1965–75; a war fought in Vietnam in which the United States supported South Vietnam in its fight against a takeover by North Vietnam). He was a member of a Texas Air National Guard unit stationed at Ellington Air Force Base. The unit included other sons of powerful people. At the time, the National Guard had a long waiting list of young men eager to avoid combat service in Vietnam during the war, but Bush managed to sail through easily.

Texas oilman and the beginning of a political career

Eventually Bush decided to continue his education. He was not accepted by the University of Texas Law School. Instead, he entered Harvard's Business School. After graduation, he retraced his father's footsteps and returned to Midland, Texas, in 1975 to try his luck in the oil business. Bush's first attempt to strike oil was not successful.

In 1977, after the unsuccessful business venture, Bush became interested in politics 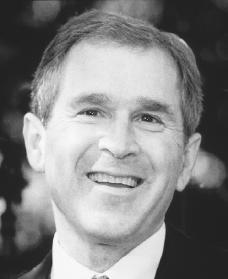 George W. Bush.
Reproduced by permission of
Archive Photos, Inc.
and suddenly announced that he would run for a seat in the U.S. Congress. At the same time, Bush met Laura Welch; three months later, they were married. Later, they would have twin daughters, Jenna and Barbara. As a candidate for a seat in the U.S. House of Representatives, Bush campaigned as a conservative Republican but lost the close election. Afterwards, Bush turned his focus back to his oil company. By this time, gas prices were falling sharply, and the oil business was not doing well. By the mid-1980s, Bush had left the oil business, but not before selling his stock in the company for nearly $850,000.

From baseball to the governor's mansion

Late in 1988, after returning to Texas, Bush put together a group of seventy investors and bought the Texas Rangers, a struggling professional baseball team. Bush quickly emerged as the leader of the investment group. The team soon became successful, and in 1998 the investment group sold the Rangers, earning Bush more than $14 million. The money would later be used to fund his campaign for president.

When his father lost to Bill Clinton (1946–) in the 1992 presidential race, George W. decided to try for political office once again. His status as the most well-known owner of the Rangers and as the son of a former president gave him an advantage as he campaigned for governor of Texas. He won the 1994 election, defeating incumbent governor Aan Richards.

Famous for making connections, Bush used his management skills in the governor's office, but his political personality still needed some work. He complained that he did not like to read long books and that he hated meetings and briefings. Regardless, Governor Bush did work hard supporting education reform and public schools.

A key to Bush's popularity in Texas was his ability to appeal to both moderate Republicans and the state's Christian conservatives (people who resist change and prefer to keep traditions), who had come to control the more conservative side of the Republican Party. Bush described himself as a born-again Christian, something that helped him with the conservative voters. He also downplayed issues like his stand against abortion (a woman's right to end a pregnancy) in an attempt to appeal to a wider range of voters. He used that same formula to win the Republican presidential nomination in 2000.

After winning the Republican nomination, Bush selected Dick Cheney (1941–) as his vice presidential running mate. Cheney had been secretary of defense under Bush's father. Choosing a respected and experienced running mate showed that Bush would surround himself with people who were capable of helping him run the country.

Bush had an early lead, but his opponent, Democratic vice president Al Gore (1948–), bounced back. The media focused on Bush's tendencies to misuse words in speeches. Meanwhile, Gore, an experienced foreign diplomat and two-time vice president, criticized Bush for his weaknesses with foreign policy.

Voting day came and went with no clear winner. Problems with ballots in several counties in Florida prompted ballot recounts. Weeks later, after a five-to-four decision of the U.S. Supreme Court ended the recounts, Bush finally emerged as the winner.

Fewer than nine months into office, Bush's leadership skills were tested like no other president before him. On September 11, 2001, terrorists hijacked four U.S. jetliners, crashing one into rural Pennsylvania, another into the Pentagon building outside Washington, D.C., and two into the World Trade Center buildings in New York City. The tragedy, which killed thousands and destroyed the World Trade Center, prompted Bush to announce a "War on Terrorism." The new war became the focus of Bush's presidency.