The works of the English poet Elizabeth Barrett Browning enjoyed great popularity during her lifetime. Her most enduring poetry has proved to be Sonnets from the Portuguese.

Elizabeth Barrett was the first of twelve children born to Edward and Mary Moulton (the Moultons later took the last name Barrett) on March 6, 1806, in Durham, England. 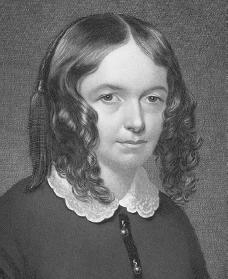 Elizabeth Barrett Browning.
Reproduced by permission of
Archive Photos, Inc.
Her father was a possessive and demanding man loved by his children even though he rigidly controlled their lives. Elizabeth's childhood was ideal in that the Barretts lived in a lovely setting, a country house called Hope End. She was an excellent rider and enjoyed growing up with her many siblings.

Though she never received any formal education, Elizabeth loved to read. By age eight she had learned to read Homer in the original Greek and had begun to write poetry. In 1819 her father had printed fifty copies of her classic "The Battle of Marathon." In 1826 she published anonymously (without her name), An Essay on Mind, with Other Poems, an attempt, as she later noted, to survey history, science, metaphysics (the fundamental nature of reality and being), and poetry from classical Greece to the Victorian day in eighty-eight pages. Elizabeth's fascination with metaphysics and religion became somewhat of an obsession that she described as, "not the deep persuasion of the mild Christian but the wild visions of an enthusiast."

Elizabeth's youthful happiness was not to last. In 1821 she began to suffer from a nervous disorder that caused headaches, weakness, and fainting spells. Some sources trace this lifelong illness to an impatient decision to harness her own horse at age fifteen. Reportedly she fell with the saddle on top of her, damaging her spine. An ongoing prescription for opium (an addictive drug used to relieve pain) was probably a life shortening remedy but a common one for the times. Her mother's health was also unstable. When Elizabeth was twenty her mother became fatally ill. Meanwhile, her father had lost all of his wealth. Rather than move immediately, he refinanced beyond any possibility of repayment so that Mrs. Barrett would never have to leave her beautiful home. After her death, Elizabeth and her family left Hope End forever.

Barrett continued her poetic career in 1833 with the anonymous publication of Prometheus Bound: Translated from the Greek of Aeschylus, and Miscellaneous Poems. Two years later the Barretts moved to London, England, and in 1838 settled permanently at 50 Wimpole Street. Here Elizabeth started literary friendships that encouraged her writing. During the same year Elizabeth published her first book under her own name, The Seraphim and Other Poems. Though these poems are often filled with heavy-handed sorrow and moral messages, the critics hailed her as a new poet of "extraordinary ability."

In 1838 Barrett's illness worsened and she relocated to a sea resort for her health. Her favorite brother Edward stayed with her. Two years later Edward drowned after a disagreement with Elizabeth. This shock worsened her poor health. For the next five years she remained in her room and saw no one except her family and a few close friends. In 1844, however, the publication of Poems secured her fame. Such poems as "The Dead Pan" and "Lady Geraldine's Courtship" seem shrill and sentimental to today's readers, but they were very popular with Victorian readers and won high praise from critics both in England and the United States.

By far the most significant result of Poems was the beginning of Barrett's relationship with the poet Robert Browning (1812–1889). Attracted by her praise of his poetry, Browning wrote to her on January 10, 1845, and thus began England's most famous literary love affair. Barrett's illness had led her to feel "completely dead to hope of any kind." Six years his senior and an invalid, Elizabeth could not believe her good fortune. Her progress out of despair into hope and finally joy can be traced in her letters to Browning and in her Sonnets from the Portuguese, written during their courtship and expressing her love for him. The world-famous romance line, "How do I love thee, let me count the ways" comes straight from these sonnets. Because Elizabeth's father had forbidden any of his children to marry, the couple was secretly married on September 12, 1846. In anger and frustration, Mr. Barrett refused ever to see his daughter again. Fortunately Elizabeth had inherited other money.

The Brownings journeyed south through France to Italy. Casa Guidi in Florence was their home for the rest of Mrs. Browning's life. There her health was so improved that on March 9, 1849, she gave birth to a son, Robert Wiedeman Barrett Browning. In 1850 Browning issued a revised edition of Poems containing the Sonnets from the Portuguese, which her husband had urged her to publish. Modern readers usually find these sonnets her best work. But Victorian readers much preferred her Aurora Leigh, a long poem in blank verse (unrhymed verse) published in 1856.

The major interest of Browning's later years was the Italian struggle for unity and independence. (Until 1859 Italy was a part of Austria). Her keen commitment to social justice is evident in both Casa Guidi Windows (1851) and Poems before Congress (1860). In these she attempted to win sympathy for the Italian cause.

This emphasis on social justice led to her poem, A Curse For A Nation, to be published in a Bostonian abolitionist (antislavery) journal. Elizabeth's 1857 publication of Aurora Leigh featured an artist heroine committed to social reform but thwarted by the male domination of the age. Some call it autobiographical. Years later Virginia Woolf (1882–1941) called this heroine, "the true daughter of her age." Woolf's praise attracted many modern readers to Elizabeth Barrett Browning's work. Elizabeth was a primary inspiration for Emily Dickinson (1830–1886) as well. No nineteenth century female poet was more esteemed than Elizabeth Barrett Browning.

i found this info very interesting! i would love to read more about Mrs. Browning