"Godfather of Soul" James Brown unleashed a string of rhythm-and-blues hits through the 1960s and early 1970s. His influence and work ethic earned him the reputation as "the hardest-working man in show business."

James Joe Brown Jr. was born on May 3, 1933, in Barnwell, South Carolina, to Joe and Susie Brown. His mother left the family when James was only four years old. His father, looking for work, moved the remaining family to Augusta, Georgia, to live with an aunt, who oversaw a brothel (a house for prostitutes). Growing up, Brown was heavily influenced by jazz and rhythm-and-blues, two musical types dominated by African Americans. Other influences were the circuses and traveling shows with their variety of acts, both singing and dancing.

But Brown's musical dreams were soon drowned out by his tough childhood. He grew up fast, and by his teens Brown had drifted into crime. At sixteen he went to jail for multiple car thefts. Though initially sentenced 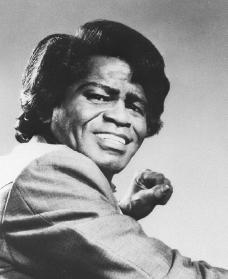 James Brown.
Reproduced by permission of
AP/Wide World Photos
.
to eight to sixteen years of hard labor, he got out in less than four years for good behavior. After unsuccessful attempts at boxing and baseball, he formed a gospel group called the Swanees with his prison pal Johnny Terry.

"The Hardest-Working Man in Show Business"

The Swanees shifted toward the popular mid-1950s "doo-wop" style and away from gospel, changing their name to the Famous Flames. Brown sang lead and played drums; their song "Please, Please, Please" was released as a single in 1956 and sold a million copies. By 1960 the group had become the James Brown Revue and was generating proto-funk dance hits like "(Do the) Mashed Potato." Deemed the "King of Soul" at the Apollo Theater, New York City's black music capital, Brown proceeded over the years to burn up the charts with singles like "Papa's Got a Brand New Bag," "I Got You (I Feel Good)," "It's a Man's Man's Man's World," "Cold Sweat," "Funky Drummer," and many others.

Brown's unique style mixed a handful of influences, but his intensity of punctuating vocal sounds—groans, grunts, wails, and screams—came right out of the southern church. His calls to sax player Maceo Parker to "blow your horn," and trademark cries of "Good God!" and "Take it to the bridge!" became among the most recognizable catch-phrases in popular music. His band—though its members shifted constantly—maintained a reputation as one of the tightest in the business. Starting and stopping on a dime, laying down merciless grooves, it followed Brown's lead as he worked crowds the world over into a frenzy. Brown adopted a series of extravagant titles over the years, but during this period he was known primarily as "The Hardest-Working Man in Show Business."

The increasingly militant stance of many African American activists in the late 1960s led Brown—by now among an elite group of influential African Americans—to flirt with the "Black Power" movement. Even so, the singer generally counseled nonviolence and won praise from President Lyndon B. Johnson (1908–1973) when a broadcast of his words helped head off a race riot. He was also saluted by Vice President Hubert Humphrey (1911–1978) for his proeducation song "Don't Be a Dropout." Brown's music did begin to incorporate more obvious political messages, many of which stated his belief that African Americans needed to take control of their economic destinies.

The year 1970 saw the release of Brown's powerful single "(Get Up, I Feel Like Being a) Sex Machine," a relentless funk groove featuring several hot young players, notably Bootsy Collins and his brother Phelps, also known as "Catfish." Brown soon signed with Polydor Records and took on the nickname the "Godfather of Soul," after the highly successful movie The Godfather. Further refining his hard funk sound, he released hits like "Get on the Good Foot," "Talking Loud and Saying Nothing," and "Soul Power." With the 1970s box-office success of black action films—known within the industry as "blaxploitation" pictures—Brown began writing movie soundtracks, scoring such features as Slaughter's Big Rip-Off and Black Caesar.

James Brown may have been one of the biggest pop stars in the world, but he also found himself in a fare share of trouble. In 1975 the Internal Revenue Service (IRS) claimed that he owed $4.5 million in taxes from 1969 to 1970, and many of his other investments collapsed. His band quit after a punishing tour of Africa, and most tragically, his son Teddy died in an automobile accident. Brown's wife later left him, taking their two daughters.

By the late 1970s, the arrival of disco music created career problems for the "Godfather of Soul." Things improved slightly after Brown appeared as a preacher in the smash 1980 comedy film The Blues Brothers, but his big comeback of the 1980s came with the release of "Living in America," the theme from the film Rocky IV, which he performed at the request of movie star Sylvester Stallone (1946–). The single was his first million-selling hit in thirteen years. As a result, Brown signed a new deal with CBS Records; in 1986 he was inducted into the Rock 'n' Roll Hall of Fame. "Living in America" earned him a Grammy Award for best R&B performance by a male artist.

Through it all, Brown had been struggling with substance abuse. In May of 1988 he faced charges of assault, weapons and drug possession, and resisting arrest. In December he made national headlines when he was arrested again after leading police on a two-state car chase and was sentenced to six years in State Park Correctional Facility in Columbia, South Carolina. His confinement became a political issue for his fans, and Brown was ultimately released in early 1991.

Unfortunately, Brown's troubles were not at an end. In December of 1994, he was charged with misdemeanor domestic violence after a confrontation with his third wife, Adrienne. And on October 31, 1995, Brown was again arrested for spousal abuse. He later blamed the incident on his wife's addiction to drugs, stating in a press release, "She'll do anything to get them." Just over two months later, Adrienne died at the age of forty-seven after undergoing cosmetic surgery.

But things seemed to be getting back on track for Brown. In 1998 he released the album I'm Back and in 2000 he was inducted into the Songwriters' Hall of Fame at a New York ceremony. The following year, he married his girlfriend of three years, singer Tammie Rae Hynie.

Brown's ability for survival and the shining legacy of his work managed to overshadow such ugly incidents. "I came from nothing and I made something out of myself," Brown commented in a New York Times interview. "I dance and I sing and I make it happen. I've made people feel better. I want people to be happy."