Louis Brandeis was a lawyer who dedicated his life to public service, earning the nickname the "people's attorney." As an associate justice of the U.S. Supreme Court, he tried to balance the developing powers of modern government and society with the defending of individual freedoms.

Louis Dembitz Brandeis was born on November 13, 1856, in Louisville, Kentucky, to Adolph and Fredericka Dembitz Brandeis. His parents were Bohemian Jews who had come to America after the revolutionary movement of 1848 to create an independent Bohemia failed and was crushed by Austria. The Brandeis family was educated, and they believed in strengthening the processes of democracy in order to protect the common man's dignity and right to self-development.

Brandeis lived and studied in Europe for three years after graduating from Louisville public schools at the age of fifteen. In 1875, at the age of eighteen, Brandeis entered Harvard Law School without a college degree, achieving one of the most outstanding records in the school's history. At the same time he tutored fellow students in order to earn money, which was necessary because of 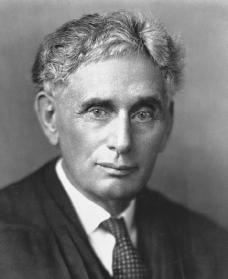 Louis Brandeis.
Reproduced by permission of the
Corbis Corporation
.
business losses suffered by his father. Although Brandeis was not the required age of twenty-one, the Harvard Corporation passed a special resolution granting him a bachelor of law degree in 1877. After another year of legal study at Harvard, he was allowed to practice law.

In 1879 Brandeis began a partnership with his classmate Samuel D. Warren. Together they wrote one of the most famous law articles in history, "The Right to Privacy," published in the December 1890 Harvard Law Review. In it Brandeis stated the view he later repeated in the Supreme Court case of Olmstead v. United States (1928): he argued that the makers of the Constitution, as evidence of their effort to protect Americans, intended for people to have "the right to be let alone … the right most valued by civilized men." During this stage of his career, Brandeis spent much time helping the Harvard Law School. Though he declined an offer to become an assistant professor, in 1886 he helped found the Harvard Law School Association, a group of alumni (graduates of the school), and he served for many years as its secretary.

By 1890 Brandeis was earning good money as a lawyer and was able to serve, without pay, in support of various public causes. When a fight arose, for example, over preservation of the Boston subway system, he helped save it. He also helped lead the opposition to the New Haven Railroad's attempt to remain the sole provider of transportation in New England. He worked to change Massachusetts' liquor laws in an attempt to prevent liquor dealers from bribing lawmakers rather than complying with the laws. The Massachusetts State Legislature's adoption of a savings-bank life insurance system was the result of his investigation of the problems of existing insurance programs.

Brandeis also took part in the effort to bring legal protections to industrial workers, and as part of this effort he contributed a major idea to the Supreme Court legal process. In 1908, while defending an Oregon law that established fair wages and hours for women laborers, Brandeis introduced what came to be known as the "Brandeis brief." In the brief he took into consideration the various factors that had led to the passing of the law. Many lawyers followed the Brandeis brief. In their arguments they presented scientific evidence and expert opinion on the social problems of the day that were reflected in court cases.

Appointment to the Supreme Court

President Woodrow Wilson (1856–1924) offered Brandeis a position in his Cabinet in 1913, but the Boston lawyer preferred to remain simply a counselor to the president. Brandeis continued his investigations into the growing concentration of wealth in large corporations and such effects on democracy. In 1914 he published Other People's Money, and How the Bankers Use It, in which he set down his views in opposition to corporate growth.

Wilson's nomination of Brandeis to the Supreme Court on January 28, 1916, started a dirty political fight. Six former presidents of the American Bar Association and former president of the United States William Howard Taft (1857–1930) criticized Brandeis for his "radical" (extreme) political views. Some anti-Semitism (prejudice against Jewish people) was involved, as Brandeis was the first Jew ever nominated for America's highest court. Finally, however, the fight was won in the Senate, and Brandeis took his seat on June 5, 1916, where he served with distinction until his retirement on February 13, 1939.

Brandeis often joined his fellow justice Oliver Wendell Holmes Jr. (1841–1935) in disagreeing with the Court's willingness to make judgments about fiscal (economic) and social policy that opposed those of individual states. Also with Holmes Brandeis bravely defended civil liberties throughout this era. When he did approve of wide use of state powers, it was only in the interest of furthering individual self-fulfilment. He also rejected the ability of states to infringe upon (take away from) a citizen's liberty. Two examples are the Olmstead case, which involved wiretapping, and Whitney v. California, in which Brandeis opposed a California law prohibiting free speech.

Brandeis married Alice Goldmark in 1891, and they had two daughters. Part of his personal life was his commitment to fellow Jews. He became a leading supporter of the movement to develop an independent Jewish nation in Palestine. Another of Brandeis's great interests was the building up of strong regional schools as a means of strengthening local areas against the threat of national control of education. To this end, beginning in 1924, he helped plan and develop the law school and general library of the University of Louisville.

Brandeis died on October 5, 1941. His commitments to justice, education, and Judaism were honored several years later in the founding of Brandeis University in Waltham, Massachusetts.