The German composer (writer of music), pianist, and conductor Johannes Brahms was one of the most significant composers of the nineteenth century. His works combine the warm feeling of the Romantic period with the control of classical influences such as Johann Sebastian Bach (1685–1750) and Ludwig van Beethoven (1770–1827).

Johannes Brahms was born in Hamburg, Germany, on May 7, 1833, the son of Johann Jakob and Christina Nissen Brahms. His father, an innkeeper and a musician of moderate ability, taught him to play violin and piano. When Brahms was six years old he created his own method of writing music in order to get the melodies he created on paper. At the age of seven he began studying piano under Otto Cossel. He played a private concert at the age of ten to obtain funds for his future education. Also at ten years old he began piano lessons with Eduard Marxsen (1806–1887).

To help out his family, Brahms gave music lessons and played the piano in taverns and local dance halls while in his early teens. The constant work proved to be a strain on him and affected his health. Brahms was offered a chance to take a long rest at Winsen-an-der-Luhe, Germany, where he conducted a small male choir for whom he wrote his first choral compositions. Upon his return to Hamburg he gave several concerts, but after failing to win recognition he continued playing at taverns, giving inexpensive piano lessons, and arranging popular music for piano.

In 1850 Brahms met the Hungarian violinist Eduard Reményi, who introduced him to gypsy dance songs that would influence his later compositions. In the next few years Brahms composed several works for piano. Reményi and Brahms went on several successful concert tours in 1853. They met the German violinist Joseph Joachim (1831–1907), who introduced them to Franz Liszt (1811–1886) at Weimar, Germany. Liszt received them warmly and was greatly impressed with Brahms's compositions. Liszt hoped to recruit him to join his group of composers, but Brahms declined; he was not really a fan of Liszt's music. Joachim also wrote a letter praising Brahms to the composer Robert Schumann (1810–1856).

In 1853 Brahms met Schumann and his wife Clara. Schumann's enthusiasm for the young composer knew no bounds. Schumann wrote articles praising Brahms and also arranged for the publication of Brahms's first compositions. During 1854 Brahms wrote the Piano Trio No. 1, the Variations on a Theme of Schumann for piano, and the Ballades for piano. Also that year Brahms was summoned to Düsseldorf, Germany, when Schumann had a breakdown and attempted suicide. For the next few years Brahms stayed close to the 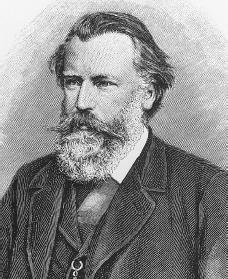 Johannes Brahms.
Courtesy of the
Library of Congress
.
Schumanns, assisting Clara even after Schumann's death in 1856. To earn his living, he taught piano privately but also spent some time on concert tours. Two concerts given with the singer Julius Stockhausen served to establish Brahms as an important song composer.

Works of the middle years

Brahms's Piano Concerto in D Minor (1858) was performed the next year with Joachim conducting in the German cities of Hanover, Leipzig, and Hamburg. Only in Hamburg was it favorably received. Brahms was also appointed conductor of a ladies' choir in Hamburg, for whom he wrote the Marienlieder. In 1860 Brahms became enraged after hearing claims that all musicians were accepting the experimental musical theories of the "New German" school headed by Liszt. He criticized many of these musicians in the press. During this period Brahms moved to Hamburg and buried himself in composing, throwing in frequent public appearances.

In 1863 Brahms gave a concert in Vienna, Austria, to introduce his songs to the Austrian public. Brahms also met the composer Richard Wagner (1813–1883) at this time. Although Brahms had criticized Wagner in the press, each was still able to admire some things in the other's work on occasion. In 1863 Brahms became conductor of the Singakademie in Vienna. A year later he resigned, but for the rest of his life Vienna was home to him. He began to do what he had always wished: to make composing his main source of income. As his fame and popularity grew, he composed more and more with only some occasional teaching and performing. In 1865 Brahms's mother, long separated from her husband, died. During the next year Brahms worked on the German Requiem in her memory.

The next years saw an increase in composing activity. Brahms's most important publications were the Variations on a Theme of Paganini for piano, the String Sextet in G Major, and several song collections. It is not always possible to date Brahms's compositions exactly because of his habit of revising a work or adding to it frequently. Thus, the German Requiem, practically finished in 1866, was not published in its final form until 1869. It was also given its first complete performance that year.

Brahms's father died in 1872. After a short holiday, Brahms accepted the post of artistic director of the Gesellschaft der Musikfreunde (Friends of Music) in Vienna. Masterpieces continued to pour from his pen. He composed, went on concert tours chiefly to improve his own music, and took long holidays. He now had plenty of money and could do as he pleased. He resigned as conductor of the Gesellschaft der Musikfreunde in 1875, for even those duties had become a burden to him. That summer he worked on his Symphony No. 1 and sketched the Symphony No. 2.

In 1880 the University of Breslau offered Brahms a doctor's degree, in appreciation of which he wrote two orchestral concert pieces. By this time he had discovered Italy, and for the rest of his life he vacationed there frequently. Vacations for Brahms meant composing, and he produced symphonies (long and complicated compositions for symphony orchestras), piano and violin concertos (music written for one or more instruments), and many other compositions and publications.

Much of the credit for the worldwide acceptance of Brahms's orchestral works was due to the activities of their great interpreter, Hans von Bülow, who had transferred his loyalty from the Liszt-Wagner camp to Brahms. Bülow exerted tremendous energy in seeing that Brahms's compositions received properly executed performances.

When he was about sixty years old, Brahms began to age rapidly, and his production decreased sharply. He often spoke of having arrived at the end of his creative activity. Nonetheless, the works of this last period are awesome in their magnificence and concentration, and the last of his published works, the Vier ernste Gesänge (Four Serious Songs), are among the high points of his career. Brahms's health took a turn for the worse after he heard the news of the death of Clara Schumann in 1896. On April 3, 1897, he died of cancer of the liver. He was buried next to Beethoven and Franz Schubert (1797–1828) and was honored by Vienna and the entire musical world.