American photographer Margaret Bourke-White was a leader in the new field of photo-journalism. As a staff photographer for Fortune and Life magazines, she covered the major political and social issues of the 1930s and 1940s.

Born in New York City on June 14, 1904, Margaret Bourke-White was the daughter of Joseph and Minnie White. (She 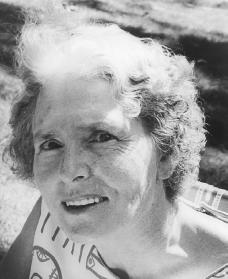 Margaret Bourke-White.
Courtesy of the
Library of Congress
.
added "Bourke," her mother's name, after her first marriage ended.) Raised in a strict household, Bourke-White attended local public schools in Bound Brook, New Jersey, after her family moved there. In high school Bourke-White served as the yearbook editor and showed promise in her writing talents.

Bourke-White attended several different universities during her moves back and forth from the Midwest and the East. She first revealed her talent for photography while a student at Cornell University in upstate New York, where she also completed her bachelor's degree in 1927. Using a secondhand Ica Reflex camera with a broken lens, she sold pictures of the scenic campus to other students. After graduation Bourke-White opened a studio in Cleveland, Ohio, where she found the industrial landscape "a photographic paradise." Initially specializing in architectural photography, her prints of the Otis Steel factory came to the attention of Time magazine publisher Henry Luce, who was planning a new publication devoted to the glamour of business.

In the spring of 1929 Bourke-White accepted Luce's offer to become the first staff photographer for Fortune magazine, which made its debut in February 1930. Her subjects included the Swift meatpacking company, shoemaking, watches, glass, paper mills, orchids, and banks. Excited by the drama of the machine, she made several trips to the Soviet Union (the former country made up of Russia and several smaller nations) and was the first photographer to seriously document its rapid industrial development. She published her work in the book Eyes on Russia (1931).

Bourke-White, working out of a New York City studio in the new Chrysler Building, also handled profitable advertising accounts. In 1934, in the midst of the Depression (a decade-long period of severe economic hardship in the 1930s), she earned over $35,000. But a Fortune assignment to cover the drought (a severe shortage of water) in the Midwest states opened her eyes to human suffering and steered her away from advertising work. She began to view photography less as a purely artistic medium and more as a powerful tool for informing the public. In 1936 she worked with Erskine Caldwell (1903–1987), the author of Tobacco Road, on a photo-essay revealing social conditions in the South. The results of their efforts became her best-known book, You Have Seen Their Faces (1937).

In the fall of 1936 Bourke-White joined the staff of Life magazine, which popularized the photo-essay. Her picture of the Fort Peck dam in Montana adorned the cover of Life magazine's first issue, November 11, 1936. On one of her first assignments she flew to the Arctic circle. While covering the Louisville flood in 1937 she composed her most famous single photograph: a contrast between a line of African Americans waiting for emergency relief and a billboard with a picture of an untroubled white family in a car and a caption celebrating the American way of life.

During World War II (1939-45; a war in which the Allies—Great Britain, France, the Soviet Union, and the United States—fought against the Axis—Germany, Italy, and Japan), Bourke-White served as a war correspondent affiliated with both Life and the U.S. Air Force. She survived a torpedo attack on a ship she was taking to North Africa and accompanied the bombing mission that destroyed the German airfield of El Aouina near Tunis. She later covered the Italian campaign (recorded in the book They Called It "Purple Heart Valley" ) and was with General George Patton (1885–1945) in the spring of 1945 when his troops opened the gates at Buchenwald, Germany, a concentration camp (a camp for prisoners of war). Her photos revealed the horrors to the world.

In December of 1949 she went to South Africa for five months where she recorded the cruelty of apartheid, the unfair social and political treatment of black people in South Africa. In 1952 she went to Korea, where her pictures focused on family sorrows arising from war.

Shortly after her return from Korea she noticed signs of Parkinson's disease, the nerve disorder which she battled for the remainder of her life. Her autobiography (the story of a person's own life), Portrait of Myself, was started in 1955 and completed in 1963. On August 27, 1971, Margaret Bourke-White died at her home in Darien, Connecticut. She left behind a legacy as a determined woman, an innovative visual artist, and a compassionate human observer.

Silverman, Jonathon. For the World to See: The Life of Margaret Bourke-White. New York: Viking Press, 1983.