Chuck Berry, known as the "father of rock and roll," has been a major influence on popular music. Though his career and life reached great peaks and declined to low valleys, he has survived while his contemporaries (others from the same time period) have vanished.

Charles Edward Anderson Berry was born on October 18, 1926, in San Jose, California. His father was a carpenter. Shortly after his birth, the family (he had three sisters and two brothers) moved to St. Louis, Missouri, where they lived a middle-class life. Berry sang in a church choir and a school glee club and took up the guitar in junior high school, learning how to play on his own. Before he could graduate from high school, Berry was arrested and convicted of armed robbery and served three years in a reform 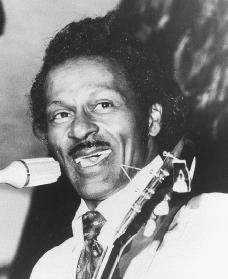 Chuck Berry.
Reproduced by permission of the
Corbis Corporation
.
school. A year after his release in October 1947, he was married and started a family.

Berry worked as a carpenter and a hair stylist after he was married, but he also continued to play guitar. In late 1952 a piano player named Johnnie Johnson called and asked him to play a New Year's Eve show at the Cosmopolitan Club in St. Louis. The band would play steadily at the club for the next three years. Berry's influence changed not only the band's name (to the Chuck Berry Combo) but also its style. The music was a mostly fast-paced combination of country, pop, and rhythm and blues. Berry also admired the comical sense of singer Louis Jordan, which he added to his performances.

In 1955, on the advice of blues great Muddy Waters (1915–1983), Berry contacted Leonard and Phil Chess, owners of Chess Records in Chicago, Illinois. They were interested in the young artist and put him in the studio. Within a few months one of Berry's songs, "Maybellene," was a hit. He went on to have a string of top ten hits, including "Roll Over Beethoven," "Rock and Roll Music," "Johnny B. Goode," and "Carol." Berry was also a popular live performer. He was known for his "duck walk," which he created as a child "scooting forward" under a table to chase a ball. Berry began to spend some of his newfound wealth—around 1957 he opened Berry Park in Wentzville, Missouri. With a guitar-shaped swimming pool, golf course, hotel rooms, and nightclub, it was, next to his fleet of Cadillacs, his pride and joy.

Things went smoothly until 1961, when Berry was found guilty of transporting a teenage girl across a state line for immoral purposes. He spent from February 1962 until October 1963 behind bars in Springfield, Missouri. During his prison term he took courses to complete his high school education and wrote songs such as "Tulane," "No Particular Place To Go," and "Nadine." By the time Berry was released from jail, groups such as the Beatles were recording versions of Berry classics and introducing his music to new audiences.

By the mid-1960s, though, Berry's type of rock was losing ground to artists such as Eric Clapton (1945–) and Jimi Hendrix (1942–1970) who were trying to break new ground. A switch from Chess to Mercury Records (1966–69) did little to help Berry. He continued touring without a regular backup band, using pickup bands made up of local musicians. In 1972 Berry, back with Chess, produced his biggest hit, "My Ding-a-Ling." It topped the charts on both sides of the Atlantic, selling two million copies. Berry had hit paydirt, but this only led to another run-in with the law. In 1979 he spent three months in a California prison after being convicted of failing to pay income tax.

Berry's legal troubles continued into his later years. In 1990 the police, acting on a tip that he was selling cocaine, raided his estate. The charges were later dropped. Berry was also involved in a class-action lawsuit brought by women who claimed they had been videotaped in the bathrooms of Berry Park without their consent. The lawsuit was settled out of court. Meanwhile, more collections of Berry's hits were released, including a live recording released in 1995.

While Chuck Berry's career has had peaks and valleys, he has survived while most of his contemporaries are long gone. Berry has been honored with both a star in the Hollywood Walk of Fame and an election to the Rock and Roll Hall of Fame. In 2000 he was honored for lifetime achievement at the Kennedy Center for the Performing Arts in Washington, D.C. And he continues to perform, reportedly accepting no less than $10,000 per show and playing for no more than forty-five minutes.

I have watched the cable version of hail, hail rock and roll over 50 times and can't get enough of it.

Not only do I not care if Chuck Berry has committed these crimes that people write about or care what folks think of him. He has come along with other black singers or broke ground for them to sing all these years.

As for all of the generation x bands robbing him of years of popularity do still think, that Chuck Berry can still be the Hiawatha king and melt anyones butter.

I grew up listening to Chuck Berry songs. At first I didn't think
that his songs would be stolen and made into big hits.

After watching his night into the Rock and Roll Hall of Fame did I come to appreciate him more.

Thanks for letting us Berry fans still give you some allocades that
you solely deserve.

Chuck Berry isn't one of... he is the greatest artist in rock n roll. Thanks for your article - my american english is not so perfect to express my admiration of Chuck!